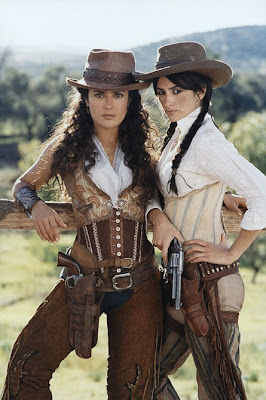 Following on from United Artists’ Viva Maria! of 1965, forty years on we get Penelope Cruz and Salma Hayek as the new Bardot/Moreau Mex bandidas in a buddy-movie supposedly set in 1880s Mexico. The only connection it has with Mexico or Mexican history is that it was filmed – and rather indifferently photographed – there. The protagonists wear utterly absurdly sexy costumes designed to show every curve and bulge, which, yes, OK, appeals to male audiences (inc yrs truly) but is of course laughable for the period. The dialogue is also maddeningly modern and their behavior equally ridiculous. Still, the film makes no pretense of being an authentic Western. It’s a 2000s sub-feminist sub-Western which allows young women to strut about in pants and gunbelts out-macho-ing the men. They seem to have used 90s junk movies such as the Sam Raimi The Quick and the Dead or Bad Girls as examples and Sharon Stone as role model.

Like Viva Maria! it is played for laughs, though there aren’t any. One reason is the dire writing (by Parisian Luc Besson, triumphant scenarist of the trash Taxi movies, and Robert Mark Kamen, no idea where he comes from, who had worked on epics such as the Karate Kid series and Lethal Weapon 3). Another reason is that the direction is leaden. There were two directors, both Norwegian: Joachim Rønnning, whose second film this was, and fellow auteur Espen Sandberg, ditto. Norwegian Westerns aren’t really my thing.

.
.
The acting is caricature and cartoonish. Nobody could say the lines Cruz and Hayek have to recite and sound convincing but they don’t even try. The only fun part was Dwight Yoakam, excellent as the totally evil American banker-gunman Jackson, with a derringer.
.

.
.
Also, the gauche detective Steve Kahn is a dead ringer for Michael Palin.
.
.
The movie was set for a big US-wide release but then pulled and came out late as an exclusive Cinema Latino Theatres chain release. No wonder. Probably no one went to see it, and they didn’t miss anything. Any Mexicans seeing it must have boggled at the portrayal of Mexico in the 1880s. Europeans produced many of these ‘Westerns’ over the years, many an attempt at comedy and many shockingly bad. It’s a wonder they get budget to make them. This one must have lost euros hand over fist.
.
.
It is to the Western what the Eurovision Song Contest is to popular song. Of course some people love Eurovision, and good luck to them..
PrevPreviousLaramie (NBC TV, 1959 – 63)
NextDay of the Evil Gun (MGM, 1968)Next