.
.
Watch it at your own risk
.
.
I have reviewed well over 1000 Westerns in this blog, the good, the bad and the downright ugly. I have reviewed junk spaghettis, Eurowesterns, serials, ultra-low-budget programmers, one-reeler silents and made-for-TV dross designed to fill up the schedules. They all have something. There’s a saving grace. The spaghettis had shocking color, lousy plots, Z-grade dialogue, appalling music and so on but maybe they had Lee Van Cleef in the lead or one good shot of a horseman on a skyline. Something.
. 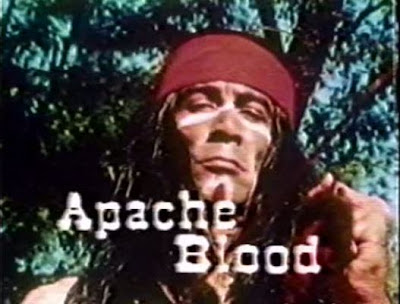 Well, almost all. Apache Blood, aka A Man Called She and Pursuit, is an extra-low-budget, very badly directed, boring film with rotten actors. It is almost a silent movie because there is little or no dialogue. Perhaps it was shot on VHS or perhaps the very low quality of the print I saw was a result of VHS being transferred to DVD. Anyway, it’s lousy.

The music is annoying.

A fat scout (Dewitt Lee) is pursued by a thin Apache (Ray Danton) and hobbles across Arizona for 89 interminable minutes. Danton is called Yellow Shirt because he wears a yellow shirt (but no trousers). There is a really stupid ending, then we are obliged to watch ‘highlights’ all over again in flashback.

It’s an ultra-low-quality exploitation flick with art pretensions that it dismally fails to live up to. You might think, well, if it’s that bad, I might watch it, for fun. Take my advice. Don’t. Just trust me. That way you won’t be mentally scarred.

PrevPreviousDay of the Evil Gun (MGM, 1968)
NextThe Life and Times of Judge Roy Bean (NGP, 1972)Next
Jeff Arnold © 2022 – All rights reserved – Designed by BetterCallChris
Scroll Up