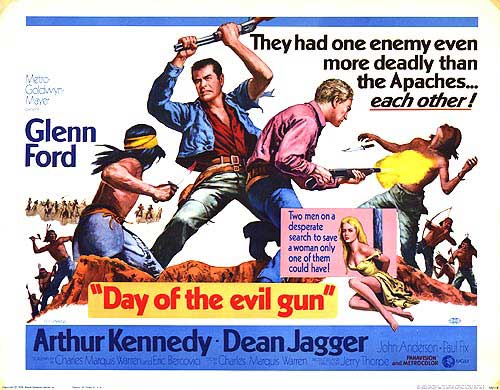 This picture got an MGM theatrical release but has all the air of a TV movie, and in fact was screened on ABC from 1972.
..
Day of the Evil Gun (lordy, what a title!) is pretty tedious. Thank goodness it had Glenn Ford in it; otherwise it would have been a total clunker. But Glenn was fine, always, in everything. He lifted a mediocre picture and saved a bad one.
.

.
There have been lots of ‘Day’ Westerns. Day of Anger, Day of Fury, Day of the Badman and so forth. Studios seem to like Days.
.

.
This one is about two guys who team up to rescue women taken by Apaches (it’s called Le Jour des Apaches in French). It’s a plot that goes right back to Fennimore Cooper. But The Searchers it ain’t. And you can’t really tell which of the guys is the goodie and which the baddie, except that Glenn’s one of them so it’s a bit obvious. But you can’t tell from their actions. Arthur Kennedy is the other. My, how he could overact.
.

.
It was filmed in Mexico by unstellar photographer W Wallace Kelley. Jeff Alexander did the music so it ought to have been alright. But it wasn’t. The dialogue was by Charles Marquis Warren so ought to have been at least passable. But it is wooden and ponderous. The acting, with the exception of Ford (even he looks overweight and tired) and John Anderson as a corrupt army officer, is universally dull. Dean Jagger, Harry Dean Stanton, Paul Fix, Royal Dano, great Western character actors all, but this time all poor. Perhaps with the script they had and the director, they couldn’t overcome those handicaps.
.

.
The director was Jerry Thorpe. Who? I hear you cry. Well, quite. He was a producer/director of a number of TV episodes of various shows. He didn’t helm any feature Westerns.
.

.
There are scenes when they ‘ride’ fake horses. I do hate that. Kennedy’s teeth are equally and equally obviously false. Perhaps it’s the teeth that lead him to call them aparches.
.

.
The women are just ciphers.
.

.
You’ll be getting the idea by now. This movie is not very good.
.