Any Gun Can Play (Fida Cinematagrafica, 1966)

See it if you absolutely must
. 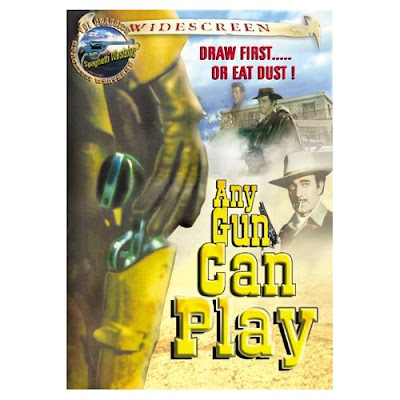 You can tell it’s a spaghetti within the first 15 seconds. It starts with a shot of horses’ hooves and then an ultra-close-up of faces. Bingo. Spaghetti. Why they were so obsessed with horses’ hooves is hard to say.
.
This one is directed by Enzo G Castellari, an actor in various Z-films who ‘graduated’ to directing such art movies as this, his first, or Sette Winchester per un Massacro, and Go Kill Everybody and Come Back Alone, and other masterpieces of this type.

It stars New Yorker Edd Byrnes (Ed Byrne was a gambler in Georgetown, Colo shot by Sheriff Pat Desmond but this fellow is no relation) in very 1960s hair (he combed it endlessly, you remember, in 77 Sunset Strip). Co-starring are Uruguayan ‘George Hilton’ (Two Sons for Ringo, Halleluja for Django, and so on, and so on) and good old standby Mexican Gilbert Roland, in his sixties, who provided the caddish mustache in any number of low-grade stuff and was famously The Cisco Kid.
.
So much for the acting.

As for the rest, it is standard spaghetti. Bad music, dubbing, absurd gunshots, facial close-ups, acrobats, all the clichés they love. I sometimes think that Cinecittà must have trawled the scuole medie (lower secondary schools) all over Italy in a recruiting drive to assemble the scriptwriters. The dialogue is so corny that only 13-year-olds could have written it. No fewer than six writers are credited to this film (I won’t bother to list them all). I think their combined age can’t have been more than 78.

There is a train. I wonder where they got it. It trundles across the flat lands (as we know, the trains in Spain stay mainly in the plain).
.
There’s a cheesy pop ballad over the opening and closing titles, as per usual.
.
The plot involves so many baddies (they are all baddies) double-crossing each other that the ending, after a ‘tense’ (ha ha) three-way Good, Bad, Ugly-style face-off, does at least come as a slight surprise.

It was made in 1967, released in ’68 but already the genre was becoming stale and tired and repeating itself.
.
See it if you absolutely must.