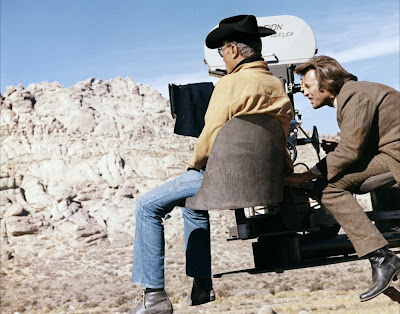 Early 1900s, somewhere down on the Mexican border (“Sinola County”). Clint Eastwood as Joe Kidd is just emerging from spaghetti gruntings into real characters although director John Sturges has obviously been watching a few spaghettis because we have jangly Lalo Schifrin music and a band of spaghetti-esque killers (they are quite good, in fact).

The qualities of this film come from four things: the acting, especially Eastwood and Robert Duvall but also some of the minor parts; the directing (Sturges was a good Western director, sometimes going beyond that into the very good, though there were complaints on this one that he had something of a drink problem); and the wonderful scenery, filmed in Panavision in the Inyo National Forest along the California/Nevada border by Bruce Surtees, surely one of the greatest Western cinematic photographers.

That’s three, you say. But of course the principal ingredient is the fact that it was written by Elmore Leonard and I don’t know of a bad Western by him. The story, characters and plot are gripping, authentic (especioally the firearms) and, well, just right.

The “charismatic” revolutionary Luis Chama (John Saxon) does not endear himself to us with his comment to his woman, “I don’t keep you to think. I keep you for cold nights and days when there’s nothing to do”. IMDb tell us, “In the original script, Luis Chama was a more heroic and multi-layered character, but Eastwood wanted to be seen as the hero, so this was changed throughout filming. Saxon said “Clint needed to be the guy who dealt with all the action, so in the end, Chama was smeared with self-serving and cowardice, so it was clear who the main hero was.” Saxon attended a NOSOTROS meeting, a Latin American organization opposed to stereotypes, and publicly apologized for playing such a dubious character.” Saxon was a very good actor in Westerns, I think.

The killers are brutal and very expert with their ultra-modern weapons. Their boss, Duvall, is the most ruthless of all. He finally gets his day in court.

There’s an important question of land rights underpinning the tale.

An excellent movie, produced by Eastwood’s company Malpaso, not in the Josey Wales or Pale Rider class, and certainly nowhere near Unforgiven in quality (after all, Clint didn’t direct this one – it was the last Eastwood Western to be directed by someone else, and Sturges later said he didn’t get on with Clint and wished he had resigned) but nevertheless it is by no means one of his worst and visually a treat.