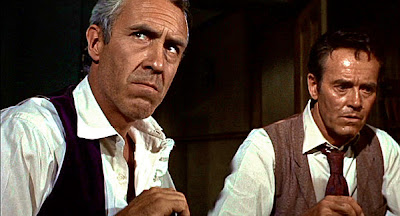 Not so much a Western as a poker movie set in the nineteenth century, A Big Hand for the Little Lady is still a whole lot of fun.

We are in Laredo in 1895 and the five richest men of the territory are playing their annual big-stakes card game in the dining room of a cattlemen’s hotel. They are Jason Robards, Charles Bickford, Kevin McCarthy, John Qualen and Robert Middleton, and casting is a strong point of this movie: the actors are excellent.

Along comes a perfect family traveling out to take up a farm in San Antone. It’s Henry Fonda, on the poker wagon, with his prim wife Joanne Woodward and a little son, 9-year-old Jean-Michel Michenaud (who acts satisfactorily until the penultimate scene, when he is positively brilliant). While wifey is getting their wagon fixed, Fonda, ignoring all the protests of his young son, joins the game. At first he loses all their savings and then the cards are re-dealt and…

That’s as far as I will go with a summary of the plot, in case you haven’t seen the movie. Just let me add that it’s clever, amusing, quite tense and a terrific tale. None of the acting is weak and we should mention especially Burgess Meredith as the doc and Paul Ford as CP Ballinger, the town banker, both clearly enjoying themselves and hugely entertaining to us. In fact, cast-wise, there isn’t a weak link.

Although the stupid strapline of the movie was “Join In The Thrills Of The Wildest Action In The West!”, this is not really a Western in any real sense. There’s no shooting or fighting. It’s almost all set indoors.

The French transposed the game to Dodge and called the film Gros Coup à Dodge City, heaven knows why, but the French are masters at dismally bad title translations.

It’s written by one Sidney Carroll, whose only big movie this was (he did a lot of TV stuff) but he did an excellent job on the screenplay with clever plotting and some good lines. It was produced and directed by Fielder Cook, who specialized in TV remakes of Hollywood classics. Again, though, he did a good job in this.

The music, photography and editing are all top drawer.

The word to use, I think, is gusto. All the actors perform with gusto. The film has energy and if you think a 95-minute movie about a poker game would be static, you’d be wrong. It’s a highly entertaining picture.

.
PrevPreviousDistant Drums (Warner Bros, 1951)
NextLast of the Dogmen (Carolco/Pathe, 1995)Next

PrevPreviousDistant Drums (Warner Bros, 1951)
NextLast of the Dogmen (Carolco/Pathe, 1995)Next
Jeff Arnold © 2022 – All rights reserved – Designed by BetterCallChris
Scroll Up