A Movie with Zip
. 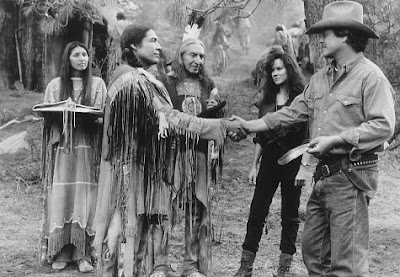 Isn’t it sad, and telling, that a film set in Montana has now to be shot in Mexico and Alberta. But such is (modern American) life and such is the the case of Last of the Dogmen.

As in many good Westerns, the wilderness plays a key part and in this movie the scenery is wild and beautiful. The basic idea is that ‘dog soldier’ escapees from the 1864 Sand Creek Massacre under Lone Wolf move north, and their descendants have survived undetected in an idyllic Cheyenne community in the “Oxbow Quadrilateral” in Montana. It’s a kind of Conan Doylish lost world. Tom Berenger discovers them and aided by his splendid mutt and a glamorous professor of Indian Archaeology, Barbara Hershey, treks off to a meeting of cultures. The film starts badly with slushy music by the LSO and an inappropriate helicopter shot but Tom soon leaves such modern imperfections behind and, ahorse and with pistol at his belt, crosses over the line into the wilderness and into the past. Into the Wild West, you might say.

The best actor is probably Zip, the dog, but the sheriff is played by Red of That 70s Show (Kurtwood Smith), who is excellent as a tough guy who blames his son-in-law Berenger for the death of his daughter. Berenger himself is also impressive as a tired, lonely man who finds a purpose in life. Hershey is OK although you kind of expect her to be wearing high heels and she is really too good to be true. 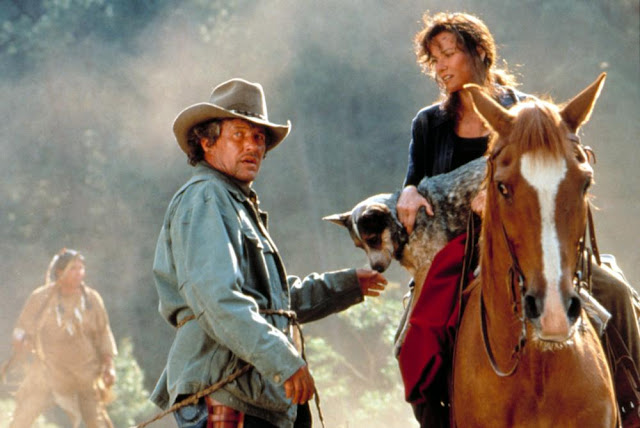 The Indians are clean and healthy and are led by Steve Reevis in the noble-savage role. They look splendid in their war get-up but their village life appears a bit twee and neat. Cheyenneland.

Of course the first instinct of the ‘civilized’ white men on hearing there might be Indians in the wild is immediately to organize an armed posse to shoot them all. Or maybe, worse, herd them onto some ‘reservation’.

The movie was written and directed by Tab Murphy who had worked on a lot of Disney films and Batman but who apparently loves the great outdoors. He had done Gorillas in the Mist so was up on slightly sentimental wildlife pics, and the dog soldiers here are portrayed rather as an endangered species only dangerous when threatened, a bit like gorillas, in fact.

Mr Murphy must like Conan Doyle and have read The Final Problem because we have a MT version of the Reichenbach Falls.

The David Arnold music is big, rolling stuff, too sentimental to be good. But the film is well photographed by Karl Walter Lindenlaub and deserves a big screen.

All in all, Last of the Dogmen is a picturesque movie that has a tough Western hero who saves the day, and is worth a watch.