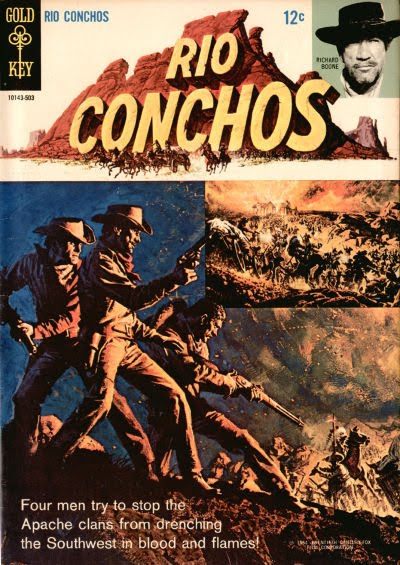 Two 60s Westerns which have quite a bit in common are Rio Conchos and 100 Rifles.

Rio Conchos was football star Jim Brown’s debut and by the time of 100 Rifles he was getting top billing, even above Burt Reynolds and Raquel Welch. Brown is sometimes called the greatest player in NFL history and his burly physique made directors have him remove his shirt whenever possible. This turned out to be quite often. To be brutally frank, he wasn’t much of an actor but if you needed a big black man in an action film (The Dirty Dozen, say) or indeed any of the many  blaxploitation movies of the 70s, Brown was your man.
.
.
Conchos was directed by Gordon Douglas, who churned out a lot of standard stuff but also occasionally came up with something interesting and fun. Conchos is in the interesting-fun class. Rifles was directed by Tom Gries, who also produced a lot of routine material but occasionally came up with a little gem – the excellent Western Will Penny being the obvious example and probably his finest work.
.
.
Both Conchos and Rifles were Fox Westerns with a Hollywood post-spaghetti look and feel about them, from the Rio Conchos cynical hero Richard Boone ready to slaughter Indians at any opportunity to the trendy pink credit titles of 100 Rifles. And loads of gunshots and corpses.
.
.
Both plots centre around a shipment of repeater rifles that risks going to the Indians and being 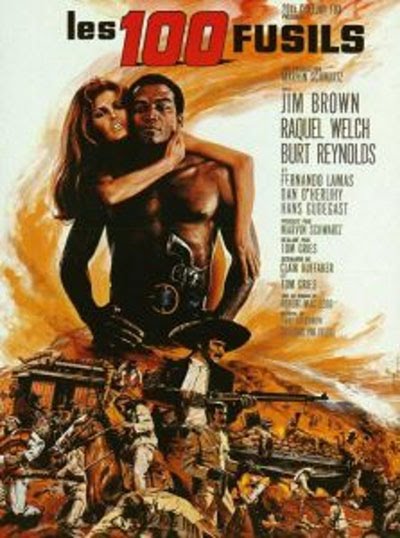 used to attack the Army. In the case of Rio Conchos, it is 1867 and the guns are destined for crazed Confederate officer Edmond O’Brien who wants to arm the Apaches with them and crush the bluecoats. In Rio Conchos we are in Mexico in maybe 1910 or ’11 and the sadistic ruler of the state of Sonora, General Verdugo (Argentine Fernando Lamas, who had provided the stock Mexican in countless movies for a quarter of a century by then; he is satisfactorily evil here with his twin pearl-handled .45 automatics) has to prevent the rifles going to the Yaqui Indians whom he is trying to exterminate.
.
.
Both movies have big, explosive finales. Both have something to recommend them, even if Rio Conchos was considered a pretty pulp Western at the time and The New York Times said of 100 Rifles, “‘This picture has a message: watch out.’ So proclaim the ads for 100 Rifles. Wise moviegoers can do even better by ducking it altogether.”
.
.
In both movies the Indians look like Apaches. Why did all movies have to show Indians in red headbands and long breechclouts holding Winchesters, regardless of their tribe? In Rio Conchos they are Apaches, so fair enough, but in 100 Rifles they are Yaquis. It is true, of course, that it was a really cool look so you can’t blame the costume department. The Indian leaders were rarely real Indians, of course. Rodolfo Acosta, a Mexican character actor, is Bloodshirt in the first and Raquel Welch is the Yaqui leader in the second, so a certain amount of, er, suspension of belief is required.
.
.
100 Rifles came out in the same year as The Wild Bunch. Is it a coincidence that both have stereotype German officers advising the wicked Mexican general and both generals ride about in a big open De Dion Bouton? Jim jumps over the automobile on his horse, Monte Walsh-style, to symbolize that cars aren’t properly Western and the horse is superior.
.
.
Both these movies are big, noisy and a lot of fun. Not art works, just Westerns. Rio Conchos ends in a wagon wreck with mucho fireworks. Rifles goes one better with that ultimate studio must-have, a train wreck. No expense spared. Cast of thousands. Hundreds, anyway.
.
. 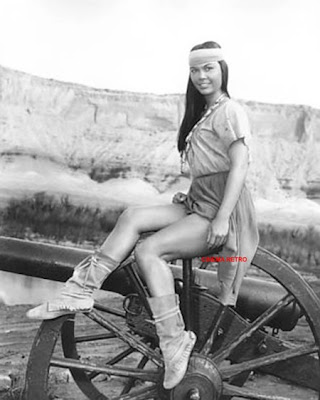 In Rio Conchos, a slightly overweight Boone, the year after Have Gun – Will Travel finished, is ‘Lassiter’, a bit cheeky but hey. He was an 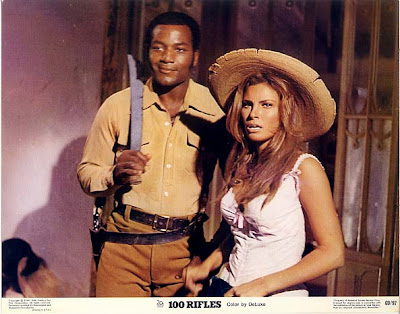 excellent tough Westerner. In 100 Rifles, Burt Reynolds gives us all his usual good/bad guy charm. Boone and Reynolds in these movies are both bad men who rather reluctantly find themselves on the side of the angels. Burt gets Raquel to fight alongside but Richard has to put up with the rather odd-looking Wende Wagner (left, in the dreadful publicity still). But they both get Jim to help anyway. Those shoulders do come in handy.
.
Both movies are worth a look, pards.
.
.
.
.
PrevPreviousBarquero (Universal, 1970)
NextWestern heroes are self-sufficientNext