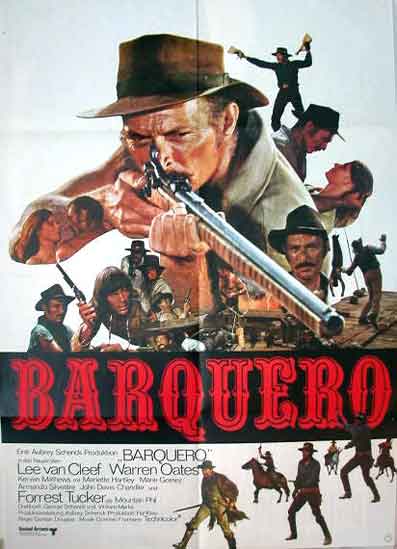 The reverse-engineering that took place in the ‘spaghetti comes to Hollywood’ period of the late 60s and early 70s is interesting, and Barquero is perhaps the most Italian of American Westerns. It has Lee Van Cleef with his curly pipe as cynical tough guy. It has garish color, corpses a-go-go and lots of close-up squints and grimaces. But unlike spaghetti westerns it has good acting, interesting characters, some thoughtful moments, Colorado scenery and tension. It’s actually quite a good Western, which no spaghetti ever was .
.
.
It was to have been directed by Star Trek maestro Robert Sparr but went to interesting director Gordon Douglas instead when Sparr was killed in a plane crash scouting Star Trek locations. Douglas is described by French film boffin Bertrand Tavernier as “a part-time auteur”, by which I think he meant that Douglas, as he himself admitted, cheerfully did a lot of bread-and-butter stuff the studios handed him, putting up with one-take Frank Sinatra and doing many less-than-epic comedies, but he had a vision and occasionally was able to stamp his personality on some quite interesting films. As far as Westerns go, he directed some good ones, such as Fort Dobbs, The Nevadan, The Fiend Who Walked the West or Rio Conchos.
.
.
. 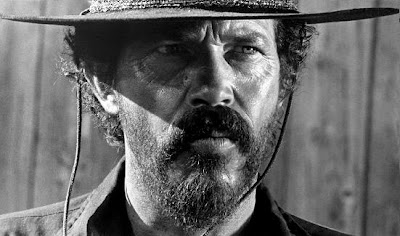 In Barquero we have an essentially static plot in which bandido leader Warren Oates (splendidly sliding into madness) wants to cross the river but is stuck because sturdy Lee Van Cleef has the ferry on the other side and won’t bring it back. The lack of movement is compensated for by early action as we see the violent robbery which causes the pursuit that Warren is fleeing from (the army’s behind him and that’s why he needs the barge) and a guerrilla raid as Van Cleef and a perfectly splendid Forrest Tucker as Mountain Phil swim across to rescue a hostage. And in fact the inaction in the rest of it builds the tension.

.
.
Warren and Lee spend some time staring meaningfully at each other across the river, adepts of two rather different kinds of Western. The bandit chief is contemplating his Charon. Marie Gomez is Lee’s cigar-smoking gal, a crack shot with a revolving rifle like Arthur Hunnicutt’s in El Dorado, although that’s where her similarity to Arthur ends, fortunately. Mariette Hartley is good as the wife of the hostage who loves her husband and will do anything to save him but whose lust for Lee also drives her. Some of Warren’s henchmen are also well done, notably Kerwin Mathews as his intelligent and dandified French lieutenant and John Davis Chandler as the unfortunate villain Fair. Forrest takes the biscuit, though. It’s a juicy part.

.
.
Warren smokes dope like Gian-Maria Volontè and shoots the river that he cannot cross. This was one of his best roles.

Say what you like about the spaghettis (and I do), they did inject some new blood (rather a lot of it, in fact) into the mainstream Western and ‘heroes’ like Lee Van Cleef and Warren Oates replaced the noble Pecks and Fondas and Coopers. They weren’t better, but they were different. .