From Hell to New Mexico
. 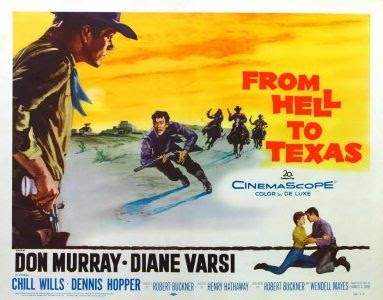 Henry Hathaway made only one really great Western. It was, of course, True Grit (Paramount, 1969). But he made several very good ones, and we would mention in this category The Sons of Katie Elder, Garden of Evil and, in this class, From Hell to Texas.

In fact Hathaway was something of a specialist in the genre. He started as a child actor in Westerns and the first films he directed were all cowboy movies.

Why the title From Hell to Texas it is difficult to know, as Texas doesn’t come into it. It’s set in New Mexico, between Santa Fe and Socorro (or Socorrer, as they all call it), well over 300 miles from the nearest bit of Texas. Never mind.

It’s a ‘small’ film, by which I mean it has a modest cast and has a confined plot (Robert Buckner and Wendell Mayes screenplay from a Charles O Locke novel) about few people. It is also an economical story with a spare, hard plot. It could have been by Luke Short (it’s that good). It is also extremely well directed and finely acted. Hathaway did an excellent job of reduction and Johnny Ehrin also edited tightly and effectively.

The acting is top notch. You wouldn’t automatically put Don Murray in the highest league of Western actors. He probably came to the Western genre just too late. Up till then he had been a TV and low-budget movie character actor. He was later Wild Bill Hickok in the 1966 remake of The Plainsman and he was also in The Hard Ride and played second to Alan Ladd in the ho-hum One Foot in Hell (he seemed to like Hell) – but that’s it really. Still, in From Hell to Texas he is very good indeed. He underplays and succeeds in projecting in a convincing way as a young, rather naive but still courageous loner.

RG Armstrong, always good, is here very fine. Apart from his curiously dudish double gunbelt, which makes him look like Hopalong Cassidy having strayed accidentally onto the set of The Wild Bunch, he is severe, hard as nails, single-minded and hated but, when it comes down to it, just. It could have been RG’s finest role, though it would be difficult to better his Bob Ollinger in Pat Garrett & Billy the Kid. Or his uxoricidal preacher in Ride the High Country.

Dennis Hopper, 22, plays RG’s youngest son, in only his sixth (I think) movie. He had the right to be in as many Westerns as he wanted, having been born in Dodge City. Jay C Flippen is excellent as the salty Indian trader Leffertfinger. But the best of the supporting cast is certainly Chill Wills as the rancher Amos Bradley who befriends Don and whose tomboy daughter Nita (Diane Varsi, not bad) will fall for Don and, eventually, vice versa. Harry Carey Jr has a smallish part too. So high class acting all round.

According to IMDb, the filming locations of this film were different from those of True Grit and the Alabama Hills up at Lone Pine, Cal are mentioned. Yet the scenery looked mighty like that which Hopper covered again a decade later for Hathaway, when he came up against Rooster Cogburn in that cabin on the river. And several bits looked very like Colorado to me. Wherever they are, they are splendid and I just love the Wilfrid (or Wilfred, he seemed to alternate) Cline photography. Visually, this film is lovely and some of the night scenes and long-shadowed early morning or dusk ones are actually beautiful. 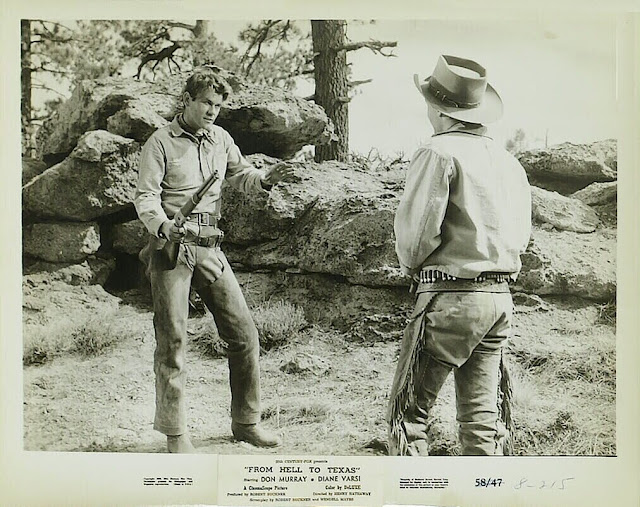 .
This is really a high-quality Western. Recommended.