The (not so) Great Train Robbery
.

The series of big commercial Westerns John Wayne made in the 70s were  successful at the box-office and have remained very popular. When they talk about Wayne, many people think of him in this way. The likes of Chisum, Big Jake and Cahill, US Marshal were big earners. And they weren’t bad either. No one would pretend they were of the quality of, say, The Shootist or True Grit, great movies of Wayne’s later life, but they were solid, actionful Westerns with high production values. 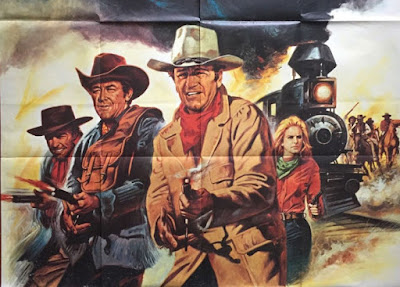 In many ways it had some great cards in its hand: for one thing, it was written by Burt Kennedy. That should have assured a tightly-plotted, snappy-action story with some good one-liners. It didn’t. Then there was Technicolor Panavision photography by William Clothier, and indeed the Durango locations are finely shot. But looking good doesn’t alone make it a top-drawer Western. Kennedy directed it too, and as a director, he made a great writer.
. 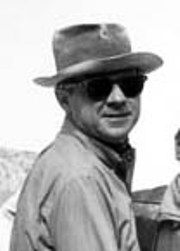 Burt directed, though with Duke on the set it probably needed kid gloves
It starts very well: we are in a ratty train halt that looks like a run-down Hadleyville. Once Upon a Time-like, we have no music, only Ben Johnson waitin’ on a train to the accompaniment of squeaks from the wind pump and wind-blown dust. It must be said that while Leone overdid it by miles, this take is pale in comparison. Amusing, however, how Leone quotes old Westerns in an Italian way and then commercial Waynery quotes it right back. Still, an encouraging opening. Johnson is there and that augurs well. But it’s all downhill from there, fans.
.
.

Kennedy quotes Leone right back at him

Ben seems tired (he was only 55). His partner Rod Taylor tells him in the script not to get old but he doesn’t appear to have listened. Taylor is unconvincing this time (he could be good) and Ann-Margret, who should have stuck to Elvis Presley pictures, acts drunk dreadfully badly and doesn’t do much better when sober. Wayne is OK in his tough-guy ex-soldier part, bossing everyone about in his toupée. Really, the acting isn’t up to much.

.
.
Much of the movie is taken up with the party (which numbers the mystical Western total of 7) going from Texas to Mexico and therefore moving from right to left on the screen (all Westerns with cowboys going to Mexico did this: see The Professionals as an example). And then in the second half they go back to Texas and so ride from left to right.
. 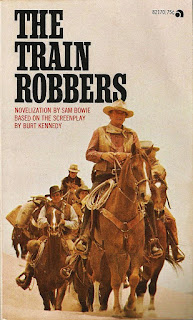 There was a novelization

One curious feature is that the bad guy (Ricardo Montalban) remains anonymous and entirely silent until the last two minutes of the movie and his twenty gunmen are faceless horsemen, extras with no characters at all. The action is limited to a gunfight in Mexico and a bit of dynamite-throwing, and a rather good blaze at the end. No one actually robs a train (though the gang ride off to do that at the end). There’s a trick ending. It’s all a bit of a yawn, really.

.
.
Western buffs will maybe smile slightly at one thing, though. Wayne is named Mr Lane and Ann-Margret is called Mrs Lowe. Batjac, founded in 1953, made much of Wayne’s 1953 Hondo (rightly, it was a fine film) and later adapted it for TV. Hondo’s surname in Hondo is, of course, Lane and he rides off into the sunset at the end with Mrs Lowe (although Ms Ann-Margret is no Geraldine Page).

.
.
Watch it. Well, you gotta. But don’t expect greatness.