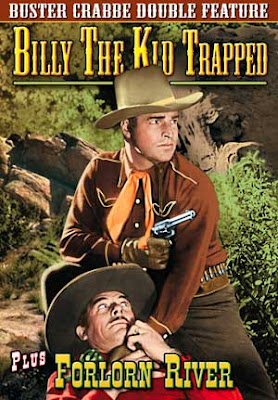 Smaller Billy the Kid movies from minor studios don’t have to be junk. They can be short, black & white, second-feature Westerns but still full of energy and fun and above all respectful of the genre.

Such a one is Billy the Kid Trapped. It’s a lively little Western in which a goody Billy the Kid (Buster Crabbe, ‘King of the Wild West’, with his horse Falcon), aided by his pardners Jeff Walker (Malcolm ‘Bud’ McTaggart) and comic old-timer Fuzzy Jones (Al St. John) find that they have doubles who are committing crimes, no less (why on earth would outlaws commit crimes, the film seems to ask) and getting the decent outlaws a bad name. This is an old wheeze, of course. Clayton Moore and Roy Rogers used it, among many others, when doing their Jesse James pictures.
.

Boss Stanton (Glenn Strange the Great) is a sort of clean-spoken Al Swearengen ante diem, a crooked town boss who aims to get the gold shipment and take over the whole town. But Deadwood-type dialogue, throat-cutting and, ahem, personal habits? Perish the very thought. This was the 1940s. Even the baddies were clean-living and clean-spoken. The greatest concession they might make to decadence would be to forget to shave.

It’s all set in northern Arizona for some reason, though shot in California. 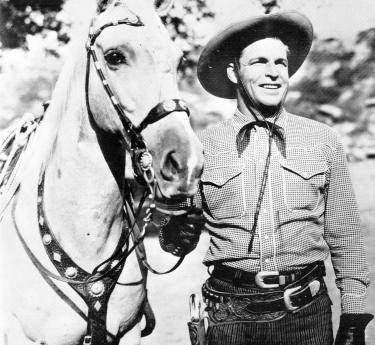 Billy is right-handed. That’s alright. He probably was.

There’s no music in the film, which is quite refreshing, actually, for a change.

The Western ticks a lot of the boxes: there’s a stagecoach hold-up, a brawl in the saloon, horse chases and bank robberies.

The gal is Anne Jeffreys and this was her first film. She’s OK but you get the impression that the average audience member would have wondered why you had to have a girl in it at all.

The film was one of a long cycle made in the 1940s, first starring Bob Steele as Billy, then Buster. The movies included Blazing Frontier, The Renegade, Cattle Stampede, and Western Cyclone. I give you this one as an example. True addicts can seek out the others. We’ve reviewed Billy the Kid’s Smoking Guns, for example, or Sheriff of Sage Valley (in that one Billy even becomes sheriff).

.
Buster Crabbe has a slight Marlon Brando look about him in this movie but Crabbe was a better actor.
.
Good stuff!
.
PrevPreviousDeadwood (HBO, 2004 – 2006)
NextLincoln NMNext