Another Billy book. So many have been written, I know, but this one can be kept in the top drawer. Lucky Billy (Houghton Mifflin Company, 2008) is a classy novel by John Vernon. 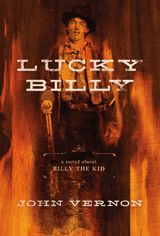 Its great quality is a rigorous adherence to what (little) is known about the so-called Billy the Kid. Reading it reminds us of reading Robert Utley, and it benefits from the same rigorous scholarship. This makes the story convincing. Furthermore, the hero is convincingly immature. He has no great weight. He is unsure, swaggering, confused – an adolescent.

Of course no one really knows the true Billy. We stare and stare at that famous tintype and we form our own impressions. To me, his mouth hangs stupidly open, he is overdressed, he holds the business end of his Winchester in a frankly idiotic and childish way, as if it were a toy. He has a swagger about him but also the look of an unintelligent youth with little understanding.

All novels and films invent their own Billies. This one will do as well as any because it is subtly drawn and passing well written.

There are weaknesses: scissoring the narrative and reassembling it in a different order is very modern. It can be clever, even witty, as when we finally discover why Vincent and Jules are wearing shorts, for example. But used to tell a complex story of the 1870s (and it is complex), the technique actually becomes tiresome. Even following the ins and outs of the Lincoln County War in a straightforward account like Utley’s is hard enough. Events jumping around in chronology like a jackrabbit being shot at don’t help one bit.

John Nichols (author of The Milagro Beanfield War) is guilty of hyperbole on the dust jacket when he says that this book is “as good as anything by Cormac McCarthy”. It isn’t, of course, and I am sure that Professor Vernon himself would not have claimed that. The writing is at times overblown, which McCarthy never is. This kind of sentence, for example:

The horse that rears up has just seen a rat, though how he spotted the vermin down there amid the boots, wheels, wagon tongues, skirts, handbills, canes, dogs, newspapers, legs, pushcarts, sandwich signs, single trees, double trees, the occasional pig, unlit lanterns hung beneath rear axles – not to mention nosebags, bustles, parcels, market baskets, baseball bats, grain sacks freighted on handcarts, wheelbarrows spilling feathers – and street Arabs ducking between and among crinoline dresses, chasing guttersnipes – and gouts of tobacco juice aimed at the interstices – is anyone’s guess.

It’s the kind of sentence that puts you in mind of Dr Johnson’s famous dictum: ‘Read over your compositions, and where ever you meet with a passage which you think is particularly fine, strike it out.’ It’s not even technically all that good – why would there be bustles down with the rats? And guttersnipes are street Arabs, are they not? But it’s the kind of sentence that wearies me reading it, never mind copying it out.

And there are other infelicities, such as Billy being put in mind of aircraft on seeing something flying, not a happy metaphor for a story set in the late 1870s.

Still, I don’t want to be picky and by and large the novel is elegantly crafted.

The Fort Sumner ending comes as something of an anti-climax, perhaps deliberately. Pat Garrett says “I didn’t feel much at all.” We don’t, either.

William Bonney (if that’s the name you choose) probably was a confused juvenile and so this novel comes close in capturing his character. If that’s your Billy. Of course, confused juveniles aren’t great moral heroes and don’t make great figures for stories or movies. But if you want that you can read the dime novels or watch the absurd films. This telling of the Billy tale has depth, even if Billy himself didn’t.