It was a magnificent achievement in 1969 to make such a fine film, the John Wayne True Grit, from such a great book, the 1968 novel by Charles Portis. This version has managed it again.
.
. 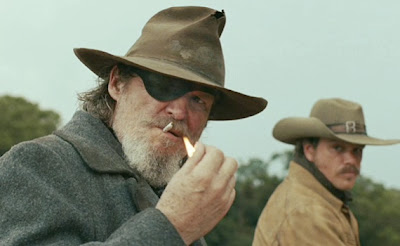 The movie is dominated by the magisterial performance of Jeff Bridges. He makes a truly fine Rooster, garrulous, aging, bibulous, though not perhaps quite as unscrupulous as Wayne’s or the book’s. The beard is fine. The voice is a bellow. I almost think he might have used Warren Oates in the 1978 TV version (True Grit: A Further Adventure) as a model more than John Wayne. Or maybe he just did his own thing.

He has a marvelous foil in Hailee Steinfeld. She is a remarkably mature thirteen-year-old. Almost too mature, in fact. She has an air of child prodigy about her with her knowledge of law and Latin. Her predecessor, though 22 at the time, seemed younger, somehow, a real frontier Miss. Also, Ms Steinfeld works hard on her diction but it does sometimes slip into modern teenspeak. 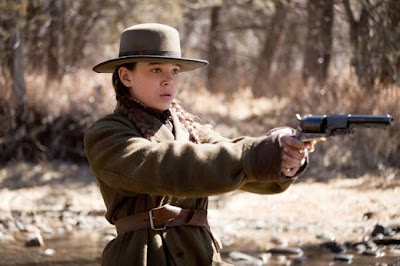 Matt Damon is ten times better as the Texan than Glenn Campbell was. He does benefit from a better script. The Coens have played up his rather naïve pride and some of the lines he has are very good. It’s odd that they wrote him out in the middle, and not very clear why. It’s also odd that Rooster and LaBoeuf “bow out”, giving up the chase. Other insertions, not in either the book or the 1969 film, are the corpse hanged high and the bear man. We wonder where they came from and why they are there. But they do add color and bring a slight touch of magic realism.

Perhaps because of the invented insertions, some things have to be left out. Mattie’s Presbyterianism has been cut, which is a pity because it is a fundamental part of the character. It’s a much more secular film. The only hint at religion is the variations on the theme of Leaning on the Everlasting Arms in the film score. (And I always think that the Everlasting Arms sounds like a pub).

And Rooster only has cornbread. Where are the Chinaman’s dodgers?

Of the other actors, Josh Brolin’s dialogue doesn’t ring true. He is Chaney and sounds labored with his Victorian grammar. No one could equal Strother Martin as Col. Stonehill but Dakin Matthews makes a fair stab at it.

I like the way the Coens have included the elderly Mattie seeking out Rooster in the Wild West Show and learning from Cole Younger and Frank James that he has passed on. It was a great scene and deserved to be in the ’69 film. Younger and James did in fact appear in an ill-fated and short-lived Wild West show in 1903.

I hesitate to compare the films too much because they are both so fine in their different ways (but have many similarities too). Furthermore, the Coens declared they weren’t doing a remake of the ’69 picture so much as their version of the book. This new one is more wintry. The Texas and New Mexico scenery standing in for Arkansas is lovely (so it was in the first one). The costumes and look of the places and characters are so good (as they are in all modern Westerns). Fort Smith is wonderful.

In all film versions of books much has to be cut. Fair enough. Sadly they often cut our favorite lines or episodes. But that’s a quibble. It’s an excellent film.

My joy at not having the Glenn Campbell ballad crooned over the opening titles was, however, mitigated when the Coens dubbed on the appallingly inappropriate braying of some female singer at the end. Whoever it was sounded like a wounded heifer in a railway tunnel and it jarred with and spoiled the rather moving ending.

But it’s a Western of real class, and isn’t it great that they are still making A-picture oaters?