.
.
Gobble, gobble
.
.
This picture reminds me a bit of the turkey How the West Was Won with its bloated budget, its length, its cast list led by Gregory Peck and a raft running the rapids. Columbia certainly put everything into it, and perhaps they wanted to out-MGM MGM. . 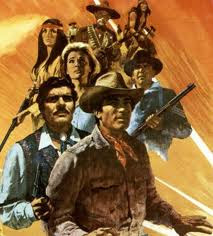 They chose a successful Brit director of big ‘exciting’ pictures (The Guns of Navarone, Cape Fear) to helm it, who, however, had no Western track record. They assembled a stellar cast: Peck, Omar Sharif as the Mexican bandit Colorado (well, he was foreign, wasn’t he?) to lead, and then in support Raymond Massey doing his overacting crazed preacher act, Edward G Robinson in blind man’s glasses, Eli Wallach, Burgess Meredith, Lee J Cobb (as “Samuel Fuller” – references, all these references), Anthony Quayle, all sitting round a camp fire waiting to get massacred. These famous support actors get one line bit-parts and thirty seconds’ screen time each.

The blonde love interest was provided by Swede Camilla Sparv, pretty much unknown and later to end up doing appearances in the Rockford Files, Hawaii Five-O, that kind of thing. Not exactly stellar, she, and Peck (running to flab) could have been her father, if not quite grandfather. Still, she was decorative.

The Arizona and Utah locations are certainly spectacular and Joseph MacDonald photographed them in Panavision, so it’s quite something on the big screen, although there are a lot of trendy odd visual tricks (helicopter shots supposed to be a buzzard’s-eye-view, or the camera on Peck’s back as he is dragged along behind a horse, for example) and for such a lavish picture there’s a surprising number of people bobbing up and down on fake horses and studio shots. There’s also too much silly speeded-up film. It’s very old-fashioned in this regard. 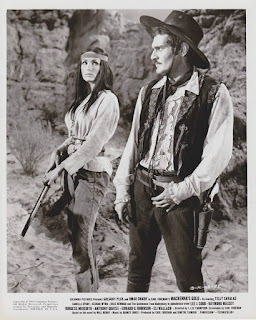 In the blessed days before special FX, the canyon was actually blown up for the earthquake scene. The pool where they dally and, of course, skinny-dip (funny how there’s always such a convenient pool in the desert in these movies) had to be man-made and the water trucked in.

In some ways it’s a Western (man against nature, stunning shots of the West, guns, bandits and Apaches) and it’s from a story by Will Henry but in fact it could have been set anywhere (Africa, for example) and it’s really just an adventure story of maps leading to secret treasure in a hidden valley of gold. Still, it was written by Carl Foreman of High Noon fame. .

Brian Garfield called it “a gargantuan dud of absolutely stunning dreadfulness”. So I don’t think he liked it. The New York Times reviewer was also stunned and in fact said it was “a Western of truly stunning absurdity”. Personally, I don’t reckon it’s that bad. A Foreman script, Peck as lead, Joe MacDonald behind the lens and Quincy Jones doing the music – they couldn’t make a total turkey. Could they?

Oh, alright then, they could. And I do admit, it isn’t very good. Sharif is just hopeless. Sparv couldn’t act. Telly Savalas as a crooked cavalry sergeant plays it like some low-grade war film. It has OTT sound (Derek Frye) with mega stereophonic dubbed-on effects, probably influenced by spaghetti westerns (take earplugs if you see it in a big movie theater). In fact, it’s a clunker.

See it once if it comes on TV (well, you gotta, it has Peck in it) but put that DVD back in the rack is my advice. 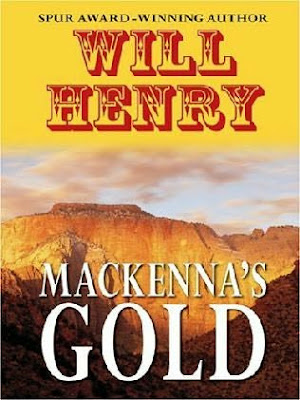