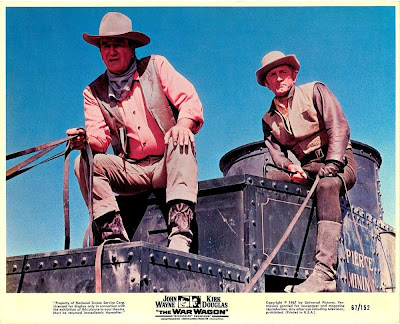 The War Wagon was another 60s Western in which Wayne, in exactly the same costume as about a million other Westerns, toughly righted wrongs, did away with the bad guys and got his ranch back at the end. Curiously, though, in this one he didn’t get the girl (Valore Noland). Robert Walker Jr did. Maybe the producers or Universal thought that at 60, Wayne was a bit past getting the girl.
.
The movie has the usual high production values: Clothier photography of Durango, Mexico locations (supposed to be New Mexico but we’re not proud), Tiomkin music (pleasant, though with a quite ghastly title song), Clair Huffaker screenplay from his own novel, so that’s good, and direction by Burt Kennedy (a better writer than director, but still). So it should have been quite good. And it is. Quite good. But this time, no more than that.
. 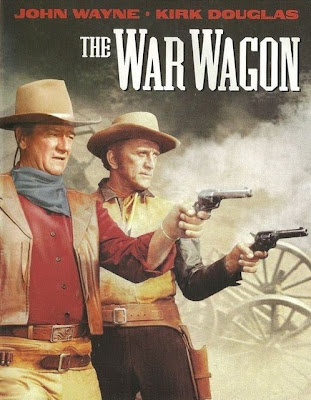 The story centers around bad guy Pierce (Wayne pal Bruce Cabot) who has “acquired” Wayne’s ranch and the gold that was on it. Wayne decides to hold up the armored stage with Gatling turret (the 2007 3:10 to Yuma copied it) which Pierce uses, in order to get the gold back. He is helped by a gang of Kiowa Indians led by Marco Antonio (these provide useful cannon fodder for the Gatling), the crooked freighter Keenan Wynn, a big Indian (Howard Keel), a former cellmate good at explosives, Robert Walker Jr, and, yes, safe-cracker extraordinaire and gun-for-hire Kirk Douglas.
.
It can’t have been easy for Kennedy, directing Wayne and Douglas in the same film.
.
Pierce, on his side, has loads of henchpersons including Bruce Dern, tragically written out almost immediately when Wayne & Douglas gun him down, trooper Gene Evans as the corrupt deputy, and others. Emilio Fernandez has a micro-part as a Mexican bandido leader who, when thwarted, throws down his huge sombrero and says Grrr in time-approved fashion.
.
The film is really a Western caper movie.
.
There’s a semi-comic saloon fight like 1 million others. Wayne said it was his 500th. He counted? You could certainly watch this Wayne Western, especially if you like those big commercial pictures he did in the 60s. It is quite fun. But…