The end of the buffalo 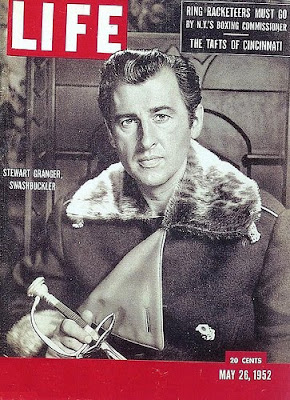 Brit Stewart Granger (born in posh Kensington, London in 1913; died in rich Santa Monica in 1993) had a good line in adventure films and Scaramouche-type sword-and-cloak dramas. But he was also unexpectedly good in Westerns.
One of his better efforts was co-starring with Robert Taylor (another matinée idol surprisingly convincing in Western roles) in The Last Hunt.
In reality, though, the tragic hero of this movie is neither Taylor nor Granger but the buffalo. To see these great shaggy, passive beasts, majestic on the big screen, dropped by rifleshot again and again until not a single one is left is heart-rending. There is a didactic strain to the movie, which sets out to show us how buffalo were hunted, and an ecological message quite advanced for its time – the mid 50s. All this and the fine Dakotas setting gives an almost National Geographic tinge to the film. But underneath that it’s still a good, gritty Western. 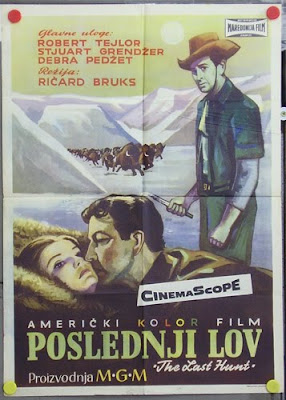 Robert Taylor buckled the odd swash too. He could be tough and hard, and was very good in Westerns. Stewart Granger could also handle being a hard-boiled Westerner. These two are complemented by a young ‘Indian’ kid, Russ Tamblyn, well known from Seven Brides for Seven Brothers the year before, with bright red hair, who although not so Indian does a good job really. There’s also a cynical old one-legged skinner, Lloyd Nolan, boozily excellent.

Debra Paget is there for the love interest and to give Taylor and Granger something to fight over. She does her Broken Arrow act (and come to think of it, the Granger role would have suited Jales Stewart “just fine”).

All in all, the acting is pretty good. Taylor’s character is a good case-study for Psychology 101 students working this week on paranoia and he also displays symptoms useful for next week’s course on schizoid psychosis. Boy, is he mean. Granger’s is sensitive, world-weary, conscience-stricken. The two pair off well and we know the final showdown is coming. It builds up all through the film.

The outcome is a cop-out on first impression but then we realize the rightness of it.

Granger did a couple of other Westerns – Gun Glory and North to Alaska, the latter with John Wayne and he was also Old Surehand in cinematic versions of three Karl May Eurowestern tales. 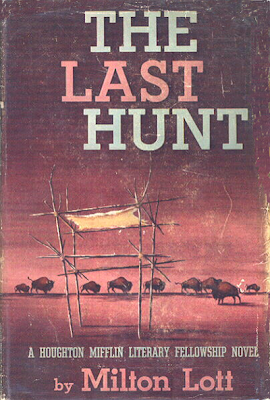 The Last Hunt contains some silly hokum about the bad karma that killing a white buffalo will bring but you can get past that OK. This film has a worthy message, teaching us the evils of blood-lust, indiscriminate hunting, Indian-hating and lack of respect for the environment.

It was directed and written by Richard Brooks, classy director of The Brothers Karamazov, Cat on a Hot Tin Roof, Lord Jim and so on, later to do The Professionals). Brooks used the long, rambling novel by Milton Lott but reduced it to the bare bones for this movie (and by the way, bare bones figure largely and prevent us forgetting the message).

Like all sermons, it does go on a bit but luckily the looming conflict between the two principals keeps us awake and it’s enough of a classic Western for us not to be overwhelmed by the earnestness.

There is some nice photography by Russell Harlan (although quite a lot of sound-stage shooting in the studio too) and I liked the dark music by Daniele Amfitheatrof, he of the great name.

Definitely worth a look. I think it’s rather good.