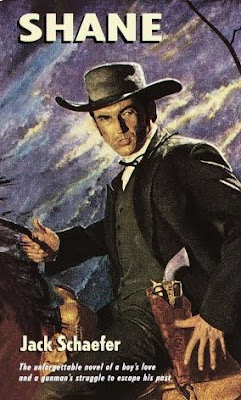 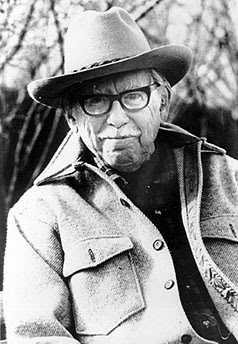 A fundamental theme of the book is “growing up.” Bob tells the story as a man, in retrospect, and there are many references to growing into manhood. The frontier is also growing into a stable society, with laws and churches and schools. The United States, indeed, is growing up as a nation. It was in fact a key theme of Schaefer’s, in many of his books. As John Ford so often underlined, this very act of maturation as “civilization” marched West, eroded exactly the noble and worthy qualities of independence, courage and self-sufficiency which had made the West what it was. Mr. & Mrs. Ransom Stoddard express this eloquently in The Man Who Shot Liberty Valance. Shane is a dinosaur. As is Fletcher, the cattleman, of course. The difference is, Shane says, that he knows it while Fletcher is trying vainly to turn back the tide.
Shane does have a wider appeal than merely “a Western”. Like all good writers (and Jack Schaefer was one), the author uses his setting, in this case the frontier, to illustrate people’s true natures and describe universal truths and qualities. Shane is certainly a key milestone for anyone interested in the Western myth, but it is also a damned good book. Edited version for schools: a very good book.
PrevPreviousThe Singer Not The Song (Warner Bros, 1961)
NextThe Rounders (MGM, 1965)Next