If it weren’t for the acting, direction and writing, September Dawn might be alright

Films which deal with Mormons and Mormonism have, I suppose, acquired a new level of topicality in this election year of 2012. There’s quite a long tradition of Mormon (or anti-Mormon) stories, going back to Zane Grey’s Riders of the Purple Sage in 1912 (though early cinematic versions of that story, such as Fox’s 1925 one with Tom Mix, tended to excise the Mormon aspect). In RKO’s 1950 Wagonmaster (or Wagon Master) John Ford made his Mormons cheerful, dancing, all-American settlers led by Ward Bond. They were definitely goodies. The very poor Savage Journey (1983) was a pro-Mormon whitewash.

In September Dawn, however, we see the other, dark side of Mormonism.

Now I’m not a Mormon, nor do I hate and despise Mormons. I have no axe to grind in this debate. But I do think film makers have a right to make both pro- and anti-Mormon pictures, as long as they are not gratuitously offensive, especially if the pictures are historical and the point of view can be backed up in some way, by some interpretation of history. So I have no problem with this movie on that score.

The trouble is, it’s a lousy film.

.
If it weren’t for the acting, direction and writing, September Dawn might be alright.

It tells the story of the Mountain Meadows Massacre of settlers by Mormons in Utah in 1857. In the film there is, of course, a handsome young Mormon (Trent Ford) who falls for a blonde settler girl (Tamara Hope) and he tries to avert the disaster but it all ends in tears. The actors’ diction is very modern, almost Valleyspeak, except for Jon Voight, who adds weight as the principal instigator of the evil, and Terence Stamp, ridiculous as Brigham Young, who tries valiantly to keep his cockney twang down. Their beards are good though.
.
. 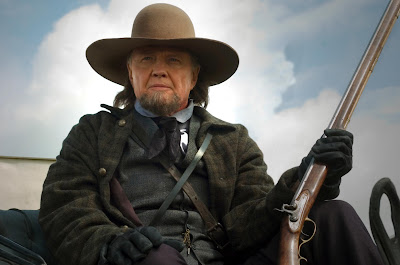 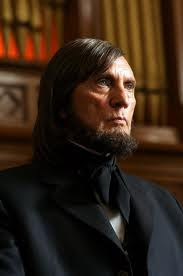 A Brigham Young from the East End

The writing is anachronistic. Brigham Young would never have said, “Everyone who passes through their endowment are placed under an obligation.” A lot of the dialogue is also lifted straight from The Bumper Book of Clichés.

The pacing is slow and uneven. A lot of the film is boring. The settlers in the wagon train are all angelic and syrupy and the Mormons are all totally evil. The actors are over made-up. Even their teeth are modern and perhaps reduced the producers’ bill for floodlights. The first sight is of a woman in pants, wearing a gun, riding astride a horse. The Mormon bishop later says it’s an abomination but the settlers think it’s quite normal and don’t bat an eyelid.
.
.

The director is Christopher Cain, who did Young Guns and some TV Westerns, including episodes of The Magnificent Seven series. I can’t say honestly that any of the above make his star shine bright in the Hollywood firmament.

The movie is almost watchable for two reasons:

1   There is some power to the portrayal of the evil that the extremely religious can do. It is not only the Mormon elders who decide to slaughter these people who are to blame (though they are chiefly to blame) but also the rank and file who merrily kill and rob.

2   The only quality acting really comes from Jon Gries as John D Lee, the unfortunate adopted son of Young who has to supervise the massacre. Here there is a hint of subtlety and uncertainty. Lee was the only one to be executed for the atrocity.
.
.

Mark Twain discusses the Massacre at some length in his wonderful book Roughing It of 1872. In Chapter XVII he says, “We were told … that the dreadful ‘Mountain Meadows Massacre’ was the work of the Indians entirely, and that the Gentiles had meanly tried to fasten it upon the Mormons.” He has a long appendix based on Mrs CV Waite’s book The Mormon Prophet of 1868. There is, of course, no doubt whatsoever that Mormon militia slaughtered the settlers, men, women and children over seven. It was not at all the work of the Indians.

I guess this film wasn’t too popular in Salt Lake City movie theaters. Not that that is a criticism in itself. Still, I prefer Riders of the Purple Sage, a Mormon story with quality.