Tom Horn in fact and fiction

Did he or didn’t he? 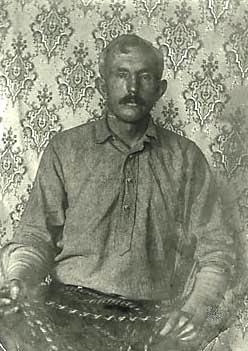 Thomas Horn Jr (1860 – 1903) is a very interesting figure to anyone who reads about the West. The big question, of course, stated or not, is always: was he a good guy or a bad one? Books and films about him tend to come down on the side of the former, and they may be right, although I don’t think anyone, least of all Tom himself, would claim that he was an angel or knight in shining armor. Of course you can be good and bad both but readers and viewers tend to prefer a more clear-cut answer.
.
. 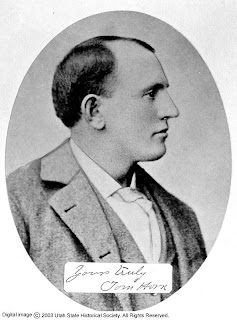 The books
Tom himself, with his faithful fiend, rancher John C Coble, wrote an autobiography, Life of Tom Horn: Government Scout and Interpreter (Louthan Book Company, Denver, 1904). It’s available on Google books.
Will Henry (Henry Wilson Allen) wrote a novel and a collection of short stories about Tom Horn: I, Tom Horn (1976) and The Hunting of Tom Horn (1999). The first, an imagined autobiography and essentially a filling-out and recasting of the Life of Tom Horn, is very good – though of course it is fiction.
Then there is The Saga of Tom Horn: The Story of a Cattlemen’s War by Dean Fenton Krakel and Chip Carlson’s Tom Horn: Blood on the Moon: Dark History of the Murderous Cattle Detective, as mentioned below. Those interested in the historical Tom Horn would have a very complete picture by reading the autobiography, the Will Henry novel and the books by Messrs. Krakel and Carlson.
If you put tom horn in the search box of amazon books you’ll get many titles. I haven’t read them; they may be good or they may not. You take pot luck!
. 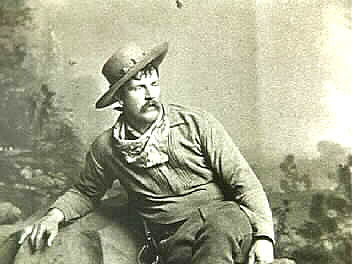 The movies
Tom Horn appears in five film Westerns (that I know of):
[He ‘sort of’ appeared in Hannah Lee (Independent, 1953) as Bus Crow, played by MacDonald Carey at the top of his form. In this 50s 3D, he’s a one-time hero fallen in decline who becomes a killer for hire. John Ireland is the marshal after him (and Mrs Ireland, Joanne Dru, is the third part of the love triangle). But this is only peripherally a Tom Horn movie, though he does act as a hired gun for Wyoming stockmen and does, accidentally, shoot a young boy.
.
. 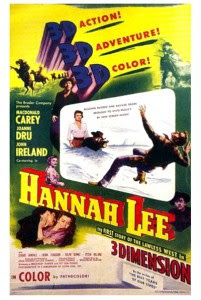 The same is true of Star in the Dust, 1956, in which Richard Boone plays a very Hornish figure, awaiting hanging for killing a boy in a range war.]

He first appeared under his own name in Bad Men of Tombstone (AA, 1949) played by Barry Sullivan. Bosley Crowther, witing in The New York Times, called it “a weary tale of a gang of desperadoes in the wide-open, gold-mining West.” He added, “Any one of 500 old scripts might have been used from which to shoot this fiction—or maybe no script at all. The actors and the director could have gone on the back-lot, we are sure, and done the whole thing from memory, including the dialogue.” So it wasn’t a very accurate Tom Horn.

Dakota Lil (Fox, 1950) has George Montgomery as a Lassiter-esque man-in-black Horn, a government secret service agent (rather than a Pinkerton operative) on the track of the skilled forger Lil (Marie Windsor) and Harvey Logan/Kid Curry (Rod Cameron), leader of the Wild Bunch. There is a vague semblance of truth in this story (see below) because Horn did work as a detective between his time in Arizona and the Johnson County War, on the track of Kid Curry. But Horn didn’t, as the movie suggests, bust up the Wild Bunch and kill Kid Curry (who anyway wasn’t the leader). 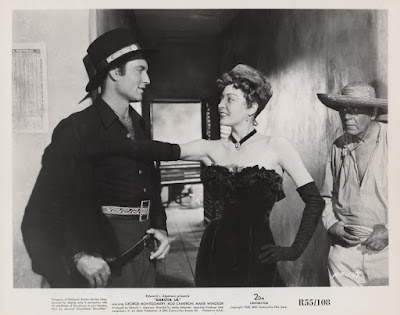 In Fort Utah (Paramount, 1967), John Ireland again, always a rather superior Western actor, moved on from Hannah Lee and played Tom himself in a story about fighting off renegade whites while escorting a wagon train through Indian country. It’s one of those AC Lyles ‘geezer westerns’ and the screenplay (Steve Fisher from an Andrew Craddock story) has, frankly, no connection with the real life of Horn at all. Those interested in the true story of Tom Horn can skip it and lose little. 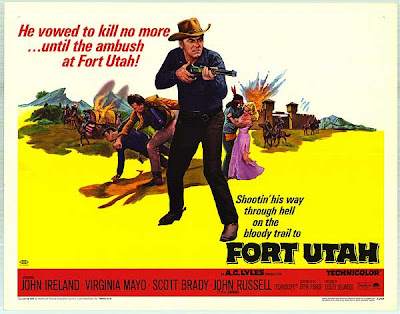 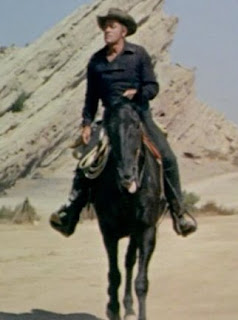 .
Two decades later, however, John Carradine played Tom in a 4-hour made-for-TV mini-series, Mr Horn (CBS, 1979). Directed by Jack Starrett, who plays General Crook in the movie, this version concentrates more on the Apache side in Arizona (Richard Widmark is Al Sieber) but then jumps to Wyoming. Of course, the capture of Geronimo is all Tom’s doing. So not too reliable historically, I’m afraid, pards! Still, the best Tom (and Sieber) film so far.
.
. 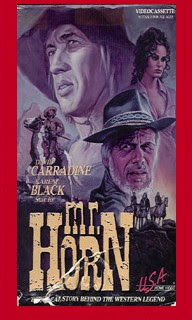 The History Channel showed an episode of the series Cowboys & Outlaws entitled Frontier Hitman about the life of Tom Horn.

The episode of Stories of the Century entitled Tom Horn which aired on 1 July 1954 (Season 1, Episode 24) was poor. It had nothing to do with the real Tom Horn, wasn’t very gripping and was a typical formulaic TV Western show. Willie Nickell, 14, became Henry Livingston, 16, and was shot in cold blood by Horn, with a pistol, after Horn had chased the boy on a wagon loaded with dynamite. Or something. Some of the episodes of this series weren’t too bad and did make at least an attempt at accuracy but some of them, like this one, were really bad. Tom Horn is played by Louis Jean Heydt who looks just like any other 1950s low-budget Western heavy in any other cheap movie. Nor is it explained why Matt Clark looks 45 years old whether he is rounding up William Quantrill in 1865 or Tom Horn in 1902. Lucky fellow.

But the main cinematic treatment of Tom Horn came along with Tom Horn (Warner Bros, 1980). I watched this again recently and I must say that it went up in my estimation. Apart from anything else, it is very attractive visually, with John A Alonzo cinematography of Arizona locations which manage to look amazingly like Wyoming.
.
. 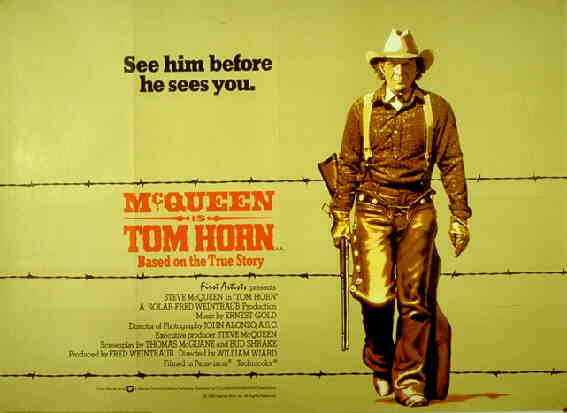 .
This version only deals with the last days and the Nickell murder. Steve McQueen is Horn (looking very ill, poor man) and I think he does it very well. He gives us the tough old veteran, a dinosaur of the Old West out of place in the new century. Of course he dallies with the local schoolteacher: that’s expected of all good Westerners and Tom is in Wyoming, the country of The Virginian after all. In fact, it does appear that Horn had an affair with Glendolene M Kimmell, a teacher. And, like all good Western heroes, he won’t stoop to justify or defend himself. He dies with an admirable courage.
.
. 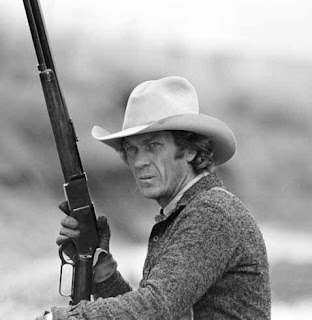 .
Some room for doubt is left open – he could have shot the boy – but the movie makes it pretty clear that he was innocent and the so-called confession was cooked up against him by the odious lawman Joe Lefors.
But what of the real Tom Horn?
Geronimo
Born on a Missouri farm, the fifth of twelve children, he left for the South West at the age of fifteen. He worked as an Apache scout under the great Al Sieber, rapidly learned fluent Mexican Spanish and the Apache tongue, and was wounded while pursuing Geronimo into Mexico when the men he was with were attacked by Mexican militia. Tom was present at Geronimo’s surrender in September 1886 and acted as an interpreter there.
The Pleasant Valley War
He then seems to have taken part in the Pleasant Valley War in Arizona, possibly as a killer for hire, but we don’t know for which party. There were murders on both sides in which no suspect was ever identified. Tom himself wrote, “Early in April of 1887, some of the boys came down from the Pleasant Valley, where there was a big rustler war going on and the rustlers were getting the best of the game.” He claims that he “became the mediator” of the conflict, serving as a deputy sheriff under three famous Arizona lawmen of the time, Buckey O’Neill, Commodore Perry Owens, and Glenn Reynolds. Whatever the truth, he wasn’t there for his skills as a Sunday school teacher, that’s for sure.
.
. 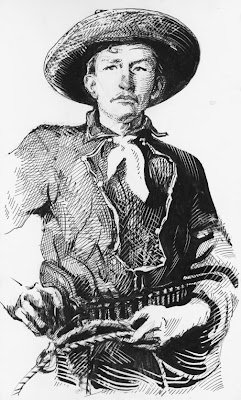 Pinkertons
Probably in early 1890 Tom was hired by the Pinkerton Detective Agency because of his great skills as a tracker. He worked all over the Rockies, out of the Denver office. He certainly had a reputation as a man who could find anyone and would not scruple to shoot a tracked miscreant if he had to. Charlie Siringo, another fascinating character, who wrote reminiscences, did not think well of Tom. While he respected Horn’s ability as a tracker, he had no doubt that he was a bad fellow. “William A. Pinkerton told me that Tom Horn was guilty of the crime, but that his people could not allow him to go to prison while in their employ.” Whatever the truth of it, Tom resigned from the Agency in 1894.
The Johnson County War
He next pops up employed by cattle owners in the Johnson County War in Wyoming. In 1895, Horn supposedly killed a known cattle thief named William Lewis near Iron Mountain in Wyoming. He was cleared of that crime and for another six weeks later, the murder of Fred Powell. In 1896, a rancher named Campbell who had a lot of money with him was last seen with Horn and “disappeared.” But all of this is circumstantial: Horn was never even charged with these crimes and may have been totally innocent.
.
. 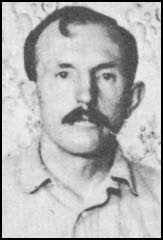 The Spanish-American War
Tom volunteered to serve in the Army when the Spanish-American War broke out. In the fall of 1898 he was ordered by General Miles to Tampa, Florida as chief pack master for Shafter’s army. He was given the rank of colonel and put in charge of transport, notably mules and horses.  “Having contracted the Cuban fever, Horn was compelled to return home before the close of the war. After a trying hospital experience, he went to the ranch of John C Coble [in Wyoming] which he thenceforth made his headquarters.” Coble and other cattlemen employed him as a “stock detective”.
The Wild Bunch
In 1900 Tom was working for the Swan Land and Cattle Company in Colorado where he killed two rustlers. He was involved (possibly in a private capacity for Pinkerton’s again) in the hunt for the Wild Bunch after the Wilcox Train Robbery and passed valuable information in that investigation to Charlie Siringo.
The murder of Willie Nickell
In July 1901, William Nickell, the 14-year-old son of a sheepman, was shot and killed with a long-range rifle. Tom Horn was arrested for the murder. An incompetent and boastful lawman, Joe Lefors (1865 – 1940), who keenly wanted a conviction in the Nickell crime, swore that Tom had bragged about his skill in shooting the boy from such a distance. This ‘confession’ is dubious to say the very least, especially as Tom was said to have been the worse for drink at the time he made the alleged comments.
Did Tom kill the boy or not?  It is still debated. Some historians such as Chip Carlson (Tom Horn: Blood on the Moon: Dark History of the Murderous Cattle Detective, 2001) believe he did not, while others like Dean Fenton Krakel (The Saga of Tom Horn: The Story of a Cattlemen’s War, 1988) believe that he did, but that he did not realize he was shooting a boy. Leaving aside the ‘confession’, there was certainly no conclusive evidence; it was all circumstantial and hearsay. A conviction would be unlikely today. In fact in a mock retrial in Cheyenne in 1993, Horn was acquitted.
.
. 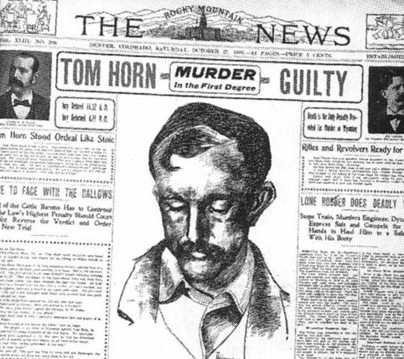 .
The fact remains that Tom Horn was hanged for murder in Cheyenne on November 20, 1903. He was buried in the Columbia Cemetery in Boulder, Colorado.