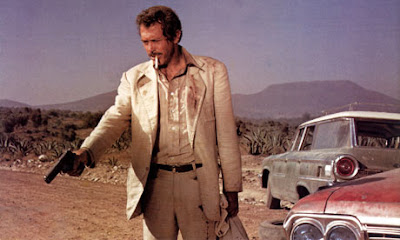 It is a Western. Trust me.

It looks like a Western at the start alright, as gunmen in Stetsons with tied-down holsters, or on horses, with Winchesters, ride about a ranch. Many of the characters are Western men: Warren Oates and Emilio Fernandez from The Wild Bunch, Kris Kristofferson from Pat Garrett & Billy the Kid. There’s plenty of shooting and there’s a Western feel or tone to the movie. But very soon, 60s automobiles burst out of the ranch gate, we ride an Aero Mexico jet and the Western mirage dissipates.
We are in late 60s Mexico and it’s a chase plot. Only the pursued is dead and the pursuer becomes the hunted.

Whether it is or isn’t a Western, it’s pure Peckinpah, that’s for sure. It came after Junior Bonner and The Getaway, both quite Western in style anyway (maybe I should review The Getaway), and the year after Pat Garrett. Peckinpah contributed to the story and the screenplay. Like most of his movies after The Deadly Companions, it was very much ‘his’.
.
. 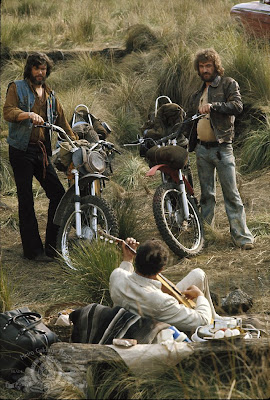 Biker trash. You couldn’t get trashier.

It’s famously grisly as Bennie (Warren Oates) drives round Mexico, a little more than half drunk, a little less than half mad, digs up the corpse of A. Garcia to behead it and is interred himself. A whole family is machine-gunned, including the old granny. Q. Tarantino definitely saw this film. It’s a bloody art-trash epic that Tarantino et al have taken to their bosoms.
Oates is superb. He is just so beat up, so crumpled, so unshaven, an alcoholic bar tender who plays a little piano and gets in over his head – yet survives into the last reel against all the odds despite professional killers and bullets flying every which way.
.
. 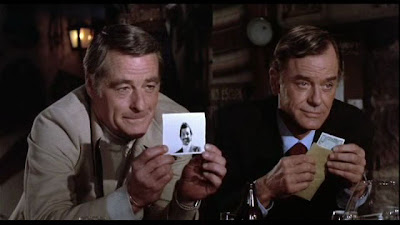 Elita (Isela Vega) is lovely and wonderfully sympathetic. The two gay killers (Gig Young and Robert Webber, a seriously odd couple) are slick. They must be a homage to Fante and Mingo (Lee Van Cleef and Earl Holliman) in that greatest of all gangster-noir B-pictures, Joseph H Lewis’s The Big Combo. Gig Young says his name is Fred C Dobbs, a reference of course to another ‘Western’ (or not) set in Mexico, The Treasure of the Sierra Madre, and come to think of it there’s something Dobbsish about Bennie.

The rapist biker trash (Kristofferson) is really nasty. Probably the star, though, is the car, like Junior Bonner’s, this time though a very long and very rusty red Ford convertible, 736 AKH, which belches white smoke. I’m sure that’s why Sam didn’t go the whole hog and make the movie a proper 19th century Western, so he could use that car. 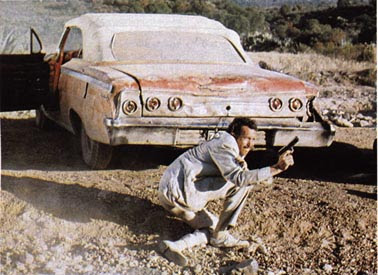 The car, the star

.
Well, I’m not sure really.
It’s a seriously weird buddy/road movie where the roads are the Mexican dirt tracks and the buddies are Bennie and the rotting head. Now that’s weird. Bennie and “Al” (as he calls the head) do some male bonding as, through a haze of tequila fumes, the two losers, both lovers of Elita, unite against the filthy-rich power men. Bennie follows the Western code, you see. At the end of his odyssey he is drunk, dog-tired and in deep despair but a man’s still gotta do what a man’s gotta do. I don’t think Alfredo Garcia is autobiographical (at least I don’t think Sam drove Mexico with a severed head in a burlap sack) but there are sure similarities between Peckinpah and his ‘hero’. And you have to say it’s a Western.
Oates wears his sunglasses even in bed. They were Peckinpah’s. Sam even wore them in darkened hotel rooms.

The late Roger Ebert, usually a perceptive commentator (i.e. when I agree with him), says that Peckinpah’s ”characters don’t look for [violence], they don’t like it, and they negotiate it with weariness and resignation. They’re too beat up by life to get any kind of exhilaration from a fight. They’ve been in far too many fights already, and lost most of them, and the violence they encounter is just another cross to bear.” That’s right, indeed. 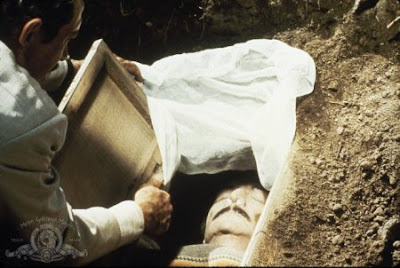 Europe? The French adored it, of course. Brits will know that the film title was a very long-running joke on the radio panel game I’m Sorry, I Haven’t A Clue. The film was banned in Sweden. I ask you.

In the US it featured, incredibly, in The Fifty Worst Films of All Time. Good heavens, what? Idiots. Morons.

It’s a must-see for anyone even vaguely interested in Peckinpah and probably everyone else too.

Ebert again: “A real director is at his best when he works with material that reflects his own life patterns. At a film festival, after Pat Garrett had become the latest of his films to be emasculated by a studio, he was asked if he would ever make a ”pure Peckinpah” and he replied, ”I did Alfredo Garcia and I did it exactly the way I wanted to. Good or bad, like it or not, that was my film.”