A great work of art cut to ribbons?

After The Big Country, released in 1958, Charlton Heston rather avoided Western scripts. He was Andrew Jackson (again) in The Buccaneer, but you couldn’t really call that an oater. He preferred the grandly epic, being Ben-Hur and El Cid, or went back to the biblical, being John the Baptist in The Greatest Story Ever Told. But in the second half of the 60s, not, admittedly, the high water mark of the Western genre, he returned to the saddle – for Sam Peckinpah. He may have regretted it. Shooting was very hard for Heston. Peckinpah was so obnoxious and abusive towards his actors that Heston actually threatened the director with a saber. Heston later remarked that this was the only time he had ever threatened anybody on a movie set. Heston alleged that towards the end of the shoot Peckinpah simply became drunk and wandered off the set, and that he (Heston) had to finish directing many portions of the movie himself. Finally, the film was slammed by critics and performed poorly at the box office.

Major Dundee was Sam Peckinpah’s first big-budget Western. Ride the High Country and, especially, The Deadly Companions had been relatively modest affairs. In Major Dundee Sam could spread himself for the first time, and he sure did. It is said that Peckinpah was given a $4.5m budget which was reduced to $3m after a change in Columbia execs at the top but he spent $4.5m anyway.

It didn’t necessarily mean it was a better movie. The director/writer chose remote locations, abused and fired crew like there was no tomorrow and drank heavily. When martinet Dundee (Heston) becomes obsessed with his foray into Mexico, sinks into alcoholic depression and drags his exhausted men after him at whatever cost, you wonder if this wasn’t Sam himself we are talking about.

Peckinpah had been pitching a movie about Custer and Little Big Horn, because he thought it was fascinating how Custer became an immortal American hero after being defeated in battle and killed. Nothing ever came of that, though a Custerish project called The Glory Guys, which Peckinpah was slated to write and direct, was pulled and given to Arnold Laven, and released four months after Dundee.

Peckinpah thought the story of Major Dundee to be similar enough and decided on this tale, which he found in 1963, instead. The early draft, by Have Gun – Will Travel writer who would later create Dirty Harry Harry, Julian Fink, which was apparently full of four-letter words which would never have got past Columbia, focused on Trooper Ryan, and was a fairly straight adventure story. Peckinpah decided to make the movie into a complex character study about Dundee as a glory-hungry officer, who would do anything to gain fame and recognition.

Michael Atkinson in The Village Voice sees in this mid-1960s picture a Vietnam parable: “Major Dundee is virtually without rival as a reflection of U.S. involvement in Southeast Asia, because it simultaneously gloats on irresponsible bloodshed, abhors military slaughter, and couldn’t give a good goddamn about life or death.” This is easy to say about any film with violence in it from that period and I don’t think it’s quite as obvious as that. Yes, Major Dundee is nihilistic and violent but that was whiskey-sodden Sam for you.

Major Dundee’s failure delivered a hammer blow to Peckinpah’s reputation. He lost The Cincinnati Kid to Norman Jewison and didn’t direct another Western till The Wild Bunch. Whether that was because Major Dundee was an artistic mess, the fault of a drunken and over-reaching director and writer, or whether it was because Columbia, furious, savaged it with cuts, as Peckinpah and his supporters claimed, is debatable.

James Coburn and RG Armstrong, in the making-of part of the DVD, slam the studio for the cuts, and many others have said the same. Sam himself claimed that the uncut version was one of the best things he did. I’ve seen the 2005 version, supposedly authentic, and as a viewer I’m not so sure. In the uncut version the film tends to be slow and is very long (2 hours 10 minutes). There are scenes which you feel could and probably should have been excised. Less is more, as when an editor forces you to cut 200 words from an article you have written and you think you are forced to sacrifice all the good bits: actually, it becomes a better article.

Sam Peckinpah was certainly one of the genre’s greatest creators but Major Dundee was far from being his finest work.

It’s the story of a late Civil War Union expedition into Mexico to pursue Apaches in which Major Amos Dundee is forced to use Confederate prisoners under Lt Benjamin Tyreen (Richard Harris). The conflict between the two alpha males (very realistic because apparently Harris was always trying to upstage and outdo Heston) is exacerbated by their both falling for Austrian Santa Berger who happens to be in a poor Mexican village. “He is corrupt,” says Dundee to Berger of Tyreen, “but I will save him.” Tyreen is and Dundee does, of course.

It has been suggested that there was no romance in the original story but Columbia insisted on one. The New York Times review said “The intrusion of an alien love interest plays havoc with the realistic context” and it does in fact jar.

Many (including RG Armstrong) have seen parallels with Moby Dick, with Dundee as Captain Ahab, Tyreen as Starbuck, Ryan as Ishmael, and so on. OK, maybe. Your (lower brow) Jeff noticed rather more parallels with Escape from Fort Bravo (1953) when Captain William Holden was forced to fight with Rebs against Indians. Or, now that I think about it, Two Flags West (1950), with a similar plot.

They fight French lancers as well as Apaches so there’s no shortage of action. Coburn says that nowadays they have action films but this was a film with action.

As for the principals, I don’t think (though I know many would disagree) that Harris was ever any good in Westerns except perhaps as English Bob in Unforgiven and it was a pity Anthony Quinn didn’t take the role as planned.

And Heston poses and preens quite a bit, although he does Tough quite well. Once again he comes over as bitter and sour. Heston and Harris did not get on, at all. Heston was the drunk in the story but Harris was the drinker on location (James Coburn recalled, “When he wanted to, he could hit the liquor like no one I knew” and Coburn was no slouch at drinking) and Harris was often late on set. And he didn’t care for Heston’s disapproval of his lateness: “He used to sit there in the mornings and clock us with a stopwatch like some dreary great headmistress in enormous gangling drawers.” Harris described Heston as “being so square that he must have fallen from a cubic moon.”

However, the support acting is outstandingly good: RG Armstrong is fine (he always was) as a preacher good with a shotgun. Ben Johnson, LQ Jones and Warren Oates (fast becoming Peckinpah stock company regulars) are, as usual, splendid as cavalrymen (and adding a Fordian touch to the whole, even if they are Confederates). Slim Pickens. Dub Taylor. 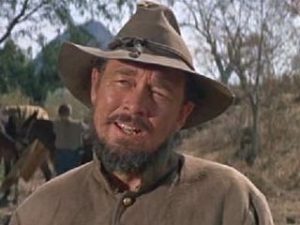 And, especially, James Coburn (replacing first-choice Lee Marvin) is great as the grizzled one-armed scout Samuel Potts. I think he was the best actor on the set.

Jim Hutton also did a solid job with the part of the by-the-book Lt Graham who learns soldiering and so did Michael Anderson Jr (a good actor) who was winning as the young Trooper Ryan who narrates the story. 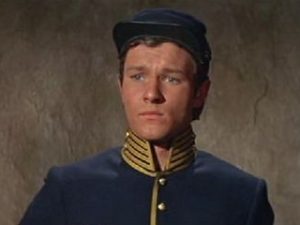 Pickens has a sadly small but strong part as a drunken horse stealer and Michael Pate is Sierra Chariba. Pate seemed to have cornered the market in Indian chiefs, rather oddly for an Australian. Author of the book Peckinpah: A Portrait In Montage Garner Simmons says that the character of Sierra Charriba was  loosely based on the real-life Apache warrior chief Vittorio – whom Pate had played in Hondo in 1953.

So, classy acting and a veritable roll-call of fine Western character actors.

And the extras! It’s cast of thousands. He took two weeks to shoot just the Apache ambush at the river and the biggest army of stuntmen ever then assembled.

Sam Leavitt (Peckinpah had wanted Lucien Ballard) did wide-screen color photography of the Durango locations and the restored print shows the quality well. I think there is some lovely light and long shadow. But not everyone liked it. Variety said, “Even in this new [2005] print, Major Dundee isn’t a very good-looking film; Sam Leavitt’s cinematography is often plain and the day-for-night battle scenes are so murky, it’s hard to tell what’s going on.”

Much of the music, by Daniele Amfitheatrof and Christopher Caliendo in the 2005 version, is original and striking. Peckinpah didn’t like the first score and tried to get it changed.

There are, um, whatever the opposite of echoes is in the movie, which prefigure The Wild Bunch five or so years later, such as the sad farewell with the band playing as the soldiers leave the village.

Heston wrote in his autobiography that he, Peckinpah and Columbia all had different ideas on what the film should be: “Columbia, reasonably enough, wanted a cavalry and Indians film, as much like [John Ford’s] best as possible. I wanted to be the first to make a film that really explored the Civil War. Sam, though he never said anything like this, really wanted to make The Wild Bunch. That’s the movie that was steaming in his psyche.”

Eugene Archer in The New York Times criticized the “choppy continuity that finally negates its impact” and said that the “choppy editing abruptly disposes of whole characters, leaving several plot lines dangling. By provoking more curiosity than it satisfies, Major Dundee ends as a big, lopsided melodrama, pleasant to watch but hardly a challenge to the eminence of the great Western folk director, John Ford.” But these were criticisms of post-shoot editing and cuts, not of Peckinpah himself. “Action abounds, and the pace is lively. The outdoor vistas are better than the intimate scenes, which are frequently marred by clumsy background processes, but Mr. Peckinpah does have an eye. He has a lot to learn, but his education should be worth paying for.”

Variety called it “an important but admittedly second-tier picture” and said, “the film is inherently a deeply flawed work that was far from fully realized in both script and shooting” and that is probably right.

David Weddle, author of If They Move … Kill ‘Em! The Life and Times of Sam Peckinpah, argues that Peckinpah is just as much to blame for the final product as Columbia.

Most of the reviews available today came at the 2005 release and are laudatory. For example, in the Alt Film Guide, Dan Schneider called Major Dundee “a near-great film” and “likely the most gritty and realistic Western ever made.” Reviews of the 1965 release, then or later, however, were not so positive.

Brian Garfield (1982) called it “a tough, jerky, confused melodrama” and said that “it’s a structure of clichés and one finds it very hard to swallow the claims of auteuriste apologists who claim that if Columbia had only left it alone, uncut, it might have been a masterpiece.”

The première was disastrous, and prompted 13 minutes’ more cuts. It got nowhere at the box-office on release, being blown out of the water, as far as Westerns go, by the likes of Cat Ballou, Shenandoah and The Sons of Katie Elder, all mainstream, commercial and not very challenging pictures.

Yes, there are clichés and yes, the lead characters are a bit one-dimensional. Coburn says that Peckinpah was a genius for three hours a day.

But all in all it’s a good film and a must-see in either version – or both. Myself, however, I don’t think it’s a great work of art cut to ribbons.