.
.
Glenn Ford in the 1960s
.
.
Glenn Ford got back together with George Marshall in 1964 for the fourth time (they had already done Texas in 1941 and The Sheepman in 1958, and Marshall had also directed, uncredited, some of Lust for Gold in 1949) in a slight, light, entertaining comedy Western based on Company of Cowards by Jack Schaefer, of Shane fame. In fact the movie was called Comapny of Cowards in some markets. 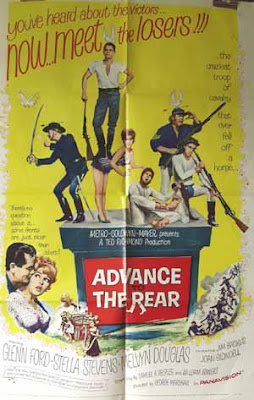 Ford had played some pretty driven, even manic Western characters, such as in Lust for Gold or The Man from Colorado but he was getting in the swing of the lighter end of the spectrum too. I think I may have mixed my metaphors there but what the hell, I’m devil-may-care. The Sheepman and The Rounders showed that Ford had the lightest of touches without any disrespect for the genre (some comedy Westerns didn’t bring this off).
.
. 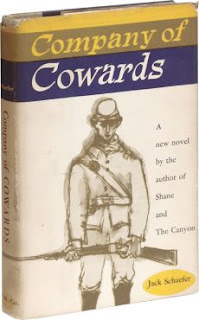 The movie did not really have a stellar line-up. Stella Stevens was the female lead, in her first feature-film Western (she had done TV stuff). She was to be rather good in her next one in 1970, as Hildy the whore in The Ballad of Cable Hogue. Here she is a Confederate spy who falls for Union Captain Glenn. Apparently Ford specifically requested her for her role as they had hot off the year before on The Courtship of Eddie’s Father. She was under contract to Paramount at the time and loaned out to MGM.

Melvyn Douglas is the knuckle-headed philandering colonel. He had done a few Westerns (he was in the ponderous Elia Kazan-directed Tracy/Hepburn picture The Sea of Grass but nothing much else). Jim Backus is the mutton-chopped general, Joan Blondell a lady of, ahem, easy virtue, these are not exactly a Western hall of fame. 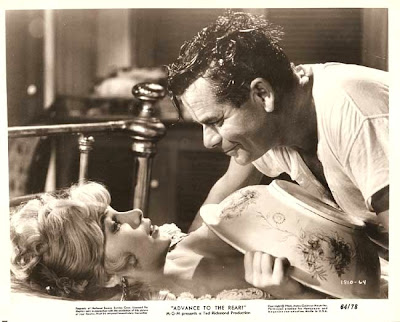 Still, there was Glenn. And Michael Pate (as an Indian, of course) and a young (and uncredited) Britt Ekland.
It’s all harmless fun. In the company there’s a kleptomaniac, a pyromaniac and a man with permanent hiccups. They spend time running round the frontier in their longjohns. It tends to the slapstick end of comedy which may not be your bag but it’s fun really. It’s what people in the 60s who had been brought up in the 40s thought was funny. No one would pretend that it’s a key work in the Glenn Ford oeuvre – or in Marshall’s come to that. But it’s worth at least one viewing.
.
.
It is said that Alan Hale Jr got his role as The Skipper on Gilligan’s Island because of this movie, having been spotted by Sherwood Schwartz at a restaurant in his Civil War uniform.