.
.
The Civil War again
.
.
Another Glenn Ford Civil War picture, A Time for Killing, aka The Long Ride Home, could not have been more different than Advance to the Rear, which was a light comedy. It’s more like The Man from Colorado in the sense that it’s a end-of-the-Civil-War story. The plot, at the start, is reminsicent of Escape from Fort Bravo, only it’s Escape from Fort Hawkes: Confederate prisoners led by Captain Bentley (George Hamilton) escape from Ft Hawkes, Utah. Bentley, swearing that the war will never end for him, ambushes some Union soldiers and captures the attractive Emily Biddle (Inger Stevens), a missionary engaged to the fort’s second-in-command, Major Tom Wolcott (Ford).
.
. 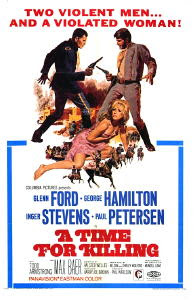 The obstinate Colonel Harries (Emile Meyer from Shane) orders the reluctant Wolcott to take a detail and go after the Rebs, despite Wolcott’s reasoning with his commander that the war is almost over and even if the Rebs are caught they’ll soon be released. The Rebels hole up in a bordello near the Mexican border. Bentley has his sadist sergeant, Luther Liskell (Max Baer), kill the Union dispatch rider carrying the news that the war is over. Walcott then has to cross illegally into Mexico to rescue the missionary girl from the clutches of the evil Bentley.
.
. 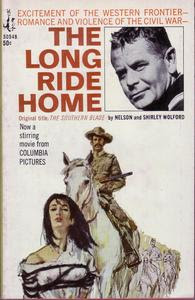 The movie was based on the 1961 novel The Southern Blade by Colby Wolford and Harley Duncan and was written by Halsted Welles. The film is quite violent and ‘modern’ in a late 60s way. It has some Peckinpah-esque moments and there are echoes of Major Dundee of two years before as the pursuit into Mexico progresses. It’s as if war has corrupted the men and the power of life and death they have wielded has rotted them inside. The decent, brave major role was tailor-made for Ford but even he is not that spotless and the other characters are all fairly detestable. George Hamilton and Harry Dean Stanton (as the sergeant) are more 1970s Western characters than Ford could be.
Top-billed Inger Stevens went on to do Firecreek, Hang ’em High and 5 Card Stud in the space of a year and was evidently a hot property. Timothy Carey (One-Eyed Jacks, Rio Conchos) was in it as Billy Cat, Kenneth Tobey is a sergeant and a young Harrison Ford as a lieutenant makes an appearance that lasts all of a minute.
.
. 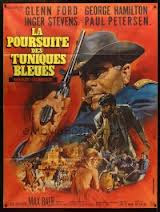 The movie was produced by Harry Joe Brown. Roger Corman (uncredited), who had done five low-budget Westerns, started the directing but was brusquely replaced by veteran director Phil Karlson after two weeks (Karlson went right back to My Pal the King, that great 1932 Tom Mix talkie, on which he had served as assistant director). A lot of the crew was also replaced. So the filming was pretty chaotic.
It’s not a great Western – it’s not a great movie at all – but it wasn’t the worst one that Glenn Ford was in either. You just get the impression that he was starting to feel a bit out of place in the revisionist Western world that was appearing. He’d turned 50. His world, the classic Western world of the 50s, was fast receding.

PrevPreviousAdvance to the Rear (MGM, 1964)
NextThe Last Challenge (MGM, 1967)Next

PrevPreviousAdvance to the Rear (MGM, 1964)
NextThe Last Challenge (MGM, 1967)Next
Jeff Arnold © 2022 – All rights reserved – Designed by BetterCallChris
Scroll Up