.
.
A Civil War movie combines with a cattle drive one
.
.
This double-billing William Holden/Richard Widmark Civil War Western was directed by Edward Dmytryk. Ukrainian/Canadian/Californian Dmytryk was a mathematics wizard who dropped out to make movies and by the 1940s was considered one of Hollywood’s rising stars but he suffered terribly from the HUAC persecution. As far as Westerns are concerned, he only did five (three of them with Widmark) but they are all quite interesting and a bit ‘different’.
.
. 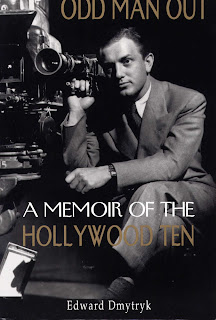 .
After the 1930s The Hawk, he directed Fox’s big-budget blockbuster Broken Lance with Spencer Tracy in 1954, then made one of Henry Fonda and Anthony Quinn’s best Westerns, Warlock in ’59. After Alvarez Kelly came the British Western Shalako, an unadmired yet I think rather good oater with Sean Connery and Brigitte Bardot.
.
. 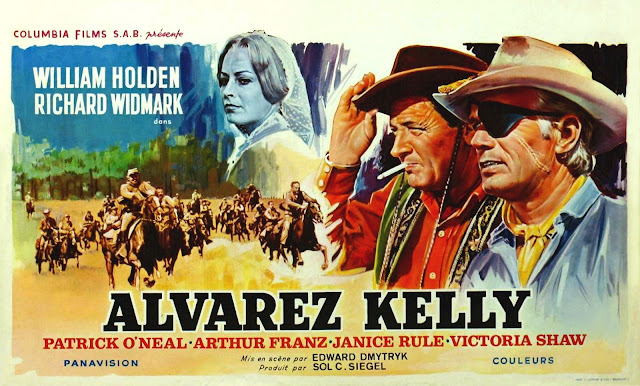 Alvarez Kelly (Holden) is a Mexican national who is neutral in the Civil War and his only loyalties appear to be “money, whiskey and women”. Holden was making rather a specialty of cynical, hard-bitten types and this role suited him perfectly. “I don’t care who wins,” he says of the Civil War. He drives cattle to the Union Army, bought at $2 a head and sold at $20.

But while Kelly and the Union major are dining at the mansion of a Southern belle (Victoria Shaw, very like Constance Towers in The Horse Soldiers), the herd is hi-jacked by Reb Colonel Rossiter – Widmark, this time with an eyepatch and a slightly dodgy Southern accent (he was Minnesota born and Illinois raised so not terribly Dixie). Now Kelly is obliged (Rossiter shoots a finger off and says he will shoot another each day till Kelly agrees; that‘s obliged) to drive the cattle to Richmond. 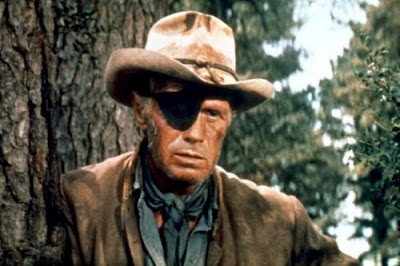 There is a complicated plot involving Widmark’s Southern woman (she rules out the definition of Southern belle) played by Janice Rule, and Kelly helping her to run the blockade and get out, out of compassion for her but mainly to get his own back on Widmark for the finger.
The writing isn’t that good. Once, Holden, who was hung-over and whose horse was playing up, became angry and tried shoving the script up the horse’s rear end, shouting, “That’s where it belongs!” But there’s a lot of action as a Civil War movie combines with a cattle drive one.
.
. 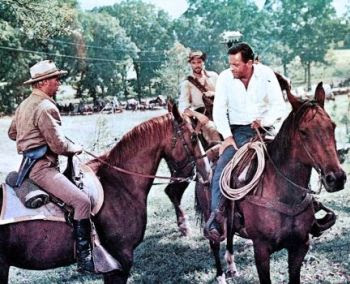 Like The Horse Soldiers, the story was loosely based on a true action, this time the so-called “Beefsteak Raid” of September 14-16, 1864.
The two lead performances are good, especially Holden. Widmark’s OK though he’s supposed to be battle weary and it comes across as sour and even bored. For the rest, I didn’t know most of the actors, although Harry Carey Jr has a small part, luckily. The Union major is Patrick O’Neal, whom I only remember from King Rat. Don ‘Red’ Barry is a lieutenant.
.
. 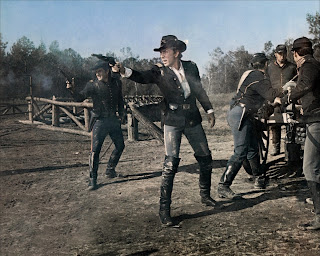 There’s nice widescreen photography of the Louisiana locations by Joe MacDonald. The music (Johnny Green) is OK. The whole movie is quite large-scale.
But it’s a second-rank piece really, an example of the 60s Western not really knowing where to go. It’s not a (Widmark’s) patch on Broken Lance or Warlock, and from Holden’s point of view it was one of his lesser Westerns. Still he was very good in it (he always was) and it does carry you along quite well.
.
PrevPreviousStreets of Laredo (Paramount, 1949)
NextThe Revengers (NGP, 1972)Next