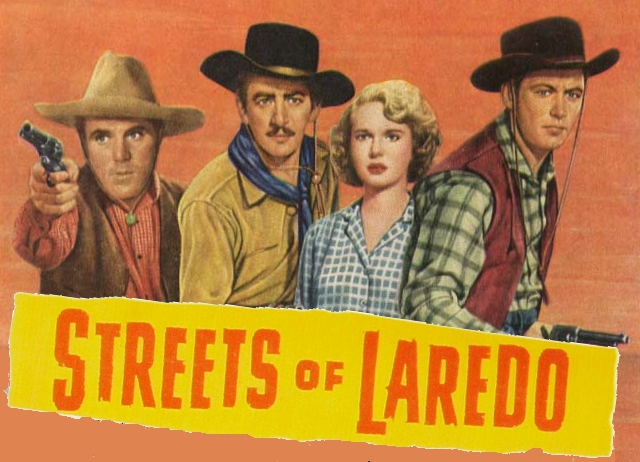 Paramount had made a successful black & white Western in 1936 about The Texas Rangers (click the link to read our review) with Fred MacMurray, Jack Oakie and Lloyd Nolan. It’s quite enjoyable. In the late 40s they decided to remake it in color. Remakes aren’t always as good as the originals and rarely better, but this one is.

The main difference is in the acting. William Holden (this was his fifth Western of eleven) was always fine in cowboy films. Here, he is not too noticeable at the start but during the picture he grows into a true Western hero. The scene in the saloon towards the end is superb. Gary Cooper was considered for the ’36 picture, and would have been splendid, obviously, even if MacMurray did a good job, but in this version there could be no higher praise than to say that Holden plays the part as well as Coop would have done. He is decent, taciturn and steely.

Although released in 1949, this film was shot in ’48, so Holden was in the saddle a lot that year – he had also done The Man from Colorado and Rachel and the Stranger.

Another improvement of this remake over the ’36 version is in the writing. The Texas Rangers had been written by director King Vidor and his wife Elizabeth Hill (with other contributions) but this one was penned by Charles Marquis Warren. Godson of Scott Fitzgerald, Warren was a Western screenwriter, a novelist (Only the Valiant, Valley of the Shadow) and a producer too and he really knew his stuff. He’d be nominated by the Writers Guild in 1951 for Little Big Horn. Later he was director and producer of the first series of Gunsmoke. The script of Streets of Laredo is tight, taut and sometimes witty (at one point William Bendix, thinking Holden’s plan crazy, asks him, “Are we out of your mind?”)
.
. 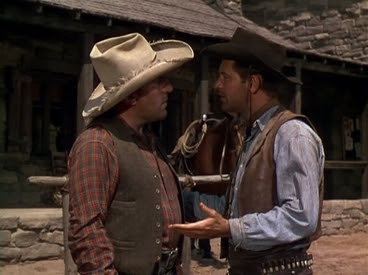 Bendix as Wahoo not too good

Actually, Bendix, in the Oakie (and Okie) role as Wahoo, isn’t very good and is one of the weaknesses of the film. He was not a convincing Westerner and should probably have stuck to gangster and war films. However, Macdonald Carey is unusually strong as Lorn Reming, the replacement of 1930s ‘Polka Dot’ (Lloyd Nolan), the smiling bandit. Carey was probably best known as Dr Tom Horton of NBC’s Days of our Lives but he was in fourteen feature and TV Westerns, this being his first.  Here he is a dashing desperado with caddish mustache. I can’t help thinking, though, that the part needed Anthony Quinn.
.
. 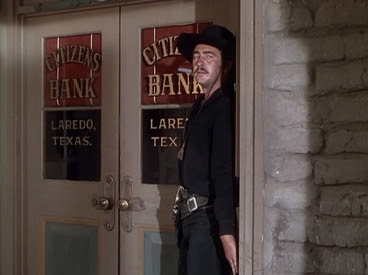 Let me put in a good word too for Alfonso Bedoya (the toothily smiling villain Gold Hat in The Treasure of the Sierra Madre) who in this film plays, well, a toothily smiling villain.
In the first version, the Three Amigos (and as they ride down the trail three abreast, I can’t help thinking of that movie) save an orphan boy from an attacked farm and the lad accompanies them and pluckily saves the day. There is, later in that film, a girl (Jean Parker) for Fred MacMurray to fall for. In this picture, however, these two parts have been economically combined into Mona Freeman (later to do Branded and Dragoon Wells Massacre), who starts as a tomboy rescued from the farm and then matures into a glamorous looker in 40s hairdo and bright lipstick. Plot-wise, most of the rest of the film is a straight remake. The shoot-out comes in the streets of Laredo, though, not somewhere up in the rocks as before, perhaps so that we can listen to the melancholic strains of that beautiful tune and justify the title.
.
. 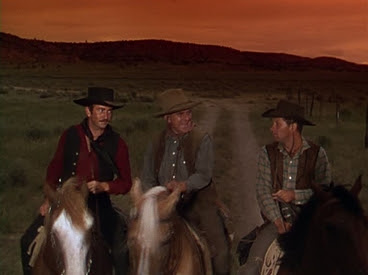 The movie is interesting because it changes and develops. It starts jokey and light, with the emphasis on the humor. We might almost be in comedy Western territory. But it becomes increasingly serious with each reel, and darker. Holden joins the Rangers as a light-hearted scheme to break his outlaw pal out of jail but comes to love the work and turn to the side of Right. The important theme of friendship versus duty takes the foreground. Parallel with this process, Holden becomes stronger and stronger as the movie goes on. He was far better at the Westerner with grit in a hard situation than in what he called “Smiling Jack” parts.
The Victor Young music is very good and reflects this change. Fortunately, in the first part Young avoids the irritatingly ‘comic’ music that disfigures some Westerns – almost like canned laughter, it was designed to signal to the audience that this part is funny, as if they were too dumb to know. Young’s score in the early part of the film is light and playful yet not silly or trivial. As the story becomes more serious (and violent), so the music becomes more somber. It’s well done.
It should perhaps be said that we are in the 1870s, not perhaps the most glorious period of Texas Rangers history, but there is no Leander McNelly and there are no summary executions or the like. The Rangers are an unmitigated Good Thing and stalwart bringers of law ‘n’ order.
Ray Rennahan did some very nice photography of the Gallup NM and California locations. The movie looks better than the original, not only because of the color.
The director who replaced King Vidor was not so stellar: Leslie Fenton was a workmanlike actor in many low-budget pictures who turned to directing lower-budget movies for MGM. He’d helmed Alan Ladd in Whispering Smith the previous year. That and this movie were probably his best work. He only did four Westerns.
Anyway, Streets of Laredo (not, of course, to be confused with the Larry McMurtry novel filmed with James GGarner (both reviewed, see index) is a fast, fun Western with some quality and you could do worse than buy it on DVD. If nothing else, it’s worth it for the bit where Holden, in one of the best mount-ups ever, jumps from the ground to a water trough to a fence rail to his pony and gallops off. That’s style.
.
.
Oh, I nearly forgot, Ray Teal is in it as the toothy guy’s henchman. So that justifies the purchase on its own. He comes to a typically Tealish end. Great stuff.

PrevPreviousRachel and the Stranger (RKO, 1948)
NextAlvarez Kelly (Columbia, 1966)Next
Jeff Arnold © 2022 – All rights reserved – Designed by BetterCallChris
Scroll Up