Arizona is a delightful Western. It was scheduled as a big picture about ‘Manifest Destiny’ empire-building to rival the Oscar-winning giant RKO production Cimarron of 1931, which Arizona’s director, Wesley Ruggles, had done. Columbia threw a big budget at it ($2m, a huge amount then) and built a whole town as early Tucson, which became the Old Tucson of countless move sets. But Arizona was never Cimarron. It was, rather, a pleasant, fun Western full of energy and zip.
.
.

.
It stars Jean Arthur. She had been one of the silent heroines (she had a small role in The Iron Horse) who had made a successful transition to talkies. She had become a big star in 1936 as Calamity Jane to Gary Cooper’s Wild Bill Hickok in the Cecil B DeMille The Plainsman. Arizona was, in fact, her first Western after The Plainsman. She’s great: lively, energetic, dynamic, and it’s very good to see a woman lead a Western as a strong, independent protagonist, on her own terms.
.
. 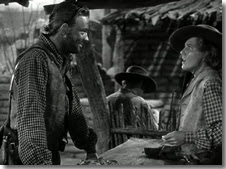 .
Second billing was William Holden in his first Western. He had just joined Columbia (along with his pal Glenn Ford) on contract. Columbia boss Harry Cohn didn’t really ‘do’ contract players but Holden was one of his first signings. Holden was superb. I have always thought him one of the best Western leads: handsome, gritty, witty, he was the right stuff. He went on to make some outstandingly good Westerns. Click here for our essay on him.

Here, he is almost a juvenile lead, tall and big-built but gauche, innocent, guileless. He is really good.
.
.

.
We are in the brand new town of Tucson, 1861, the Star-Spangled Banner bravely flying over the chaotic adobe Territorial township. Peter Muncie (Holden) arrives with a wagon train and crosses the path of pants-wearing, no-nonsense pie-baker Phoebe Titus (Arthur). She is intensely ambitious and goes into business freighting in needed goods for the growing community. She wants Pete as a partner but his feet are itchy and he aways to California.
The middle part of the movie is played without Holden as the Army abandons Arizona in order to fight the Civil War and slimy infiltrated Confederate villain Jefferson Carteret (Warren William, not a Western actor but rather dashing in his frock coat) fills the vacuum, scheming to ruin Phoebe and bring Arizona into the Confederacy. His sidekick is the dumb saloon/store owner Lazarus Ward (Porter Hall – The Plainsman, Dark Command) and together they indulge in, sorry but there’s no other word, skullduggery.
.
. 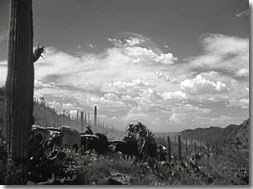 .
But of course Pete returns and there is a splendid final action-filled climax. Indians, stampede, gunplay, it all happens. I don’t think it would constitute a spoiler to let you know that the good guys win out in the end.
Still, I kinda think it wouldn’t last. I reckon that after a few years and a couple of kids, he would be off again. His feet were too itchy and she was too ambitious. No, it couldn’t last. Columbia should have made a sequel in about 1947. A noirish Western with Holden, growed and a bit bitter, in Wyoming or Montana (it could have been called Montana, Warners didn’t grab that name till 1950 for Errol Flynn), ramrodding an outfit and getting into a range war, and Arthur is now a ruthless Ramrod/Man without a Star/The Violent Men-type cattle baroness who owns half Arizona and will stop at nothing. Then they meet again and …
Sorry, I’m rambling.
.
. 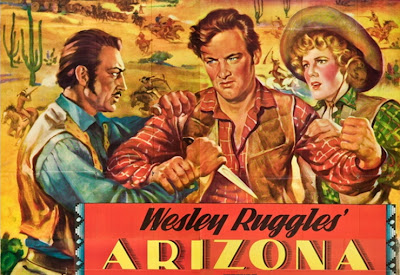 .
Arizona is graced by the presence of Edgar Buchanan, great pal of Glenn Ford and Bill Holden, totally excellent as Bogardus, a disreputable drunken judge who sobers up. It was only his second Western after the unforgettable intro/outro appearance as the wheelwright in When the Daltons Rode. Here is an example of his part:
Bogardus: Now, the prisoner at the bar, the charge against you is that you up and blowed the head plumb off of Gus Modesko. In consequence of which said shooting said Gus is deader than blazes. Are you guilty or not guilty?
Joe Briggs: Well, Judge, I don’t reckon I could say not guilty when everybody seen me do it.
Bogardus: Now what in tunket made you act like that, Joe?
Joe Briggs: Drinking. Just drinking.
Bogardus: Well the verdict of this here tribunal is that Joe Briggs is fined five dollars for disturbing the peace. The court is hereby adjourned to Lazarus Ward’s Bar where said fine will duly be disposed of.
Am I rambling again? No, I don’t think so.
There is exciting Victor Young music and nice black & white photography (I have no idea who did it).
I like the frumpy women in dowdy dresses and big bonnets and the men in lumpy coats and no guns. Pigs in beat-up wagons. Two children pull a plow for their father because there are no mules. It’s actually quite realistic for a 1940s Western. Nice AZ scenery and saguaros.
An excellent watch. Go for it. 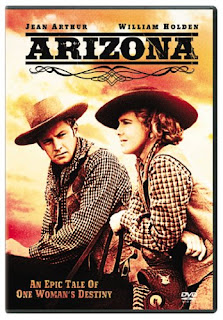 PrevPreviousHigh Noon, Part II: The Return of Will Kane (CBS TV, 1980)
NextRachel and the Stranger (RKO, 1948)Next

PrevPreviousHigh Noon, Part II: The Return of Will Kane (CBS TV, 1980)
NextRachel and the Stranger (RKO, 1948)Next
Jeff Arnold © 2022 – All rights reserved – Designed by BetterCallChris
Scroll Up