The Return of Will Kane
.

You often wonder, don’t you, what happened to the town after the Western ends? I do. I want to go back to that town in Open Range and see if Robert Duvall is running the saloon with dancing girls. Kevin Costner has probably become marshal. They shouted “We’ll be back!” in the closing scenes of Silverado. Well, did the boys ever get back together?  And did Will Kane ever return to Hadleyville and if so, how was he received?

In 1966, the year of remakes of Stagecoach and The Plainsman, there had been an attempt to resuscitate (or cash in on?) the great Western movie High Noon in a Four Star TV pilot called, rather cornily, The Clock Strikes Noon Again, which starred Peter Fonda as the son of Will Kane and in which Katy Jurado reprised her role of Helen Ramírez. The planned series didn’t happen.
.
.
In 2000 Tom Skerritt would star in a made-for-TV remake, High Noon.

.
.
But in 1980, CBS came out with a made-for-TV ‘sequel’ to High Noon, called, no, not High One O’Clock but High Noon II: The Return of Will Kane.
In reality, it was hardly a sequel. The Elmore Leonard story is completely different (it’s a reasonably good chase plot) and all the middle part of the film is set out of town. The only similarity is that certain of the characters bear the same names as the ones in Hadleyville in 1952. None of the original actors re-appears (fair enough) although a few do make the effort to resemble the originals, such as Warren Stanhope as the unpleasant hotel desk clerk, doing a Howland Chamberlain impression.
.
. 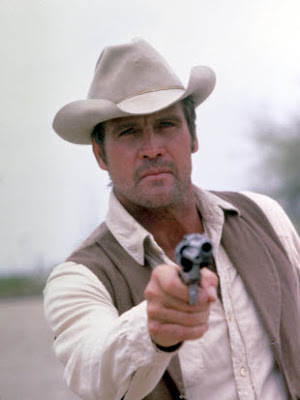 Briefly, one year after the conflict with Frank Miller, Will Kane (Lee Majors, solid but poor man, what an act to follow) returns to town with Amy, his Quaker wife (Katherine Cannon, pretty but trying to be a little more gutsy than Grace Kelly – maybe Mrs Kane had learned something), to buy a stallion and some brood mares. There, wanted outlaw Ben Irons (David Carradine, excellent as always) steals some of his horses and evil Marshal JD Ward, Kane’s successor (Pernell Roberts in gray beard and a pound or two de trop, very good though, more like his Sam Boone in Ride Lonesome than his Adam in Bonanza) shoots the rest of the animals while trying to capture Irons. While Marshal Ward sets out with his murderous posse, numbering, of course, the mystical Western number of 7, Kane rides out alone to capture Irons and bring him to court to recover the money he paid for the horses. So we have an outlaw being chased by two parties.
.
. 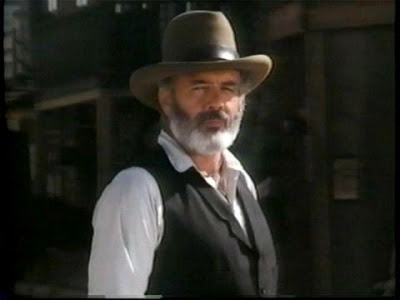 Pernell Roberts: the marshal is the badman while the outlaw is the goody

Gradually, as we may guess fairly early on, Kane bonds with Irons (who is of course innocent) while Ward and his band of thugs are little more than bounty hunters who haven’t read the “…or alive” bit on the wanted posters.
All in all, it’s quite good. The acting is always sound and in the case of Roberts and Carradine excellent. Majors does try for a little Coop-like diction, clipped and tough. I also liked JA Preston as Alonzo, the Negro-Apache deputy who has to swallow insult after insult from the racist marshal (who always calls him Boy) until finally…
His other deputies are all rascally (no sign of Harvey Pell; perhaps he went off chasing Helen Ramirez, who knows).
.
. 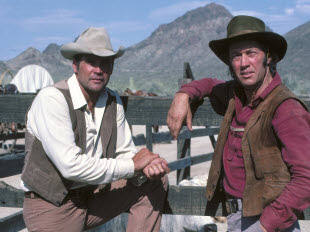 Will Kane with Ben Irons

The marshal has a long, shiny .44 Henry rifle while Kane has a Sharps. You kind of hope for a rifle duel but it doesn’t happen. As is only proper, it finally comes down to pistols in the town street in the quick-draw showdown so beloved of the dime novel and Western movie.
Of course, it’s a TV show, not a feature film, so we get the periodic mini-climaxes in the action and fades to black for the commercial breaks, but that’s OK. There’s a train – well, there had to be. There’s no reference to noon and nothing happens at twelve o’clock. It certainly does not pan out in real time. The new Judge (Otto Kruger lit out, of course) wires for authority to the “State capital” (odd, as New Mexico wasn’t to become a state for more than twenty years) and Kane pins the famous tin star back on.
.
. 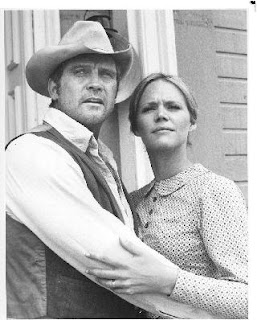 But it doesn’t get thrown in the dirt this time. The townsmen are still pusillanimous but they have a little more guts than in ’52. Mayor Henderson must have died and there’s no preacher around to prevaricate feebly.
Tragically, there’s no Jack Elam as town drunk either. Marshall Ward wouldn’t stand for drunks and send them in a kindly fashion on home, as Will did. He’d probably shoot them.
.
. 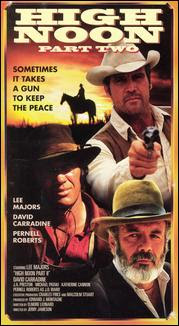 It’s nicely photographed at Old Tucson and in the Saguaro National Park or Tucson Mountain Park, around there anyway. The (uncredited) orchestral music hints at Do Not Forsake Me but stops short of it – maybe something to do with rights or maybe for more artistic reasons, who knows. The movie is directed by Jerry Jameson, who did a few TV Westerns. There are rather too many screen-binocular shots and distant riders in the desert. The shoot-outs are perfunctory. Still, satis.
Of course, it’s not a patch on High Noon. Well, you wouldn’t expect it to be. But it’s not at all bad and as a straight wet-afternoon Western with good actors and writing, it would well repay a watch.
I don’t think Will Kane will be back in Hadleyville any time soon, though. Hadleyville will probably be relieved.
.
PrevPreviousFort Dobbs (Warner Bros, 1958)
NextArizona (Columbia, 1940)Next