Despite the fact that Michael Curtiz directed it, The Proud Rebel is actually a rather subtle and successful Western. You may wonder at that ‘despite’ and I would understand that: after all, Curtiz directed Casablanca, the best movie of all time, didn’t he? But Westernwise, in my view, he hadn’t quite got it; he is best known for directing the Errol Flynn/Olivia de Havilland combo in Dodge City and Santa Fe Trail and he also did Virginia City with Flynn. I like these Westerns. They are quite fun. But they are essentially lightweight and not really understanding of the genre. Curtiz was very far from the best Western director. 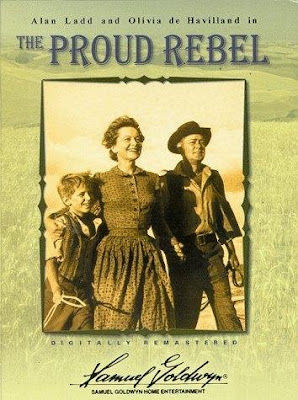 Perhaps he did The Proud Rebel because de Havilland was in it. Whatever the reason, it turned out to be one of Alan Ladd’s best Western efforts. This is largely because it is not an action Western at all. Ladd wasn’t good at those. It is a quiet, rather tender story about a man and his eleven-year-old boy (David Ladd, Alan’s son) who has been rendered mute by a wartime trauma, and the father’s efforts to find a surgeon who can make the lad speak again. Father and son meet a kind rancher woman and they form a family unit, with Lance the faithful dog making up the foursome. It was perfect for Ladd, just the kind of thing he was good at. It was Shane without the gunfighter.
It was photographed by Ted McCord near Cedar City, Utah and has a very pastoral, not to say bucolic look about it. This atmosphere is enhanced by the Jerome Moross score. Once Ladd and the boy get out of town (a town full of corruption and violence) and onto the ranch, there is a healthy and comfortable peacefulness in the air. De Havilland and Ladd manage the gradually growing mutual respect, then affection, very well indeed.
.
. 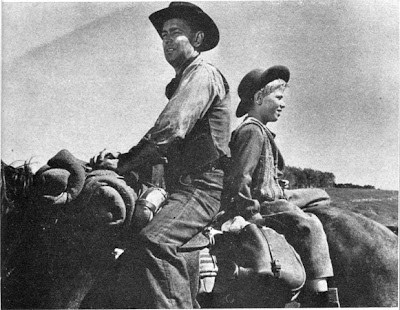 Some of the support acting is excellent. Dean Jagger, always excellent, is Burleigh, a sheepman who wants de H’s ranch to expand his flocks (there is a rancher/sheepman conflict in the plot, a well-known Western trope) and his rascally sons are Harry Dean Stanton and TV-Western actor Tom Pittman. I liked Cecil Kellaway as the Quaker thee-and-thou-ing doctor who helps the child (though as usual in Westerns, the script never quite gets that right and there are only thees and no thous). John Carradine and Henry Hull have re-emerged magisterially from Jesse James, the former as a traveling salesman and the latter as a cranky but kindly judge. And King plays Lance.
There’s a brief passing reference to Shane as Ladd has a go at a stump. He still looks fit here (only two years later he looked far from well) and carries off vigorous farm tasks convincingly. He spruces the ranch up no end.
.
. 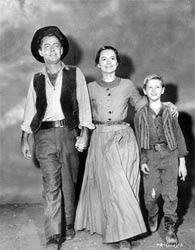 David, the boy, is very good. It is hard to judge child actors and, rather unkindly probably, I am always put in mind of Dr Johnson’s dictum, which, adapted, might run: “Sir, a child’s acting is like a dog’s walking on his hind legs. It is not done well; but you are surprised to find it done at all.” But in fact David Ladd is very good as the silent boy and I defy you not to be moved when he finally talks to save his dad and calls out from the field to his new ma. There, I’ve spoiled the ending for you. But then I guess you knew it was coming, didn’t you. It is a sort of family film.  But I think it’s a family film with soul, if you know what I mean.
.
. 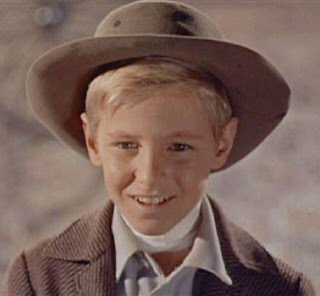 The picture was made by Samueml Goldwyn Jr’s Formosa Productions.
.
.
Anyway, I have a soft spot for this picture. I think it could well have been Alan Ladd’s finest Western hour.