.
.
The other Clint
.
.
Why is Fort Dobbs, a black & white lowish budget Western of 1958 starring a TV lead, such a good film?
Because it is, you know. It’s a taut, exciting picture which sticks in the memory.
There are a number of reasons:
One has to be the excellent performance by Clint Walker in the lead. Of all the TV Western shows I used to watch as a boy, I guess that Cheyenne (apart from Gunsmoke, maybe) (oh, and Tales of Wells Fargo) (then again maybe The Range Rider) (I wish I hadn’t started this point now) was my favorite. There were 108 black & white Cheyenne episodes on ABC from 1955 to 63. I wouldn’t mind betting I saw all of them. Watching these b&w 50s and 60s TV Westerns now, some of them are pretty corny, I must admit, but Clint is still really cool. With his huge size and his quiet, not to say taciturn character, he was the perfect Westerner. And I liked the way he turned his shirt cuffs up. I used to copy that.
.
. 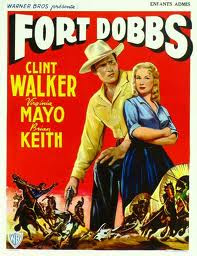 Well, it worked then

Fort Dobbs was his first feature film after becoming famous on TV. He had a bit part as “Sardinian Captain” in The Ten Commandments but I don’t remember that. Fort Dobbs was his first starring role. And he even wore his Cheyenne jacket for a short time (he has to trade it with a corpse). Sadly, however, he keeps his sleeves buttoned down.
He’s excellent in this: quiet, of course, strong, naturally, brave and resourceful in a fight (those dastardly Comanches…) utterly dependable, polite with Mrs Gray (Virginia Mayo, another of the reasons the picture is good, in one of her better Western parts), good with the horrid brat of a son, Chad (Richard Eyer, excellent a couple of years later in Stagecoach West on TV).
.
. 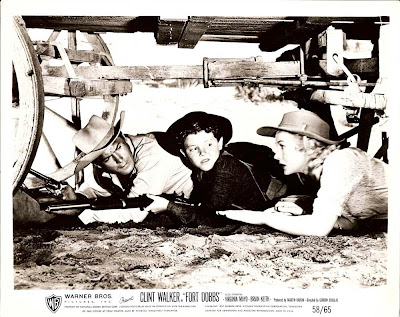 Injuns on the warpath

It’s a Hondo-esque plot. Gunman on the lam (or so we think) Clint comes upon a lonely ranch where live a handsome woman and her young son. The husband is absent (killed, as we later learn) and Clint becomes the surrogate husband/father. Clint himself was to reprise the plot somewhat in the later (and also rather good) Yuma.
The Comanches are on the warpath, so the trio has to make the dangerous trip across Indian territory to Fort Dobbs and safety. On the way they meet the scoundrelly arms-dealer Clett – Brian Keith, very good in his fifth Western feature film and soon, like Clint, to become famous in his own TV series, The Westerner, in 1960. Clett is a bad lot and loses no time in romancing Virginia (whereas Clint has been very respectful). Clett has  mule-loads of splendid Henry rifles, destined for sale in Santa Fe, he says, but Clint suspects that more likely they will end up in the hands of the redskins. And you know how selling guns to the Indians ranks as a heinous crime in Westerns. Somewhere on the scale of wickedness between matricide and cannibalism. It’s a hangin’ matter.
.
. 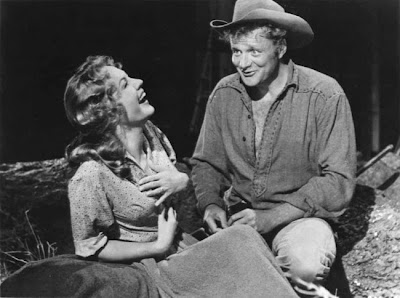 On the set: Mayo, Keith

Russ Conway (every TV Western show you can name and a few you’ve forgotten) is also good as the dutiful but sympathetic sheriff. But it isn’t a big cast (apart from Comanche extras) or a big budget (though someone must have built the fort).
Another reason for its merit is the direction of Gordon Douglas. I have said elsewhere that Douglas produced quite a few undistinguished, not to say plodding Westerns (he said so himself) but every now and then he came up with a real winner. This is one of the winners. The direction is fast-paced, builds tension and while it may not, these days, have you on the edge of your seat, it probably did then and is still quite exciting today.
.
. 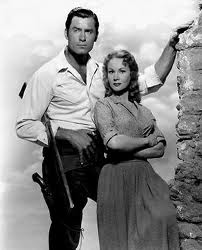 Then again, it was written by Burt Kennedy. Any Western Kennedy wrote was skillfully plotted and had an authentic ring to it. He worked on the story with George W George, who had done The Nevadan with Randolph Scott (excellent). Fort Dobbs was very well written.
Then visually it’s fine. It was photographed by William H Clothier, no less, in a luminous black & white and the beautiful Moab and Kanab UT locations are very classily shot.
Is that enough reasons?
The stirring Max Steiner music. I’d add that. This motion picture really does have a full house of quality components.
.
. 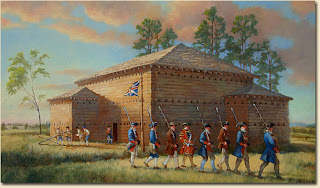