.
.
A bit of a plodder on the whole
.
.
The Last Challenge, Glenn Ford’s twentieth Western (he was probably getting the hang of it by now), is a pretty formulaic oater, yet another take on The Gunfighter: young Turk Lot McGuire (Chad Everett, recently deceased, a TV Western bit-part player) comes to town to provoke the quick-on-the-draw Marshal Dan Blaine (Ford) into a gunfight, to prove he is the fastest gun alive. Everett is more convincing than Broderick Crawford in the 1956 MGM farrago The Fastest Gun Alive (also with Glenn), I will say that, but that’s about as far as it goes.
.
. 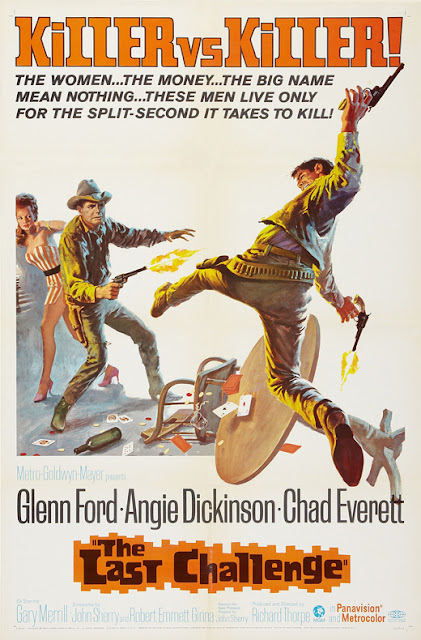 The movie does have some merit: Glenn Ford is in it, for one. He was never bad and anything he was in was lifted. Then we have Jack Elam, briefly, and it’s always fun watching One-Reel Jack. Royal Dano is an Indian. Theer’s a misjudged scene in which the marshal gets Dano and his fellow Indians drunk to stop their attack, saying, ‘A drunk Indian is better than a dead anybody.’ It leaves a sour tatse in the mouth.

.
.
Angie Dickinson is a saloon gal (again). I spotted Vaughn Taylor in the general store; I always liked him as a townsman.
The photography is also quite good (Ellsworth Fredericks of Friendly Persuasion and the ’57 Last of the Badmen), with Joshua Tree and Old Tucson locations. And the direction, by veteran Richard Thorpe (71 Westerns 1924 – 1967; this was his last, and the only one he produced; he’d done Vengeance Valley, a particular favorite of mine) is professional and workmanlike.
.
. 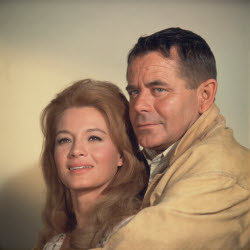 But the Albert Malz (as John Sherry) screenplay, from his own novel, is pretty corny. The whole plot is routine and plodding and the characters do not develop in any interesting way.
.
. 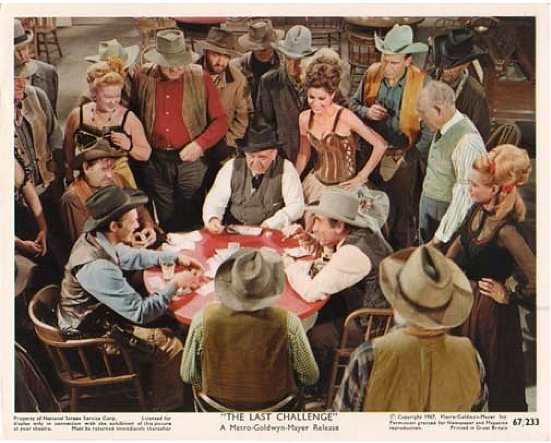 What a great place. Like Linda Hunt and Kevin Kline in Silverado, that’s where I want to be

For the second time (it happened in The Fastest Gun Alive too) Glenn has his gun buried in a grave.
Dennis Schwartz said of it, “The tired story never gains any energy as it slowly drags its feet over several uninteresting incidents until the final showdown.”
.
.
You can’t help feeling that since The Rounders, Glenn Ford had lost some of his magic. Not that he wasn’t good; he was always good. Just that he was unlucky with parts or was choosing unwisely. Maybe there just weren’t the decent Western roles around any more as the 1960s dribbled to their conclusion. Day of the Evil Gun the following year wasn’t really better. And then it was Disney and TV stuff. Sad.
PrevPreviousA Time for Killing (Columbia, 1967)
NextSmith! (Walt Disney, 1969)Next