Directed by what we would have to call a lesser light of the Western, Lamont Johnson, who had done only TV shows before (but was later to do Cattle Annie and Little Britches) and hardly the box-office smash of 1972, A Gunfight was in fact an interesting movie. 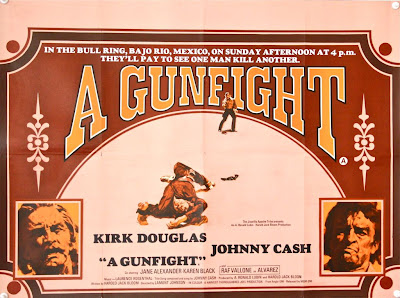 .
It took the dime-novel/Western movie quick-on-the-draw myth (click here for our essay on that) to its logical and absurd extreme by imagining two lightning-fast but washed-up gunfighters who together decide to sell tickets to a showdown shoot-out in an arena, winner take all.
The movie was financed by the Jicarilla Apache people and one might have thought they would have gone for a story about the Battle of Cieneguilla or Kit Carson and Fleches Rayada or something but nay, they preferred a gunfight.
.
. 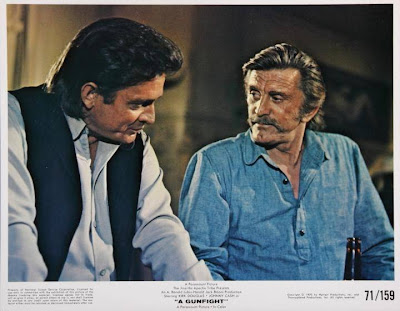 .
The protagonists (rather than protagonist and antagonist) were Kirk Douglas as Will Tenneray and Johnny Cash as Abe Cross. Douglas managed to keep his sometimes tiresome histrionics largely in check and Cash was quietly dignified and very good.

One of the problems with a film of this kind, think you, is that there is inevitably a long build-up, with sub-plots and distractions, but then a last-reel (anti-)climax that is over in a flash, with only one film star the winner. Wrong. The enigmatic ending of this movie (some would say a cheat) plays with that expectation, I think rather well, and not in the cop out Warlock way either, when Henry Fonda just walks away from drawing on Richard Widmark.

The idea was taken up by later pictures such as the shocker The Quick and the Dead in 1995 (a very poor film) so it didn’t put the pulp novel/B-movie idiocy to rest but it was most original at the time. It plays on the idea of Western as tragedy and the (bullfight) arena in which it is staged appears like some Greek theater – or the Colosseum.
.
. 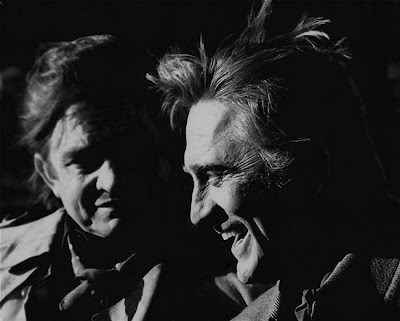 .
Support acting is good, too, with Robert J Wilke as the sheriff and a Carradine (Keith of that ilk) as the young wannabe gunslinger who, er, cashes in his chips. Raf Vallone is the impresario. Douglas’s son plays Douglas’s son.
It was photographed by David M Walsh, who worked on The Hallelujah Trail, Paint Your Wagon and the 1970 Monte Walsh) and is done rather well. I loved the shots of the many and various faces in the audience in the arena, for example, almost like Peckinpah/Junior Bonnerish semi-documentary footage of the rodeo crowd.
The tone of the whole movie is bleak, not to say sour. It’s no razzle-dazzle guns-a-blazin’ Western but rather a somber reflection on the West and the Western which leaves a slightly bad taste in the mouth. The moral corruption is general: the gladiatorial duel only happens because the townsfolk are ready, like ancient Romans, to pay for entry and bet on the outcome, yet, as Abe Cross admits, the two fighters are equally corrupt for staging a murderous combat only for money. The impresario is worse. Only the women of Tenneray and Cross (Jane Alexander and Karen Black) come out of it with any nobility.
Well done anyway for making us think. 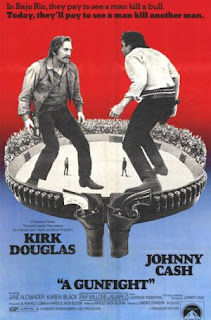