.
The Westerns of Kirk Douglas 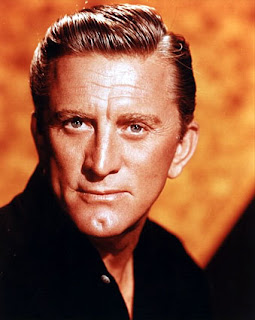 .
Early life
И́сер Даниело́вич, or Issur Danielovitch, aka Kirk Douglas, born in 1916 and so now not that far off his 100 years, is one of the last surviving actors from the golden age of Hollywood. In 1996, he received an Academy award “for 50 years as a creative and moral force in the motion picture community.”
He was the son of Jewish immigrants from Belarus and grew up as Izzy Demsky in New York doing all kinds of low-level jobs. He was a good wrestler at school but loved acting. One of his classmates was Lauren Bacall. He changed his name to Kirk Douglas and entered the US Navy in 1941. He was invalided out in 1944.
He married actress Diana Dill and had two sons, Michael and Joel, but there was a divorce in 1951. He found acting work on stage and radio and in commercials. Lauren Bacall helped him get his first film role in 1946 and he appeared in Chekov’s Three Sisters on Broadway in 1947. Later he gradually developed a persona as a tough guy. He made his first Western in 1951.
Westerns
He made 16 feature-film Westerns in all, between 1951 and 1982. They varied greatly in style, content and quality.
.
.
The early 1950s 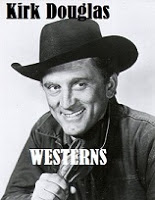 His first was Along the Great Divide, directed by Raoul Walsh for Warner Brothers. It was an uncertain start and though the movie is an interesting psycho-Western, Douglas’s performance was patchy. At times he was very powerful, at times he looked uncomfortable. Wanting out of his Warners contract, in 1952 he agreed to do the next movie, The Big Trees, for no fee, in return for his freedom, an offer Jack Warner thought too good to turn down. This was a logging picture set in California in 1900. Curiously, perhaps, because in the ‘charming rogue’ part he was just going through the motions (though professionally), he comes across as restrained, and the movie benefits – because Douglas did have a tendency to ham it up.
His third Western was the Howard Hawks-directed The Big Sky for RKO later the same year (and by the way, you can find our reviews of all Kirk’s Westerns in the index). This was an ‘early’ Western set in the 1830s, a filming of the famous AB Guthrie Jr novel, and is OK if you like long black & white movies about trappers. Douglas is quite fun as Jim Deakins, the hero, doing that cheery-chappy role he cornered the market in, and he was well supported by an excellent Arthur Hunnicutt.
.
. 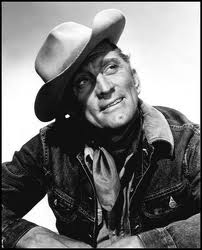 .
Douglas followed that with Man Without a Star in 1955, directed by King Vidor for Universal. The title refers to a wanderer with no star to guide him rather than to a law officer without a badge. Although this Western had its good points, Douglas was unfortunately given carte blanche to overact, which he did. The movie suffers as a result but is a solid, though unremarkable 1950s example of the genre. 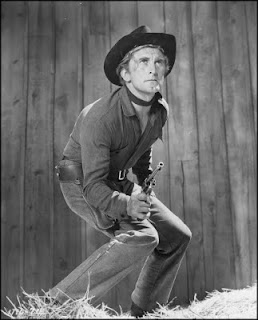 .
.
Later the same year (1955), he did another ‘early’ Western, The Indian Fighter, directed by André De Toth and released by United Artists. Once again Kirk is full of vim but it’s an undistinguished oater (De Toth, too, had a very mixed record).
So his first five Westerns, in the first lustrum (as Rooster calls it) of the 1950s, were not ones to establish him as a leading Western actor to rival the likes of Coop, Fonda, Peck, Stewart or Wayne.
The late 50s: OK Corral and Gun Hill
Suddenly, however, in the late 50s, he made two convincing pictures that were in a different league: he was an excellent Doc Holliday to Burt Lancaster’s Wyatt Earp in Paramount’s very successful John Sturges-directed Gunfight at the OK Corral in 1957, and two years later he was equally strong in Last Train from Gun Hill, again for Paramount, again for Sturges. This story has Marshal Douglas going to Gun Hill to arrest the son of his old pal, rancher Anthony Quinn, and the conflict that is occasioned by that is well handled. These two late-50s Westerns were of a higher caliber than anything Douglas had done before and his performances were more restrained and more piercing. 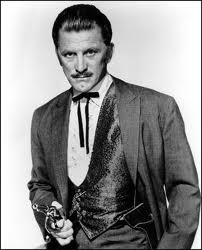 .
The 1960s
In the 1960s, not the greatest decade for the Western movie, Kirk Douglas was in three commercial pictures in which he was satisfactory, The Last Sunet, with Rock Hudson, The Way West, with Robert Mitchum and Richard Widmark, and The War Wagon, with John Wayne, but none of them was what you would call an outstanding Western. However, the decade produced Douglas’s greatest ever performance in the saddle, in my view, a movie that sets him right up there with the greats: I am talking about the contemporary Western Lonely Are the Brave (Universal, 1962). If Douglas is to be remembered as a Western actor at all, it ought to be for this splendid film.
The 1970s
Douglas’s Westerns in the 1970s were at least interesting and different – even if a couple of them were almost unwatchably bad.
There were four, or five if you count Scalawag (I don’t). There Was a Crooked Man in 1971 was a very sad and regrettable come-down for the great Henry Fonda, and it was not helped by Kirk Douglas’s part as chief jailbird (it’s a prison movie), in eye-glasses and bright orange hair. He was back in his ham-it-up mode. The film went for the ‘bawdy-comic’ approach and it flopped dismally. It really is awful. 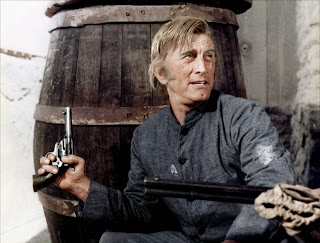 .
.
.
A Gunfight, however, was a small but curious Western which has quite a lot to recommend it. The rather chilling premise is that two aging gunfighters decide to sell tickets to a final showdown, winner take all. Johnny Cash is extremely good as the down-at-heel but still dignified Abe Cross and Douglas is restrained and powerful as the embittered Will Tenneray. The movie, funded by the Jicarilla Apache people, has an enigmatic ending and attempts, with some success, to make a Western into a classic tragedy.
Scalawag, Douglas’s directorial debut, is notionally a Western, perhaps, but is in fact a retelling of Treasure Island, just that the treasure is buried in Mexico. Kirk has license to overact to his heart’s content as the pirate Peg (Long John Silver). The film, shot in Yugoslavia, is very bad, with shocking performances and a dire script.
There followed a political Western, Posse, (Paramount, 1975). Douglas produced, directed and starred in it. Don’t confuse it with Mario van Peebles’s dire blaxploitation flick of the same name in 1993. Douglas’s Posse suffers from a weak script and it is hard to identify with or approve of any of the characters but the idea was an interesting one, there’s plenty of action and there are some very good performances, notably from Bruce Dern. It certainly has something to say, and something relevant to our own age. 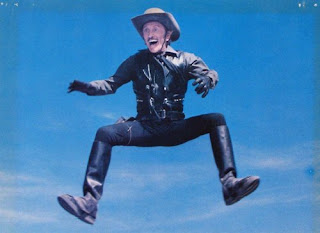 .
In The Villain aka Cactus Jack, Douglas tried a sort of Western live-action cartoon. Comedy Westerns are great if you get the joke but can be tiresome if you aren’t into that sort of humor and I’m afraid I myself am in the second category. It’s like a Western Roadrunner but less funny. The whole show depends on the pratfall. Well, OK, if you like that kind of thing. I’m happy for you.

So we see that Douglas Westerns in the 1970s were unusual, varied and different. None was excellent, though, and some were downright poor.
Later years
In 1982 Douglas did a rather corny but nicely photographed old-fashioned Australian ‘Western’. It’s about a young man who inherits a farm and falls for the daughter of a rich rancher (Douglas) who disapproves. Douglas also plays the rancher’s brother, a grizzled old miner. It’s a horsey story and reminds one in some ways of the old favorite Smoky.
In 1984 Douglas starred with James Coburn in a comedy Western for TV called Draw! Regular readers of this blog will note that it has an exclamation point in the title and must therefore be bad. However, some who have seen it (I haven’t) say that it is quite drôle.
Kirk Douglas hasn’t done a Western since. Fair enough, he was nearly 70 when he did his last one.

.
.
His Western legacy
Kirk Douglas will long be remembered for his Westerns, notably his Doc Holliday in Gunfight at the OK Corral and his wonderful performance in Lonely Are the Brave. But sadly, I would not put him in the front row of Western actors. He was in too many bad Westerns and in too many indifferent ones. He often also overacted in a look-at-me way.
You can’t really talk about Douglas in the same way that you would about Wayne or Fonda or Peck or Coop or Stewart or Eastwood (none of whom needed you to tell you to look at them). You might put him in the second row, alongside Burt Lancaster, say, or Robert Taylor or Tyrone Power or Anthony Quinn. He was, however, a much more convincing Western lead than, say, Rod Steiger or Marlon Brando or Alan Ladd, who will have to sit at the back.
That doesn’t mean that Kirk Douglas Westerns aren’t worth watching. Any of them, except perhaps There Was a Crooked Man and Scalawag, maybe The Villain, which really are rotten, would repay a look and they have their points. Some are interesting or different. If you like your Western leads tough but cheery, athletic and energetic, with a lot of smiles and teeth, well, Kirk’s your man.