A stylized dance of death

Admirers of this movie say that with it Sergio Leone rejuvenated the dying Western. Bernardo Bertolucci said, “It gave back to the directors from the USA the confidence that a Western can be a great movie.” Detractors say it is just a cheap spaghetti western with a big budget and it is too long and too slow. “Tedium in the tumbleweed,” as Time magazine wrote.
You pays for your ticket and you takes your choice. Certainly it is a ‘big’ Western with loads of extras and scenes in Monument Valley and trains. And as Leone was a film buff who loved Westerns, as were Bertolucci and Dario Argento who created the story outline with him, it is chock-full of references to famous cowboy films, which fans will enjoy spotting.
.
.

Inscrutable
.
It has some nice photography too, by Tonino Delli Colli (who had worked on many spaghettis, including the last of the Dollars trilogy) although there are glaring differences between the Monument Valley and Almeria locations (taken to ridiculous lengths when a handful of bright red Arizona dust is thrown onto the olive-gray Spanish dirt of a grave).
The trouble is that if you give the director of cheap spaghetti westerns millions and millions of dollars, he does not necessarily make a great Western. Just even more spaghetti. And while spaghetti can be very tasty, pounds and pounds of it all at once can become indigestible, to say the least.
The Leone/Donati/Argento/Bertolucci plot is so complex that you need to see the film several times to understand it, which is inexcusable really, given the time they had to develop the story and make it clear. They wanted to do Johnny Guitar, The Iron Horse, The Last Sunset, you name it, all at the same time. Maybe they understood that no one was going to give them another blank check to make a mega-Western so they had to cram everything they could in while they had the chance.
There are all the spaghetti hallmarks (you can’t help mixing metaphors with spaghetti, I fear) that we expect, cut-price Techniscope widescreen, endless ultra-close-ups of actors’ eyes, cheap and jangly music, absurd echoing and ricocheting gunshots, bad dubbing.
.
.

Rattlesnake
.
The acting: well,
.
*   Henry Fonda as the bad guy Frank was a masterly piece of casting. He is brilliant. He first turned the role down as the script was so bad but allowed himself to be persuaded by Eli Wallach.
*   Jason Robards is also excellent as the simpatico bandit Cheyenne.
*   Inscrutable Charles Bronson does his strong, silent bit throughout. He’s OK if you like Charles Bronson.
*   Claudia Cardinale looked terribly 1960s in her eye make-up and although pretty was not much of an actress. At least a woman had a proper part this time and played a central role.
*   Gabriele Ferzetti as Morton, the evil railroad baron, was a revered older Italian actor and that was a bit like casting Laurence Olivier as the Nazi.
There is a story that Leone wanted to ‘bury’ the Dollars films by having Eastwood, Wallach and Van Cleef as the heavies killed off at the station during the opening credits, which would have been a good joke, but they wouldn’t do it (spoilsports) and so Jack Elam, Woody Strode and Al Mulock (who had been in The Good, the Bad and the Ugly) stood in. ‘One-Reel Jack’ was used to being shot early in films but had perhaps hoped to get beyond the titles.
.
.

The opening shoot-out
.
The music is by Ennio Morricone, of course. Each character has a theme, like a (very) poor man’s Wagner opera. The trouble is that Cardinale’s theme is woo-woo Hollywood angels and over-lush strings, Fonda’s is a jarring jangle, Robards’s is an irritating faux-comic clippety-cloppety and Bronson’s is a grating harmonica. The soundtracks of Morricone, oddly much lauded, were always trite and banal and usually maddening by the end of the movie, as in this case.
Like all spaghetti westerns, the sound was dubbed on afterwards and is phony and overdone.
.
. 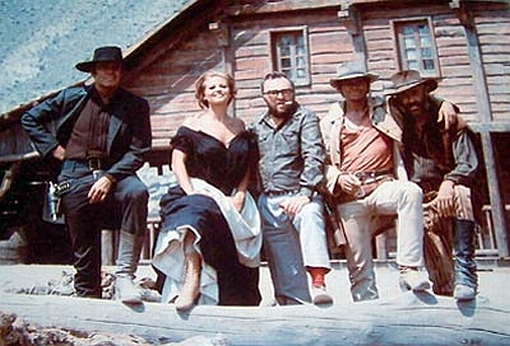 Director and principals
.
The pace is lethargic to the point of catalepsy. People move ponderously, there are aching pauses between their lines (perhaps Leone thought it made the lines more momentous) and they even speak slowly. 164 minutes of this (Paramount cut 25 minutes or so in 1968 but in 1984 the cuts were, sadly, restored) gives a new meaning to the word tedious. Now, you want to make something of a good final showdown. Not the five-second exchange of fire that these things really took. You want some tension and build-up. But Leone takes this ad absurdam. He doesn’t just want to wring the most out of a scene, he flogs the horse 15 minutes beyond its death. When you find yourself saying in the middle of a stand-up shoot-out in a Western ‘Oh come on, get on with it’, there’s something wrong with the director. OK, he wanted a stylized dance of death, but for quarter of an hour?
As so often, Fonda makes it. He is chilling as the cold-blooded killer. He’s like a rattlesnake.
.
. 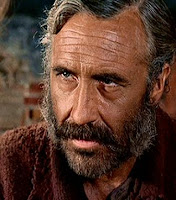 Cardinale, very sixties
.
Christopher Frayling has a whole chapter on this movie in his Spaghetti Westerns: Cowboys and Europeans from Karl May to Sergio Leone (IB Tauris, 2006) so peruse that if you want more, though in my view auteuriste Euro cinephiles of this kind read far too much into these pictures: they’re cowboy films, for goodness’ sake.  The movie is certainly a landmark in the history of Westerns and interesting in many respects. It’s long and impressionistic, almost a fantasy Western or one remembered in a (very long) dream. Someone called it a Monument Valley of the Dolls, which was clever and apt.
If only Leone hadn’t shot the whole thing in slow motion. I know slo-mo was fashionable in the 60s but the whole film?
It’s hyperbole. It’s grand (horse) opera with Morricone music, heaven preserve us. It didn’t really do well in the States but was huge in Europe and is probably still showing in Paris and Berlin somewhere in some art-house theater. Sorry, but when it comes on TV these days I skip it. I just haven’t got the stamina.