Kirk Douglas hadn’t got on at all well with director Raoul Walsh in Douglas’s debut Western, the noirish Along the Great Divide in 1951, and he also wanted out of his Warners contract. He agreed to do this second Western, the following year, without pay in return for his freedom. Jack Warner jumped at the offer. The result was a low-key performance where Douglas said the lines and did what was required.
.
. 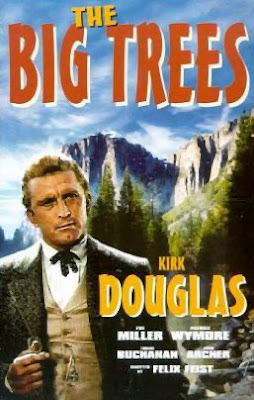 Restrained
.
And yet curiously, exactly because of that, it’s one of his better performances. He had no interest in hamming it up and despite playing a charming rogue, he did it with a restraint that was sometimes lacking in his acting. The film benefits.
Not that it’s a particularly good movie. It’s a semi-Western in the sense that it’s set in California in 1900. Like Alan Ladd’s Guns of the Timberland, or indeed we could right back to William S Hart’s 1918 picture Blue Blazes Rawden, it’s a logging picture with the cry “Timber!” used (too) many times and much intercut stock footage of redwoods crashing to earth.
The great advantage the movie has is quite a big part for Edgar Buchanan, as Yukon Burns, who starts out Kirk’s pal but turns against him when Kirk tries to dispossess the honest religious folk (Quakers, perhaps, though this is never stated) who live, bucolically, among the redwoods. Edgar becomes marshal (he often wore a badge in Westerns) and is great.
.
. 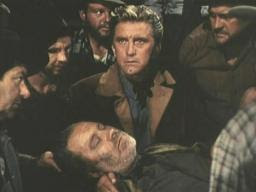 The death of Yukon
.
The rest of the acting is a bit nondescript. Kirk has two women to dally with, Eve Miller as a saintly but feisty member of the religious community and Patrice Wymore as the much raunchier Madam. They are both OK. John Archer is Frenchy, Kirk’s right hand man who also turns against him. He’s OK too. They’re all OK.
There’s Bert Glennon photography of Eureka and Redwood Groves locations, so that’s good.
.
. 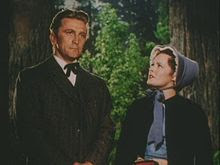 Right and proper
.
On the downside, the music (Heinz Roemheld) is poor – far too lush and sentimental. The Quaker girl has very bright red 1950s lipstick which looks out of place. There’s melodrama galore and some of the action shots, such as Kirk running along the top of a log train, look false and staged. There is a spectacular train crash. I enjoyed that anyway. These days Westerns can’t afford to have a train at all, never mind crash one.

It was kind of inevitable that Kirk would turn from exploitative, unscrupulous capitalist into a Californian tree-hugger, and he duly does. It’s a bit Angel and the Badman-ish in that way as the Quaker leads the rogue (who’s decent really) to the way of truth and light. Mind, I can’t see Kirk sticking in that marriage. I think he’d be off after Patrice again before too long…
.
. 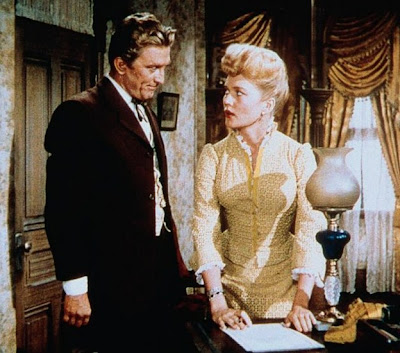 The fun way to go
.
The film was directed by low-budget movie specialist Felix Feist. This was his first Western. He only did three. It’s quite a pleasant entertainment. Unexceptionable but unexceptional.
.
PrevPreviousOpen Range (Universal, 2003)
NextMan Without A Star (Universal, 1955)Next

PrevPreviousOpen Range (Universal, 2003)
NextMan Without A Star (Universal, 1955)Next
Jeff Arnold © 2022 – All rights reserved – Designed by BetterCallChris
Scroll Up