King Vidor direction, Kirk Douglas lead, Borden Chase/DD Beauchamp script, Technicolor photography by Russell Metty: it should have been good. And it wasn’t bad. But in the last resort Man Without a Star is a fairly conventional 1950s Western that fails to make it into the list of greats. 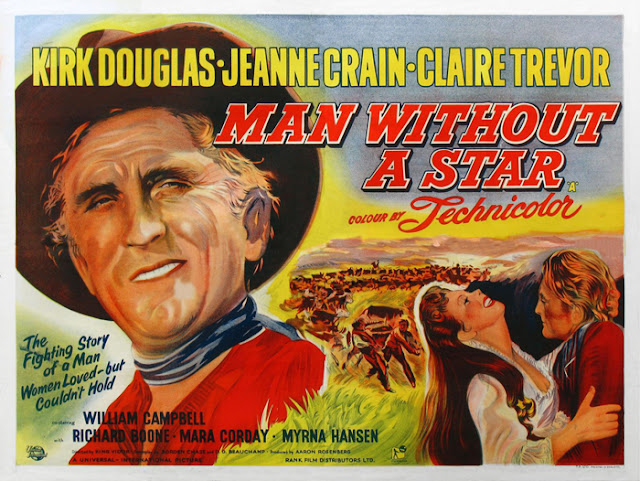 Well, the artist tried to capture Kirk but…

.
It starts nicely, with Texan Dempsey Rae (Douglas) bumming a ride on the railroad up into Wyoming, to escape the barbed wire and find pastures new. He takes under his wing a green kid, Jeff (William Campbell) who reminds him of his killed younger brother. They are accused of murdering a brakeman but it turns out to have been Jack Elam, in one of his shortest parts ever as “Knife murderer, uncredited.” One-Reel Jack strikes again. They sign on at a cattle ranch of which Jay C Flippen is the foreman Strap Davis.
So far, so good. The ranch is owned by Eastern rich dame Reed Bowman (Jeanne Crain – The Fastest Gun Alive, Guns of the Timberland, lesser Westerns, really), who wants to make big bucks in three years and then get out, even if it means killing all the grass and ruining the smaller ranchers. These ranchers want to fence off some grass with barbed wire for winter feed. Of course, Dempsey falls for her, though he despises her too. She fires decent Flippen and hires a Texas gunman in black, a splendid Richard Boone (well, he was always splendid), and Douglas and Boone ‘go back’. They know each other from Texas and it ain’t friendly. The stage is set for conflict and the range war provides the context, with Dempsey the wire-hater siding with the fencers…
.
. 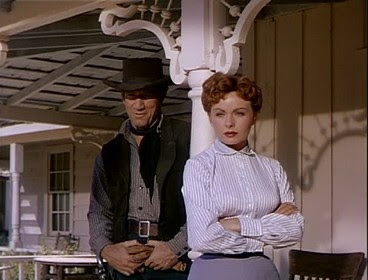 Well, OK. Nothing wrong with that. There have been worse Western stories. But Douglas overdoes it as the cheery chappy, strumming a banjo and singing in the saloon once too often. The kid, Campbell, isn’t convincing in the way he goes from tenderfoot to hardened killer in one reel. Crain is too Hollywood smooth to be a tough-cookie Wyoming rancheress.
.
. 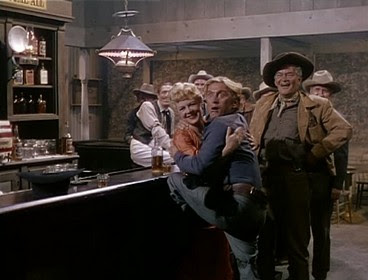 Apart from Boone, the best is Claire Trevor as saloon madam Idonee. She brings class and energy without overacting. Sheb Wooley is also good in his small part as top hand, Latigo. He had admittedly small parts in a lot of very good pictures, from the Errol Flynn vehicle Rocky Mountain in 1950 right up to Silverado in 1985 and including The Lusty Men, Giant, Wild Rovers and The Outlaw Josey Wales. High Noon, of course. It’s a good list.
The look of the thing is nice, with Thousand Oaks, Cal standing in successfully for Wyoming and sweeping grassland cattle country.
.
. 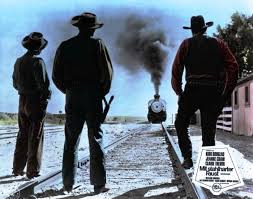 I remember this Western from when I was a boy (Bronze Age). I recall I thought that the man “without a star” meant a lawman who had no badge. It turned out to be a reference to the fact that Kirk has no guiding star to follow, he’s just driftin’. That figures. Remember, in Westerns cowboys can’t “travel” from Texas to Wyoming. They have to “drift” there.
The film was a success at the box office so they got something right. Kirk was pretty popular, of course. It was remade for TV as A Man Called Gannon in 1968 with Tony Francisoa and Judi West in the leads. I don’t mind the 1955 movie. It’s alright. But for me, that’s about where it stops and Kirk Douglas dealt with similar themes way better in Lonely Are the Brave.
.
PrevPreviousThe Big Trees (Warner Bros, 1952)
NextLast Train from Gun Hill (Paramount, 1959)Next