.
.
A menacing game of chess
.
.
Bad Day at Black Rock is a very good film. You can argue whether it’s a Western. It’s a Western in the sense that it’s set in the West (Arizona or California, it isn’t quite clear; it’s very well photographed by William C Mellor up at Lone Pine locations in the eastern Sierra Nevada) and contains many references to the West usually in terms of the old West and the passing of the West. The characters in the town wear cowboy hats and have Western names like Reno, Doc and Tim Horn. Spencer Tracy, Clint-like, comes into town, a stranger, and rights wrongs, before leaving again.
.
.
In a way it’s a reverse High Noon because the scared but gritty lone good guy comes in on the train and finds a whole town of bad men. It’s an anti-Western in the sense that the good guy wears a suit and is from the city, while the country town Westerners are the corrupt ones.
.
.

They stand, vertical, they move: it’s a game of chess
.
This West is dying. Nothing grows but wild flowers on graves. The residents of Black Rock are all men (Anne Francis, probably imposed by the studio, is out of place and overdressed and made-up; her role should really have been another weak man). There are no families. The cowboys do not work and didn’t go to the war. The doc (Walter Brennan) is also the mortician. He is “consumed by apathy” even if he tries, Rio Bravo-like, to redeem the fallen, drinking sheriff (Dean Jagger). The only youthful character, a blond James Dean look-alike (John Ericson) is weak and in on the conspiracy. His sister says “He’s a pushover for a muscleman” – early 50s code, presumably, for homosexuality. The town is ratty and decaying. Lee Marvin is made sheriff at one point and straps on a revolver which he attempts to twirl. He is playing at cowboys.
.
. 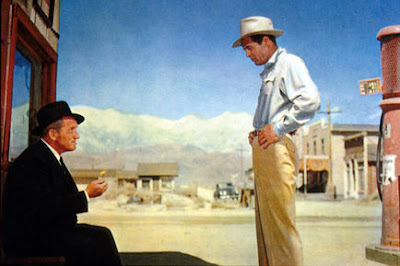 Tracy and Ryan: both superb
.
Spencer Tracy and Robert Ryan as the principals are both superb. They face off and come to the inevitable Western showdown with courage, strength and skill, though in this showdown gunmanship is beaten by technological innovation. Tracy and Ryan do not waste time with acting tricks or facial contortions; they simply are John Macreedy and Reno Smith. With Lee Marvin and Ernest Borgnine as Ryan’s low-life heavies and Water Brennan as the soured Doc, the support acting is also magnificent.
.
.

The hotel lobby: it’s a play
.
John Sturges was a man’s director of action films (The Magnificent Seven, The Great Escape, Gunfight at the OK Corral and so on) yet here he handles a tense psychodrama with consummate skill. Much of the talking takes place in the hotel lobby, like a play. The characters do a lot of standing still and plotting, then one moves to another part of town. It reminds you of a chess game.
.
. 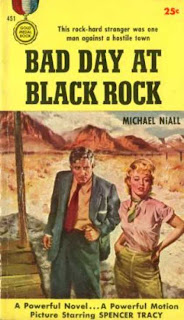 It was actually based on a story, Bad Day at Hondo, by Howard Breslin
.
It was a ‘big’ film, a full-color CinemaScope MGM star vehicle, yet in its B-movie title, the ‘da-da’ André Previn music over the rushing train and the titles, its shortness (81 minutes) and its small cast it also seems like a minor Western. Sturges and Mellor use the CinemaScope to emphasize the isolation (and creepiness) of the town and characters, the emptiness and loneliness. Macreedy is also lonely and lost. He too is changed by these 24 hours in Black Rock.

The film was one of the few to address seriously the issue of the mistreatment of Japanese Americans in the 1940s. Is it a social-problem film, a noir, an existentialist play or a Western? Bof. It’s a fine movie, anyway. If it is a Western, it undermines the whole myth. It was in any case probably Sturges’s finest work. 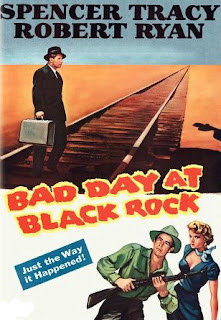