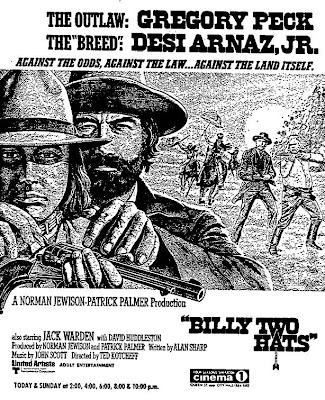 Gregory Peck’s last excursion in our noble genre was a ‘matzo-ball western’. Or it was filmed in Israel anyway. But this is no cheap Eurotrash; it’s a classy, gritty, tight tale written by the excellent Alan Sharp (Ulzana’s Raid) but this time with Peck in the aging toughie role instead of Burt Lancaster.

Perhaps because Sharp was a Scot, Peck had to play one. This was unfortunate, as it always is when Hollywood actors try foreign accents. Gregory makes a good stab at it but it never really works. Even when specialists like Meryl Streep do it, it still sounds phony. It’s a pity because Peck is after all Peck and was always splendid in Westerns.

The setting is the same as that of Ulzana, Arizona, and we have desert and Apaches. There is almost something Elmore Leonardish about the tale. It’s spare, convincing, realistic.

Mediocre bank robber Arch Deans (Peck) rescues his friend and partner, Billy (Desi Arnaz Jr., very good) from the clutches of Sheriff Gifford (Jack Warden, excellent) and his friend Copeland (David Huddleston, also top class), owner of a ratty saloon in the middle of nowhere. I also liked Copeland’s stout Indian wife (Dawn Little Sky), stoic and imperturbable. The sheriff has his prejudices but tries to be a decent man. Copeland is old but still hoping for better things.

It’s a pursuit drama. The law chases the fugitives through the desert as they try to cross over into Sonora. They pay a farmer (John Pearce, solid) to carry broken-legged Deans to San Carlos in a wagon. Billy meanwhile stays with the farmer’s young stuttering wife Esther (Sian Barbara Allen, good). The Apaches intervene. One has a parasol.

The Israeli scenery is fine – arid and hostile – and very well photographed by Brian West. The music (John Scott) is dark and modern and rather good. The costumes and production design (Anthony Pratt) are very convincing and the look of the thing is right. The Apaches’ teeth are rotting. It was directed by one Ted Kotcheff, not the first name that springs to your mind when you think of Western directors but he did a good job. Pursuit tales can move very slowly and seem long. This one has enough tension and pace to keep us gripped. Kotcheff elicited good performances from the cast. Of course he had Peck, but the others shine too.

This is a good little Western. It’s not Peck’s best (after all, it would be very hard to better The Gunfighter or The Bravados) but it’s rather like The Stalking Moon of five or six years previously: it’s a tense, well-written, exciting drama with fine performances. Pity about that accent.