Although cattle were vital to the West, and the Western, there were few really good cattle drive movies in the 1950s and 60s, for two reasons:

First, Red River (1948) was hard to top. It had been done. 9000 head, stampedes, river crossings, sweeping vistas, cowpokes fighting, it had it all, in spades. It was huge, it was very big-budget, it had fabulous photography and truly great acting, and it was also one of the best Westerns ever made. What were you going to add to that in a later movie?
.
. 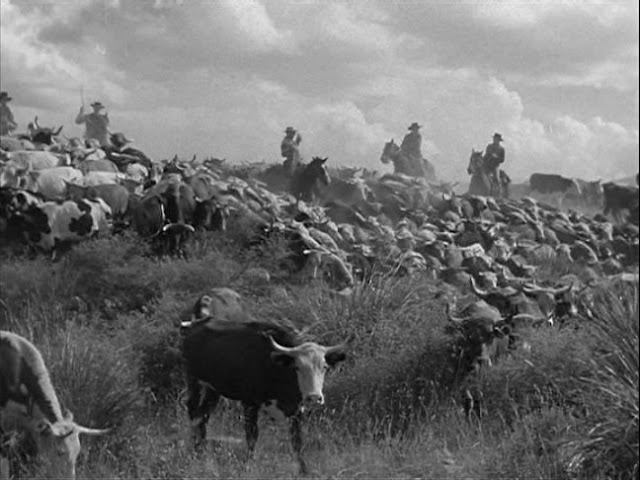 Red River had already said it all
.
Second, there was the cost. Amassing so many steers and managing them was prohibitively expensive. Such cattle-drive Westerns as did appear tended to incorporate, er, stock footage from earlier pictures, even silents. Of course, as color became the norm, that became impossible to do.
.
. 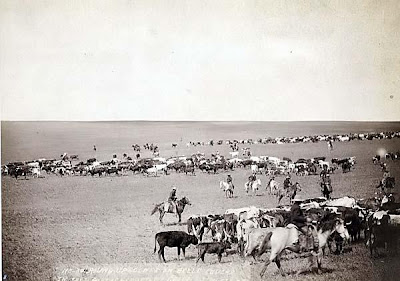 Essential to the West, and the Western
.
There were cattle movies, though, quite a lot of them. Texas punchers drove their herds to Wichita, Abilene or Dodge and made merry hell there. Abilene Town (1946) and Abilene Trail (1951), for example, or Wichita (1955) and any number of pictures set in Dodge. But these tended to concentrate on the merry hell part rather than showing huge herds of longhorns.

There was cattle royalty: a Cattle Queen (Maria Hart) in 1951 and a Cattle King (Robert Taylor) in 1963. And, of course, Barbara Stanwyck was Cattle Queen of Montana in 1954. Chisum (1970) was essentially a cattle baron picture. But these weren’t really cattle-drive movies; they were more about cattle barons combating outlaws and rustlers. 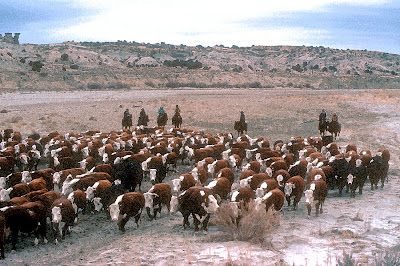 Vengeance Valley was a proper round-up/cattle-drive film, as was the John Wayne vehicle The Cowboys in 1972. Cowboy, of course, had Jack Lemmon learning the trade from Glenn Ford in 1958. There seemed to be fewer and fewer actual steers, though. By the time we get to the twenty-first century and Open Range (2003), Robert Duvall and Kevin Costner appear to be driving three cows and a chuck-wagon. The writers of Lonesome Dove were even asked to excise the cattle altogether from the story. As this was about Texas cowboys driving a herd to Montana, that would have been slightly difficult…
Joel McCrea twice rode the cattle trail (three times if you count the start of Wichita). He was young Dean Stockwell’s mentor in Cattle Drive (1951) and seven years later he had been promoted to trail boss in Cattle Empire.
.
.

It’s not really about an empire, more a cattle drive with skullduggery

In Cattle Empire McCrea acts against type and is harder than his usual quiet, decent but brave persona. He’s almost a SOB in fact, though he turns out, phew, to have been a goody all along. Director Charles Marquis Warren, who also of course contributed to the screenplay, and who had done the excellent Trooper Hook with McCrea the year before, starts us off interestingly with townsfolk in a circle staring at something on the ground. The object of their attention is revealed to be Joel McCrea (looking slightly stockier by 1958, it must be said) and they are looking to lynch him. What? Lynch Joel? The town seems to be populated by handicapped people (they said cripples in those days) and the folk appear to be suggesting that John Cord (McCrea) is to blame for their blindness or armlessness. It’s all very mystifying.
.
.

Gradually all is revealed, as Cord, Mr. Cord to you, becomes boss of the trail drive and drives his men as hard as the beasts. It’s a proper drive, with lots of cattle. They even have Wishbone from Rawhide on the chuck-wagon, so that’s cattle-drive aristocracy – though in fact Rawhide wouldn’t start till the Following year so I guess Paul Brinegar was just rehearsing. He is Thomas-Jefferson Jeffrey, always arguing with his brother George-Washington Jeffrey (TV Western stalwart Hal K Dawson).

Wishbone’s on the chuck wagon

Rather unconvincingly, as well as the one-armed man and the blind one coming on the drive, they also have two pretty women (Phyllis Coates, of many an oater, and Gloria Talbott, from TV Westerns and McCrea’s The Oklahoman). In Cattle Drive in 1951 there had been no women at all, which is probably more authentic but not very Hollywood.

There’s a bad guy, Garth (Richard Shannon) who tries to beat them to market and then ambush them when he fails. This allows for gunplay at the climax. You need gunplay at the climax of a trail drive, which is why Red River’s cop-out ending was its only weakness.
The overall impression you get at the end of the movie is that Joel was tired of playing the soft-hearted good guy and wanted to be a heavy for a change. But he just couldn’t manage it. Too decent, you see. 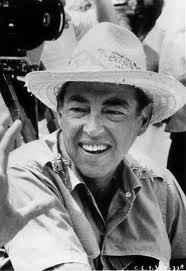 Warren behind the camera

There’s very good direction from Warren (of course he was enormously experienced in the genre) and also enjoyable cinematography by Brydon Baker, not a name I knew but he had been doing Westerns since 1929. It’s well done and the Lone Pine locations are nicely shot in Color Deluxe and it’s in CinemaScope. Hard to get all those cattle in otherwise.
.
. 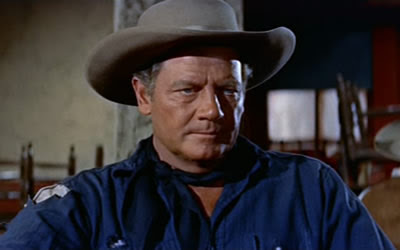 Talking of Lone Pine, when Warren started directing Westerns instead of just writing them, he asked Budd Boetticher for advice. Using Lone Pine locations was part of it.

Paul Sawtell re-used his music for The Cariboo Trail.

Cattle Empire is no Red River but it’s an enjoyable cattle-drive Western which more than holds its own with the others of the genre. 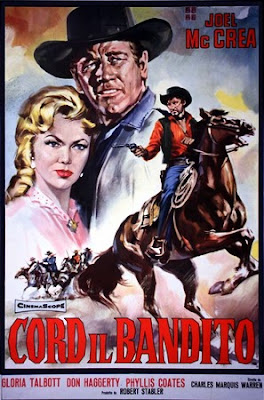 Looking a bit like Robert Ryan in this one.
Interesting title in Italian, playing up the hero’s bad-guy cred.