A nice old-fashioned Western Well Worth a Watch
.

It is probably the best of the series of Westerns that Paramount made from Zane Grey stories, certainly far better than Man of the Forest. 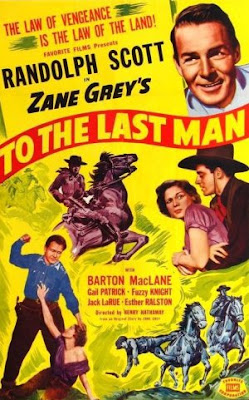 .
Sure, it looks old-fashioned to us now but it has real quality. Two Kentucky feuding families move out West after the Civil War and take their feud with them. It’s a bit like the Tonto Basin or Pleasant Valley War in Arizona in the 1880s and 90s (which made the Hatfields and McCoys look like a childish squabble) with Romeo and Juliet grafted on. You see, Randy, a Hayden, falls for Esther Ralston, a Colby. They defy their families and insist on falling in love. Far West side story.

Despite the tacked-on sudden ending, with happy music and a wedding photograph, it is a cold, harrowing tale of blood and vengeance in which even intelligent, decent folk seem unable to avoid being drawn into murder and mayhem, and the less intelligent crave it. The ending is apocalyptic.
Scott is very good. He doesn’t appear till half way through the movie (in the story he remained in Kentucky till he was grown) but when he does, he immediately dominates it. He is steely, strong and steady, if that’s not too alliterative.
.
. 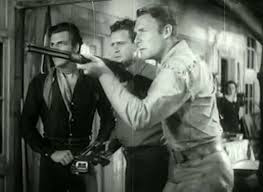 The Hayden boys stand off the evil Colbys

Furthermore, he has shaved off that pencil mustache. That was because Jack Holt hadn’t been in the silent version but rather the unwhiskered Richard Dix, so there was no problem matching up old footage.

Noah Beery (Sr) is also very powerful as the leader of the Colby clan. He had started in The Squaw Man in 1918 so was a true Western pioneer and was nearly always a nasty villain, unlike his son Noah Beery Jr, who followed in his father’s hoofprints as a respected Western character actor but who usually portrayed a genial cowboy. Noah Sr was less famous than his younger brother Wallace Beery. Wallace did a mere 21 Westerns, silent and talkie, including some good ones. But anyway, where were we? 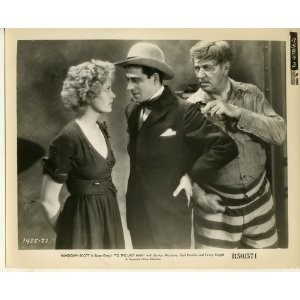 Heroine Esther Ralston, her evil lover Jack La Rue and her pa Noah Beery
.
Shirley Temple, 5, has an appropriately little part. We really don’t want too many 5-year-old girls in Westerns, do we. And she hollered, just because a badman shot her doll. Honestly.
Buster Crabbe is one of the Hayden clan, Randy’s brother-in-law, and Fuzzy Knight has a small part (and a song, of course). Apparently John Carradine is in it too, as ‘Pete Garon’, though I didn’t spot him.
All in all, this is a nice 30s Western that will still repay a watch. It was remade as the dull Thunder Mountain with Tim Holt (son of silent hero Jack) as the hero (and Jason Robards Sr in it too) in 1947 but nothing was gained. Watch Randy’s version. You’ll enjoy it.

PrevPreviousQuigley Down Under (MGM, 1990)
NextCattle Empire (Fox, 1958)Next
Jeff Arnold © 2022 – All rights reserved – Designed by BetterCallChris
Scroll Up