Allied Artists was a transmogrification of the old B-movie producers Monogram and they had big dreams. This oater is a step up from the old Monogram second-features.  It’s a 73-minute color picture, for one thing. Still, it was hardly an A-movie. The actors weren’t exactly stellar, the director was a workhorse, the plot and dialogue are played dead straight, and it all moves to its utterly predictable dénouement.

But it’s just fun. You like this cowboy film in the same way that you might like an old pair of slippers or a runty dog. No one’s claiming greatness or beauty but well, you just feel comfortable with them.
.
. 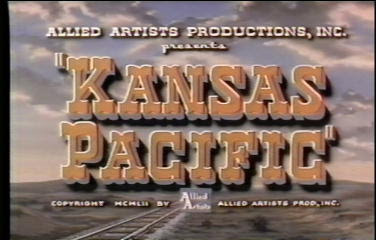 .
Sterling Hayden is the US Army captain undercover as railroad engineer, determined to build the Kansas Pacific line out to the West to provision forts for the coming Civil War. So it’s not one of those great Manifest Destiny continent-spanning railroad-building pictures. The railway isn’t being built to bring civilization to the West or tame the far frontier or anything; it’s more a necessity to beat the South.

Of course Sterling had also been a railroad man, but a baddy, in Denver and Rio Grande the year before. Getting typecast here, Sterl.

In this one, though, good old Reed Hadley, usually a gentleman gambler, is badman Quantrill, out to stop Hayden. They are also rivals for the hand of Barbara (Eve Miller) – well, they had to be – but Quantrill hardly gets a look in. Sterling walks away with her, easy. Sterling was only 36 but was plump and not looking his best. Later, of course, he was classy in Dr Strangelove and The Godfather but he made quite a long series of pretty average Westerns (he hated them) and this is one of them. Barton MacLane is Eve’s daddy and Harry Shannon is Smokestack, the crusty engineer, a bit like Paul Fix’s part in D & RG. Classic stuff.
.
. 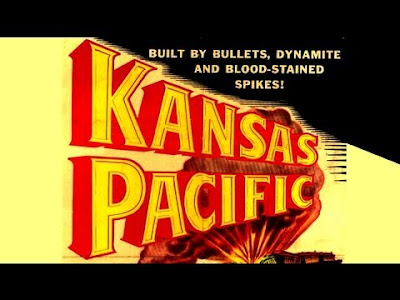 .
It was written by Daniel B Ullman, journeyman screenwriter who bashed out on his typewriter any number of oaters, and directed by good old Ray Nazarro who’d been shouting “action” since 1929.
The movie was shot in Cinecolor, a process which often gives a pleasant almost pastel wash to the print and highlights the reds. However, in this one (or in the print my DVD gave me anyway) everything is suffused with a powder blue. These curious blue-tints are quite amusing as the characters read train schedules written on a blueboard, and the blue-hats (who are blue-hearted villains) fight the heroic light-blue hats. Everyone wears blue suits, shirts or blouses. Even the Kansas countryside is blue.
.
. 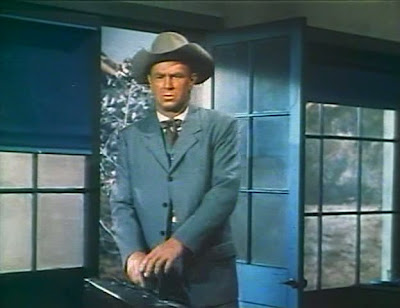 .
There are some good fireworks when a Winchester bullet hits a carload of dynamite and later when Quantrill uses artillery to attack a train. The movie had quite a big budget compared with the Monogram days, even if the locomotives weren’t really blown up, dear (funny how those cannon shots always landed just to each side). Dynamite (invented after the Civil War) plays quite a big part in the story.
There’s plenty of action and Clayton Moore has a bit part as a heavy. This was two years after The Lone Ranger had become the top TV show and Clayton in his tutu was famously saving maidens, villages and what have you with Jay Silverheels doing the dirty work for free. Maybe Clay wanted a break from that by 1952 when it was filmed and decided to act tough. Or maybe he was moonlighting. (A reader tells me it was during a legal hiatus/contract dispute when Clayton was temporarily tutuless).
It’s one of those Westerns set in the 1870s as far as clothes and props are concerned. There didn’t seem to be any other era. But hey, who’s checking?
Give it a try. You’ll smile and feel good until tea time. Walmarts had it on special too.

PrevPreviousDeath of a Gunfighter (Universal, 1969)
NextJohn Wayne: the Columbia Years 1931/32Next

PrevPreviousDeath of a Gunfighter (Universal, 1969)
NextJohn Wayne: the Columbia Years 1931/32Next
Jeff Arnold © 2022 – All rights reserved – Designed by BetterCallChris
Scroll Up