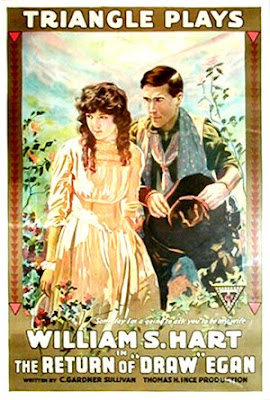 Despite the poster, there isn’t too much lovey-dovey
.
Secondly, there is a slight touch of humor, mostly by way of the wryly amusing dialogue cards, which have a smack of wit about them, both in their wording and their decoration.
We start in New Mexico where Draw Egan (Hart) is a bandit chief with a large posse after him. Holed up in a shack, Draw and the gang make their escape. Only the coward Arizona Joe (go-to Hart villain Robert McKim in a false mustache) is captured (he tried to run away, you see) and goes to jail.
Draw arrives in another town and deals with a saloon varmint. Impressed, a leading townsman of nearby Yellow Dog (great name) hires him as marshal. You can tell that badman Draw thinks this will be a great wheeze.
.
. 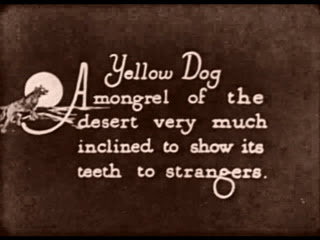 It’s a terrific town and it sure needs tamin’
.
Once at Yellow Dog, of course, Draw falls immediately (he only has 53 minutes of film, you see) for Myrtle, the town elder’s daughter (Margery Wilson, billed as Marguery on the card for some reason, in her second Hart Western of five). They go riding, she sidesaddle, of course. Here we are in classic Hart territory, the bad man redeemed by the love of a good woman.
.
. 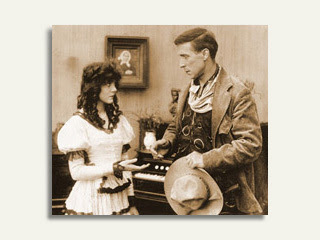 The pure Myrtle meets the new marshal
.
But guess what, Arizona Joe is released, arrives in Yellow Dog and threatens to spill the beans on Draw’s murky past…
.
. 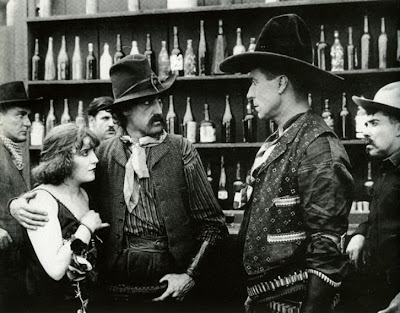 Poppy and Arizona Joe plot the marshal’s downfall
.
Well, I’ll say no more on the ending but you can tell a showdown’s comin’.
The plot thickens because Draw, already attracted by the pure Myrtle, has spurned the advances of the wanton saloon girl Poppy (Louise Glaum, already in her twelfth Western; she had been Dolly in Hell’s Hinges) and as we all know Hell hath no greater fury etc. Poppy takes up with Arizona and together they egg the sporting community of Yellow Dog into ridding the place of the “goody goody” marshal.
Well, OK, it’s corny, I know. But I don’t care. It has charm and wit and it’s huge fun. Hart is excellent again (he doesn’t ham it up for the gallery half as much as other silent actors) and furthermore, he is back with Fritz (in Hell’s Hinges he had spurned the pinto, two-timing him with some flighty bay mare).
‘Tough marshal with a past tames town’ became, of course, a standard Western plot but this is a very early version of it.
.
. 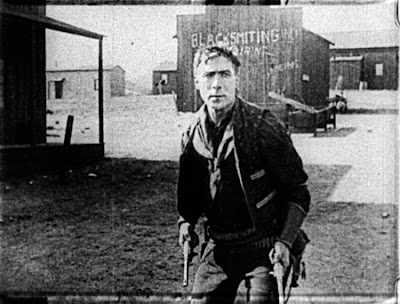 Town-taming marshal. I love the spelling of the sign behind him. They probably did smite blacks, the skunks.

.
Once again there is good photography and the showdown is cleverly done with reflections in a window. Directed by Hart and written again by C Gardner Sullivan, with Joe August cinematography (he was of course to go on to great things, including work with John Ford) and production by the great Thomas Ince, The Return of Draw Egan is a very good Western.
The New York Times review of Monday, October 2, 1916 said, “‘The Return of Draw Egan’, the new feature film exhibited yesterday at the Rialto, is an unusually good western picture of the William S. Hart school. It is better than most films of its type because it tells a reasonable story, or at least it tells its story convincingly, which amounts to the same thing. Hart does this Bret Harte sort of thing so well that he must begin to fear he will spend the rest of his life in chaps and a saddle. He can draw a gun with the best road agents of fiction and can roll a cigarette with one hand and strike a match on his nails with the nonchalance of Will Rogers, so it is no wonder his director [actually, Hart directed it himself] keeps him standing for closeups beside the counter of the Yellow Dog Saloon.”
The five-reeler was re-released in 1924 and was a success again.
A really good film.