Three Bad Men (as also the title of a 1926 John Ford motion picture) is a very good name for Scott Allen Nollen’s new book about John Ford, John Wayne and Ward Bond. The three characters he writes about, and whose lives he interweaves, were sometimes rather unpleasant people. And this is a slight problem because it’s not easy to write a biography of a very unsympathetic person, still less the lives of three. After 340-odd pages of bullying, drunkenness, lying and spitefulness, you do get a bit jaded. Sometimes it’s only a morbid fascination that keeps you going.
Having said that, all three were artists in their way. Whatever Ford’s faults (and there were many) he was a great director who produced some stupendously good work. John Wayne was a very fine actor (contrary to the belief of many) capable of pathos, subtlety and a very wide range of emotion. Ward Bond is underrated as a character actor: like Wayne, he appeared in many low-grade movies but he also achieved several interpretations that show real talent.
As far as Westerns go, lovers of the genre asked to name a dozen or so of the best of all time could well find that they have three or four Ford Westerns in the list – maybe The Searchers, Fort Apache, My Darling Clementine, others – and they could well find that John Wayne starred in some of them too. He might appear more often still in the list with such non-Ford pictures as Red River, True Grit or The Shootist.
Those who do not love Westerns (for such strange people do exist) would also probably think immediately of John Ford and John Wayne as titans of the genre, and if asked to name a Western TV show might well first come up with Wagon Train starring Ward Bond.
.
. 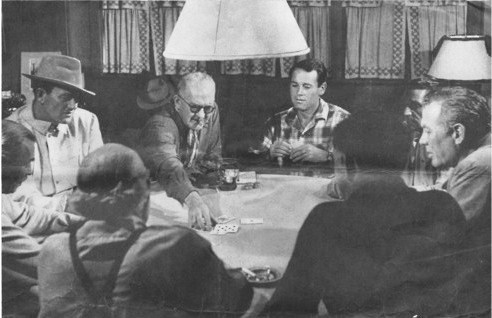 Wayne, Ford, Fonda, Bond: looks like Ford is winning. there’s a surprise.
.
Mr Nollen shows us these three men warts and all. He does not hold back. Hollywood was good at inventing a backstory for its stars. They were often credited with childhoods and adolescences which matched their screen persona. Hollywood was sometimes aided and abetted by the stars themselves, who preferred to gloss over inconvenient truths in their pasts, beef up other elements or even invent altogether. Let us be kind, though, and say that memory can be selective.
John Wayne was a good example of this. Born in 1907, the son of an unsuccessful man who clerked in drugstores, Marion Morrison grew up (in an unhappy family beset by bickering) in Iowa. The family moved to California when Marion was seven and he went to high school there, then to college on a football scholarship. He was only moderately good at football and was dropped from the team. He spent what would have been his Senior year working on the Fox lot shifting furniture and props. He hated horses. That was about as ‘Western’ as Morrison was, until Raoul Walsh selected the prop boy to lead in his talkie epic The Big Trail, released in 1930. John Ford did not ‘discover’ him.
But the king of all mythomanes was John Ford. Wayne was a babe-in-arms by comparison. Ford invented an entire past for himself. You couldn’t believe a word he said. It was a wish list, a dream past. Wyatt Earp had discussed in detail with him exactly how the gunfight at the OK Corral had happened. He had ridden with Pancho Villa in Mexico. The more absurd the lie, the more Ford held to it, and raged at anyone who had the temerity to doubt it.
Nollen quotes one of Ford’s favorite actresses, Maureen O’Hara: “John Ford was the world’s greatest storyteller because he was the world’s most convincing liar. He rarely told the truth and rarely lived the truth.”
Ford was clearly a deeply insecure and unhappy person. He was cruel (especially to his brother, the actor/director Francis Ford), vain, arrogant and a bully. He could be petty, snide and childish. He was utterly insufferable when drunk, which was often. He was unbearably and embarrassingly sentimental. He had a low opinion of women. He comes across in this book as one of the nastiest people ever to sit in a director’s chair.
.
. 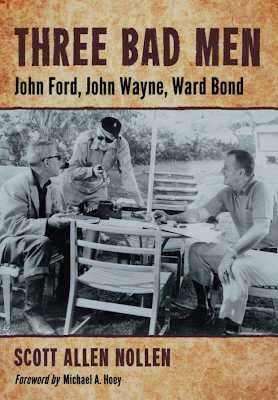 .
And yet… he inspired extraordinary devotion in his acolytes. Members of the famous Ford stock company, many of them, feared him but loved him too. Wayne is a perfect example. Nollen quotes what others have written too, Harry Carey Jr, for example. Dobe wrote, “Ford was a tender loving man, and he was a delicate, artistic man… Yet he was intrigued with machoism. He wanted to be a two-fisted, brawling, heavy-drinking Irishman. He wanted to do what John Wayne did on the screen and clean up the barroom all by himself … There was a part of him that Wayne exemplified physically, something he always wanted to be. So he created that on the screen.” This seems very astute.
Ford seemed to have veritable crushes on some of his actors, including Wayne. Bizarrely, some of them responded, not physically but by being in thrall.
Certainly anyone interested in Ford and/or Wayne Westerns (which will include many readers of this blog) would enjoy reading this book. It’s enjoyable and full of insights into the lives and characters and films of the three men.
It does have its weaknesses. It seeks to be comprehensive and that leads to it becoming, chapter after chapter, a long list of one motion picture after another. Between them, these three men were involved in a hell of a lot of movies. All books these days are too long and this one is too. And telling the story of three lives, the narrative is often broken as we leave the trail we had been following (for example, reading the very interesting account of the making of Stagecoach to find out what Ward Bond was doing in Dodge City). The author’s style is chatty and colloquial, and rather overuses exclamation points, which is fine but somehow doesn’t always suit the tone of the book. There is the occasional odd phrase: “…the fight against Fascism that was spreading like a political cancer across the planet.” Maureen O’Hara was “one of the few women in Hollywood who … did not abate any nonsense.”  But maybe these infelicities have been edited out of the finished text (I read a review copy). Mr Nollen also seems to be as obsessed as John Ford was with the size of Ward Bond’s posterior. We do get a bit tired of this subject by the, er, end.
The author is perceptive about the qualities (or lack of them) of the movies made by or featuring these people. I liked, for example, the point that the wonderful movie My Darling Clementine was about people who really existed (Wyatt Earp & Co) yet was a historical falsification of monumental proportions, while the cavalry trilogy of movies 1948 – 50 (Fort Apache, She Wore a Yellow Ribbon, Rio Grande) was about fictional characters but was really quite accurate historically. Nollen is also admirably dismissive of that dreadful farrago Gone with the Wind.

.
.
A lot of Three Bad Men is fascinating and if you are interested in the movies discussed, you will learn a lot. It also gives more weight to Ward Bond’s (truncated) career than previous works and that is a worthy corrective.
But I would have absolutely hated to have been on one of those booze cruises in the Araner with these three bad, and in  the last resort rather sad men. 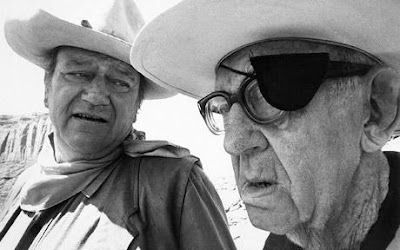