No Country for Old Men (novel by Cormac McCarthy and Paramount movie, 2007)

.
.
Book and film leave you with a hard knot of coldness in your stomach
.
.
Set in West Texas (as was the Coen brothers’ first movie, Blood Simple) in 1980 – a piece of dialogue about a coin situates it exactly in that year – No Country for Old Men tells, faithfully, Cormac McCarthy’s story of a drugs deal gone wrong which develops into a complex pursuit-Western noir. It’s a stunningly good book. I remember I bought it in 2005 the day it came out in Borders in Flagstaff, AZ and I read it while staying at the Plaza Hotel in Las Vegas, NM. Little did I know that the very same hotel (called the ‘Eagle’ and on the Mexican border) would figure in the movie only two years later. It’s a great hotel, by the way, and I recommend it.
.
.
The hero (of a kind), Llewelyn Moss, excellently played by Josh Brolin, is a tough, independent cowboy. He’s a trailer-park rube but he manages some pretty Western maneuvers and he goes his own way.
.
. 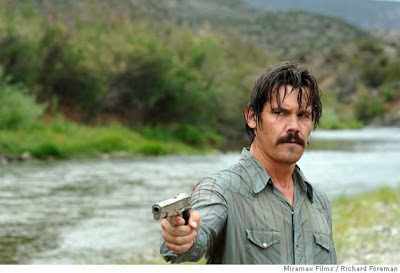 The ordinary guy who is out of his depth
.
.
Ed Tom Bell, the decent country sheriff who is after him, as much to protect him as jail him, is marvelously interpreted by the actor who dominates, Tommy Lee Jones. Mr Jones is a Texas man and a rancher and was the perfect choice. The role moves seamlessly on from his wonderful Pete in The Three Burials of Melquiades Estrada of two years before. He is an actor capable of great subtlety, as this part required.
.
. 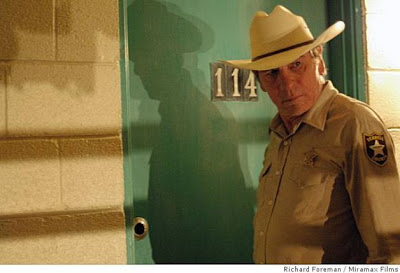 World-weary, wry, out of time
.
As Anton Chigurh, the enigmatic, scary hitman after Llewellyn, with his sinister air cylinder, Spanish actor Javier Bardem, in his 70s haircut, is superb. He is creepy and chilling. When he was approached by the Coens, he said “I don’t drive, I speak bad English, and I hate violence.” The Coens responded, “That’s why we called you.”
.
. 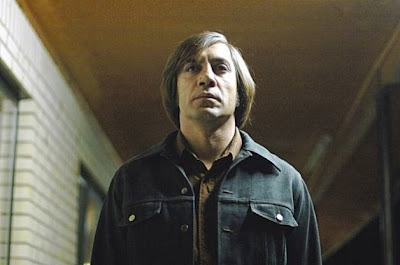 When he learned about the haircut he had to wear, Javier Bardem said he wouldn’t get laid for months afterwards. The Coens high-fived their success, for the hairstyle adds wonderfully to the weirdo effect.
.
Curiously for the narrative and unusually for a Western, these three principals never meet. On one level you’ve just got a druggy crime story with an amoral bad guy, a decent cop and a dumb redneck – the ugly, the good and the bad, you might say – and you root for Llewelyn, the ordinary guy doing his best but out of his depth. But with writers and directors as sensitive as the Coens and with a base novel as truly great as Mr McCarthy’s, this film goes far beyond that. Book and film leave you with a hard knot of coldness in your stomach.
.
. 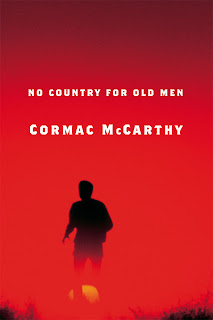 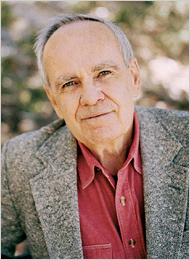 .
The West Texas country of the title (a lot shot in New Mexico) is harshly beautiful and there are wide exteriors finely photographed by Oscar-nominated Roger Deakins (who did outstanding work on The Assassination of Jesse James by the Coward Robert Ford the same year). He paints with light.
Carter Burwell’s lean, low-key music is subtle and sparsely used, underlining the aridity of the landscape and theme.
Of the support actors, all are top class. As Moss’s wife, Kelly MacDonald, a Glaswegian, has a completely convincing West Texas accent (it comes as a real surprise to hear her real voice). The great Barry Corbin is Bell’s aged mentor, and a scene where Sheriff Bell visits with him is reminiscent (deliberately or not, I don’t know) of Gary Cooper talking to his elderly predecessor Lon Chaney Jr in High Noon. Woody Harrelson, who was so fine as Big Boy Matson in The Hi-Lo Country, is the hitman sent after the hitman. In the novel, Sheriff Bell says of the dope-dealers, Here a while back in San Antonio they shot and killed a federal judge. (No quotation marks. It’s McCarthy). In 1979, Federal Judge John H Wood Jr was in fact shot and killed in San Antonio, Texas. Free-lance contract killer Charles Harrelson, Woody’s father, was convicted of the crime. I suppose this was deliberately Coenesque casting, clever, apt, slightly creepy.
.
. 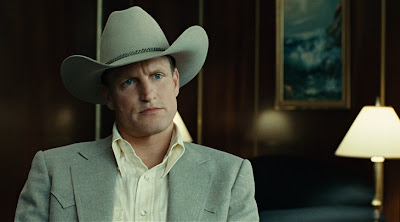 Woody Harrelson, son of a hitman, as the hitman sent after the hitman
.
There are the scariest motel scenes since Psycho.
In some ways it’s a kind of Texas Fargo, with small town folk swept up into major crime, but really it’s an anti-Fargo, hot and southern, not snowy and northern, with chilling, inexorable, lethal criminals rather than comically inept hitmen.There’s a fine portrayal of courage when Ed Tom Bell enters a darkened motel room at night, fearing that the killer is within. He demonstrates that true courage is not the absence of fear but being afraid and doing it anyway.
This is a dark film and the humor (for there is humor) is appropriately black. Actually, the America they show is no damn country for anyone. As is to be expected from the Coen brothers, the direction, writing and editing are outstanding. The picture won four Oscars (best picture, best direction, best writing and best supporting actor for Bardem) and was nominated for four more.
The movie is very violent but it is essentially about violence. From Ed Tom Bell’s opening speech on, there is a lack of comprehension how anyone can be so violent and evil and why.  It is also about aging and the passing of time, as the title suggests. WB Yeats in Sailing to Byzantium put it poetically, That is no country for old men. Sheriff Bell says, “It starts when you begin to overlook bad manners. Anytime you quit hearin’ ‘sir’ and ‘ma’am’, the end is pretty much in sight.” He sounds kinda like your grandpappy and you nod tolerantly at the old boy. But we very soon realize that it’s gone way past that.  Chigurh’s depredations are beyond all hope for decency, and Ed Tom Bell comes to understand that. Later, Bell and his old El Paso counterpart (Rodger Boyce) put it more earthily: “It’s just goddam beyond everything.” 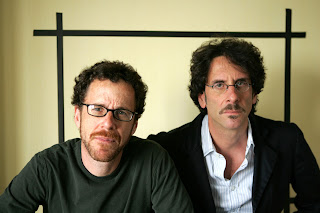