.
.
So bad you laugh
.
.
Jaws meets Moby Dick on the Plains. Great white shark, a white whale, a white buffalo? White elephant, more like.
The Quint-Ahab figure is Wild Bill Hickok, no less and he partners up with Crazy Horse to hunt down the albino buffalo. So it’s obviously based on fact, huh. The “white spike” is haunting Mr. Hickok’s dreams and so he has to kill it. Mr Horse needs to kill it because it gored his daughter to death and she cannot rest in the spirit world unless he does. Or something.
Although I make an exception for the great Dead Man, I dislike mumbo-jumbo Westerns. Quite good ones, like The Last Hunt (also about a white buffalo) or The Missing come close to being spoiled by stupid magic and hocus-pocus. The White Buffalo isn’t half as good as those movies and the mumbo-j. effectively sinks it.
Charles Bronson is Wild Bill. We are in 1874 and apparently Hickok, fresh from his appearances on the stage with Buffalo Bill, took the name James Otis and set off to the Dakotas by train to track down and kill the white buffalo that charges him in his nightmares. He is aging, has syphilis and his eyesight is failing. He wears cool shades. He wears long hair, dandy clothes and has two large pistols in the red sash around his waist. He was obviously traveling incognito.
.
. 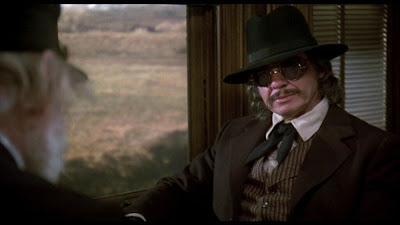 He looks so like Wild Bill
.
Amazingly, he is recognized and there is some bunkum about Tom Custer (Ed Lauter), the general’s brother, wanting to kill him. Still, it gives the excuse for a gunfight in which soldiers can be shot. Tom makes a run for it.
Will Sampson, a Creek, is Crazy Horse (renamed Worm until he kills the buff) and is quite good, as far as the script allows anyway.
.
. 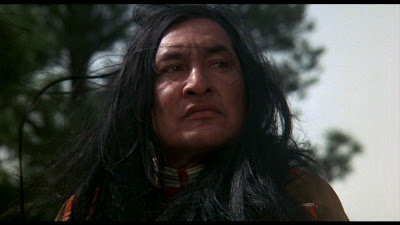 Crazy Horse aka Worm
.
One problem is the buffalo itself, which is too evidently in those pre-CGI days a lumbering mechanical device on hidden tracks with smoke blowing from its nostrils. The shark was scarier. Actually, it rather resembles a cuddly toy. They do all the charges in slo-mo, maybe to make it look more ‘realistic’ (because as we know buffalo always charge in slow motion) but all that does is give us more time to notice how fake the beast is. Maybe it was more impressive on the wide screen in a theater. Or maybe not.
.
. 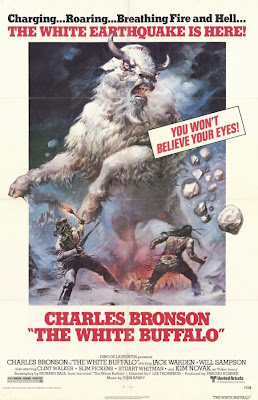 Rather like an angry lamb
.
The slogan on the posters was “You won’t believe your eyes!” Well, indeed, they were right, we didn’t.
The movie was expensively filmed in Colorado but a large amount is done in the studio and that looks even faker.
So I’m afraid it’s not awfully good. In fact it’s dire.

I suppose it doies have one or two points in its favor. There’s a scene in a crowded saloon where Bill and his old-timer pard, one-eyed Charlie Zane (Jack Warden, rather good) take on a band of hide-hunter toughs and blast them to hell. These toughs are the henchpersons of Whistling Jack Kileen, an excellent Clint Walker, meaner and heavier than usual and quite convincing. You wouldn’t want to tangle with Whistling Jack Kileen, though of course Wild Bill doesn’t mind.
.
. 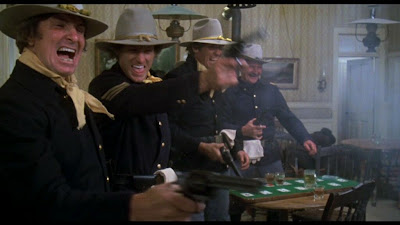 They seem to be having fun. I fear it won’t last.
.
We have good old Douglas Fowley as the train conductor in his last Western movie of 64 (and countless TV shows). Slim Pickens drives the stage and actually I think he is on the same run he was on in the remake of Stagecoach. They put an undertaker in the story and of course only John Carradine, typecast in that role, would do. Stuart Whitman (Marshal Crown from Cimarron Strip, is there, and Kim Novak, in her second Western of two, plays Poker Jenny with whom Bill declines to, er, canoodle on the grounds of the ‘dose’ he says one of Jenny’s ‘scarlet sisters’ gave him (her fault, obviously).
.
. 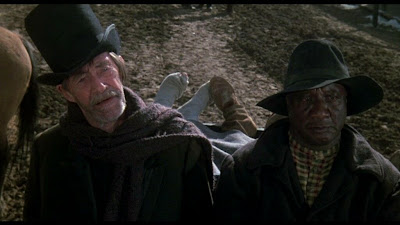 Cadaverous Carradine (left)
.
So there are a few familiar faces to enjoy.
But Englishman J Lee Thompson, the Guns of Navarone and King Solomon’s Mines fellow, couldn’t direct Westerns, as the other one he did, Mackenna’s Gold, also a turkey, proved.

Bronson made the movie as part of a contract with Dino De Laurentis, who didn’t understand Westerns, as was demonstrated by the other De Laurentis/Bronson one, Chino.

The White Buffalo movie justly bombed.
.
.
I would advise you to watch it only if you want a laugh.
.
PrevPreviousThe Three Burials of Melquiades Estrada (Europa Corp, 2005)
NextNo Country for Old Men (novel by Cormac McCarthy and Paramount movie, 2007)Next