A Farewell to the West – and the Western

Tumbleweeds was William S Hart’s last Western. Hart left Paramount in 1924, aged 60, disillusioned and unable to cope with the new breed of Western with young, dashing, showy cowboys like Tom Mix. Hart’s brand of authentic-look, rather staid picture was no longer fashionable. But he had one great project he still wanted to realize, a farewell to the old West called Tumbleweeds. The movie was to be centered on the April 1889 land rush following the opening of Oklahoma Territory to settlers. Huge epics had become all the rage but successes like The Covered Wagon (1923) and The Iron Horse (1924) were about the birth of the West and Manifest Destiny. Hart wanted to make an epic picture about what he saw as the closure of the frontier.
. 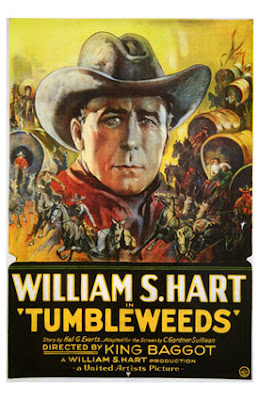 In the end he did a deal with United Artists, putting up $100,000 of his own money, and he produced the picture, with direction credited to King Baggot but also much managed by Hart himself. However, UA cut it so savagely that he sued them. He won but it took years and cost him half a million dollars.
.
. 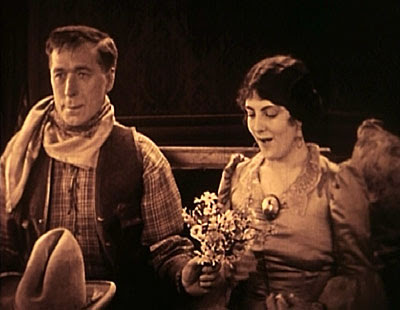 She doesn’t seem to mind the 40 years between them
.
In 1939 the movie was released again with a soundtrack of music and sound effects (but no spoken dialogue). Hart, by then aged 75, recorded a sound prologue at his Newhall ranch for it and this is the version available today on DVD. The prologue is over the top, sentimental and delivered with all the plumminess of John Gielgud, but it has a certain charm.
The film had the standard acting of the time, which we now regard as hopelessly melodramatic and old-fashioned. Lucien Littlefield, for example, as Hart’s sidekick Kentucky (a ‘comic’ sidekick was perhaps a rare concession to modernity), hams it up unmercifully. Things were simpler then and the characters did not have to be delineated subtly. Goodies were really good and the bad guys, boy, were they bad. 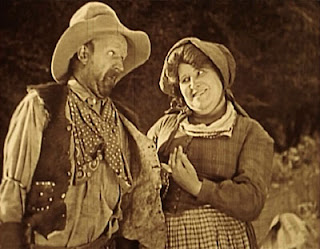 Comic sidekick Littlefield does his act

The chief badman is J Gordon Russell (27 Westerns, 1916 – 1930) and we know he must be bad because in his first appearance he is seen a beating a young boy. Actually, the boy has a puppy and when a man mistreats both a child and a puppy, well, he must be really bad. Of course, Hart dunks him in a water trough and makes him apologize to both boy and dog. In contrast, Hart is first seen rescuing two wolf cubs whose mother has been poisoned. When Hart meets a rattlesnake, he draws his gun instinctively but then says, “Go ahead an’ live. You’ve got a whole lot more right here than them that’s a comin’.” Heavy symbolism was Hart’s stock in trade.

The plot is a fairly standard one of ‘Sooners’, those crookedly forestalling the land rush to reserve prime land for themselves. Hart has fallen for the bad guy’s sister, the very Western-named Molly Lassiter (Barbara Bedford) but she still believes her Sooner brother until… Well, you get the idea. Actually, a certain amount of cradle-snatching is going on here because Bedford was 39 years younger than Hart but never mind. 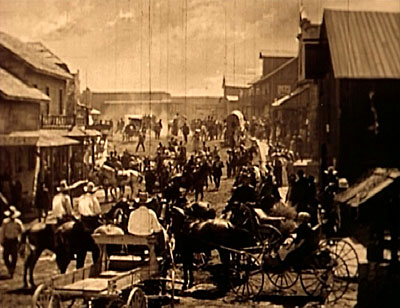 The settlers gather…
.
Hart aims to leave for pastures new in South America. “Women aren’t reliable–cows are–that’s why I’m headin’ for South America where there’s millions of ’em.” This is a standard Western trope: with the true West dying, a new frontier always beckons, be it California, Mexico or further south.
The inter-title dialogue cards use standard Owen Wister-style language of the “I’m sure fixin’ to plug that ornery sidewinder” kind.
.
. 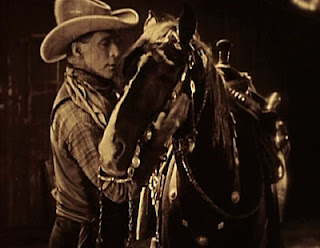 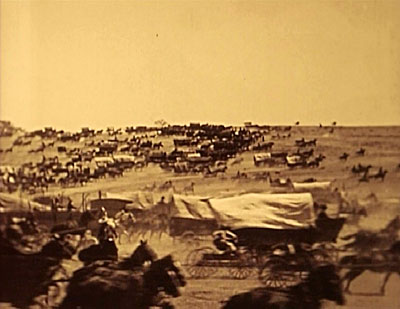 The rush
.
The great thing about this film, as indeed with all land-rush movies,  is the land-rush scene itself, which is really impressive as the owners of thousands of wagons and buggies and horses and even a penny-farthing bicycle (there’s always one of those) race to stake their claims.
A must for Western aficionados, this movie also makes a fun evening for normal human beings.