I reckon that Ed Harris in a bar one day grumbled, “They don’t make Westerns like they used to” and the person he was with, maybe it was Viggo Mortensen, said, “Well, hell, Ed, make one.”
Appaloosa is an excellent modern Western which has no pretensions to revisionism or artiness. It is ‘just’ a good telling of a good tale. Westerns these days are meticulous in their attention to detail, and the costumes and props are all just right. It really helps; it gives you faith in the credibility and shows respect. So well done to the props people and the costume persons and all the crew that work on that aspect.
.
. 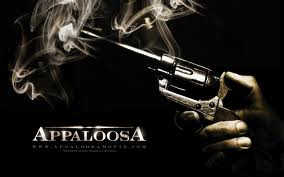 The smoking gun
.
And of course to Mr Harris. Because Ed Harris produced, directed, co-wrote and starred in this picture. Hell, he even sings a song at the end. Even if you (quite sensibly) are not an auteuriste, you’d be tempted to refer to this movie as ‘Ed Harris’s Appaloosa’.
The story tells of a pair of friends who do ‘gun work’ for a living, bringing a kind of law ‘n’ order to treed towns, because they are good at it and don’t really know what else to do. They go from place to place cleaning up the town. In this one they have to keep unscrupulous ranch boss Jeremy Irons locked in jail till the judge gets there. So it’s Warlock meets Rio Bravo. Harris and Viggo Mortensen (with his 8 gauge) as his partner are outstanding. They complement each other so well. They are friends to the core and the writing and directing shows that very well, as much by the silences as anything. Roger Ebert has justly compared their relationship to that of Gus McCrae and Woodrow Call in Lonesome Dove.
.
. 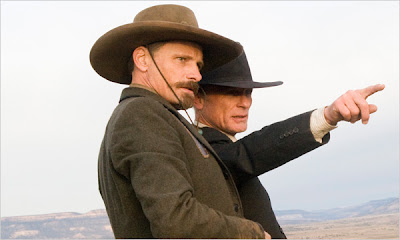 Friendship
.
Come to think of it, Tommy Lee and Bob would have made a good Virgil and Everett…
Jeremy Irons is very convincing as a tough rancher. I was going to say “convincing for an Englishman” but that would be unfair. There’s a good record of Brit actors making authentic Westerners – think of Stewart Grnger, Sean Connery and Christian Bale, to name but a few. Furthermore, there were plenty of English ranchers on the real frontier, like John Tunstall. In praise of Jeremy’s performance we would say that he makes a worthy opponent of Virgil and Everett.
.
. 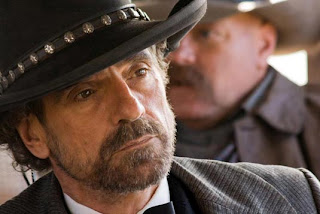 Irons: really good
.
Renée Zellwegger has an extremely difficult part. She has to play a fickle, promiscuous, disloyal coquette who is also human and sympathetic. Ms Zellwegger does well: she manages all but the last adjective but I don’t know that anyone could have achieved them all. I love her dreadful piano playing. The supporting actors are commendable too (Ariadna Gil, James Gammon & Timothy Spall especially). The judge is Mr Harris’s dad and rather good.
The gunplay is thrilling, there is a train hold-up, there are dangerous Apaches and fisticuffs in the saloon. Heck, what more do you want?
The gunfighter-marshal is called Virgil Cole and permutations of Cole/Virgil/Morgan are standard for a hero’s first or last names, especially if they are lawmen or gunmen. It’s a proper Western, alright. Viggo even rides off into the setting sun at the end. Yet the film manages all this without clichés, without disrespect to the genre.
Gun experts can learn from IMDb that “because the only remaining 8 gauge shotguns on the market were either too antique or too valuable to use, the movie’s armorer, Gibbons Ltd., had to specially contract for replicas. Gunsmith Steve Karnes purchased three replica Colt 1878 shotguns and modified the barrels so that all three sets would have bore sizes equal to that of a real 8 gauge shotgun. The first two shotguns were designed to fire full-load 12 gauge blank rounds (one gun could be used while the other was cleaned or repaired from a previous film shoot.) The third shotgun was designed to chamber 8 gauge inert rounds, and was used for reloading scenes. All three were then given identical, ‘aged’ finishes, to make them appear old and used.”
.
. 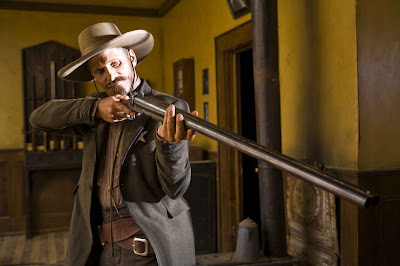 8-gauge
.
The film is visually attractive. Dean Semler (Dances with Wolves) was the photographer and it was filmed in Texas and round Santa Fe in New Mexico. There’s also nice music (Jeff Beal).
The San Francisco Chronicle review said, “In terms of tone, it falls somewhere between Silverado and the original 3:10 to Yuma. Fans of last year’s artsy and cerebral Jesse James movie will consider this a setback for the genre.” This is quite wrong. True Western fans (I speak proudly as one) love all four films.
There’s a very good screenplay, by Harris and Robert Knott, from the excellent novel by the late Robert B Parker. I love Parker’s books. I have read all the Spenser novels, twice. But his series of stories about Virgil and Everett (see here for our review of those) are splendid too. I have commented elsewhere (here, in fact) on the crossover between tough private eye and Western stories. They both deal in lead, friend. The ‘business’ of Virgil’s striving for vocabulary and using West Point-educated Everett as a dictionary is clever and amusingly done.
.
. 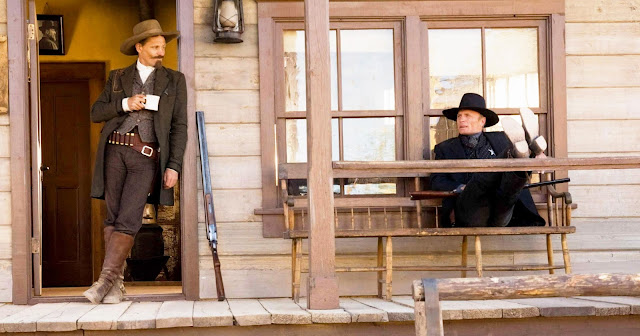 Like Henry Fonda on the Tombstone sidewalk
.
There are some excellent recent Westerns. But Appaloosa isn’t the post-modern shoot-em-up that the 2006 3:10 to Yuma was and it certainly isn’t the dark, probing Western that Eastwood’s masterpiece Unforgiven was. It isn’t that intellectual mood-piece The Assassination of Jesse James… either; it’s a timeless, straight-down-the-trail classic Western and all I can say is Hallelujah.
We most definitely need Harris and Mortensen back to make one of the Parker sequels. Five years have gone by, Mr Harris. Just a reminder.
.
. 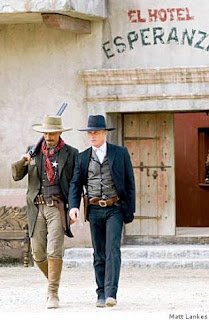