The Long Kill aka Outlaw Justice (Once Upon A Time, 1999)

.
.
Ideal for those who find the average Western TV movie too deep
.
.
There was a 1932 Hollywood Jack Hoxie talkie called Outlaw Justice but this Outlaw Justice is a made-for-TV epic showcasing country singers Travis Tritt, Waylon Jennings, Kris Kristofferson and Willie Nelson. Travis and Willie get a song.
It reunites Willie, Kris and Waylon from their 1986 made-for-TV Stagecoach but this time the Cashes aren’t there.
It’s a straight Tex-Mex revenge yarn. Waylon is written out rapido as he is shot down by the bad guy. Aging outlaws Kris and Willie, accompanied by ex-Sheriff Travis go off down to Mexico to shoot the assassin, who has so brutally slain their pal. They are accompanied by Waylon’s son (Chad Willett).
.
. 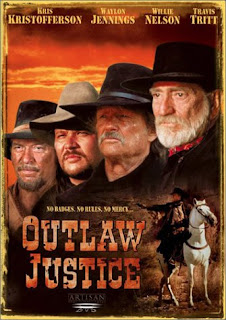 .
There’s no love interest (beyond a hinted-at dalliance by Willie when he lets his hair down, literally and figuratively, with a señorita). It’s a boy’s movie not a girlie one.
There are spaghetti influences. It was filmed in Spain and they don’t hide it: in the dialogue they agree to meet in Almeria. There’s a high body count. Kris has a saddle-cloth armory copied from Col. Mortimer’s.
There’s quite a lot of slo-mo. You have to avert your eyes at one point because Willie has a bath scene. The outlaws help rebuild a church burned out by the baddies: lucky there weren’t Hollywood angels on the soundtrack or you’d have thrown up at that point.
.
.

.
After they have shot the Mexican town up and disposed of the bad guy, the Mexican soldiers let them go, despite the fact that the corpses of their comrades litter the plaza.
I have only seen it on TV with dubbed French soundtrack but the voices are done quite well and anyway it’s an action movie rather than a talking one. The writing is pretty clunky, though there are one or two good lines, at least judging by the Froggy dialogue.
Willie was involved in quite a few TV Westerns, either doing the soundtrack or acting, occasionally (as in Stagecoach) producing. Kris, if course, had starred as Billy with Pat Garrett & Billy the Kid (1973), though even then he was a slightly geriatric kid. He had also appeared briefly in Peckinpah’s semi-Western Alfredo Garcia as the biker trash and in 1980 had a lead part in the gigantic turkey Heaven’s Gate. So he was quite a serious Westerner. After that, though, it was more or less the same as Willie: TV shows. Though he was excellent in Lone Star in 1996, if you count that a Western.
Waylon did a few Westerns. You may remember his brief appearance on the riverboat in the 1994 Maverick movie. Travis wasn’t such a specialist; he’d featured with Kenny Rogers in the TV Rio Diablo in 1993, was in an episode of Dr Quinn, Medicine Woman in 1996 and then this mighty epic, The Long Kill.
Sancho Garcia as the villain Holden is wooden. I hope he hadn’t the nerve to name himself after William.
This is a must-see if you are a country fan. Otherwise it’s quite amusing but nothing more. Aging cowboys may go down to Mexico and have a shoot-out but The Wild Bunch it ain’t. Willie looks best in his Prince Albert frock coat. Kris acts tough, all in black. Waylon doesn’t have time to convince (or not). Travis has that extraordinary hair. I kinda missed Johnny. As A Gunfight had proved, he was a damn good Western actor.
.
PrevPreviousThe Proposition (UK Film Council et al, 2005)
NextLone Star (Columbia, 1996)Next