The Quick and the Dead (Columbia TriStar, 1995)

.
.
Not very good
.
.
The Quick and the Dead with its double meaning and slightly biblical sound is naturally a great title for a Western. Louis L’Amour had used it for his 1973 tale of Duncan McKaskel and the mysterious stranger Con Vallian, which was filmed for TV in 1987 with Tom Conti and Sam Elliott in the leads. It was also the name of a Robert Totten-directed 1963 movie about a bunch of GIs in 1944 Italy, and a 1970 sci-fi TV show. It is perhaps surprising that more Westerns weren’t made with the title. But then I guess after the 1995 fiasco, who would want to?
The movie was no cheap throw-away. It had no fewer than four big stars in the shape of a post-Unforgiven Gene Hackman, a post-Basic Instinct Sharon Stone, a pre-Titanic but still well-known Leonardo di Caprio (looking about 12) and a similarly up-and-coming Russell Crowe, whom co-producer Stone particularly wanted.
It also had some good character actors such as Woody Strode (in his last film) and Pat Hingle. It was directed by Sam Evil Dead Raimi (his only Western, probably just as well). It was budgeted at $32m (and grossed about 40 cents).
.
. 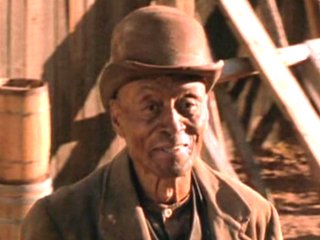 .
Maybe, too, the movie had some worthy notions of redressing the macho balance and having a (sexy) woman star as a gunfighter. Not that that idea was new, of course. Jane Russell in Son of Paleface had already appeared in pants and low-slung gunbelts way back in 1952. But that was a slightly camp classic. The idea here was (we presume) serious, Lord help us.
The plot is the well-worn and absurd one of a quick-draw contest in a town. The producers and writers had probably watched the ho-hum Alan Ladd Western One Foot in Hell (1960) and the rather good Kirk Douglas/Johnny Cash picture A Gunfight (1971) and decided to ‘update’ it.
.
. 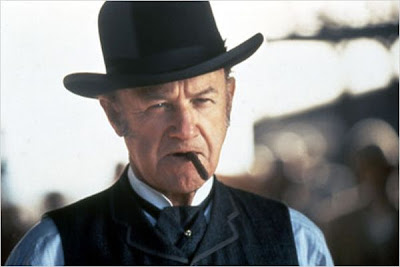 .
Gene Hackman (whose name is Herod, ha ha) is the cruel, despotic town boss who organizes an annual knock-out tournament of gunfighters who use his town as a Colosseum to fight to the death for a money prize. Day after day, as the town clock strikes twelve, gladiator after gladiator is dispatched. It’s High Noon again and again, missing only the quality. Serial killings thus replace dramatic development and the story is iterative, to say the least. Hackman is of course the fastest on the draw and intends to win.
.
. 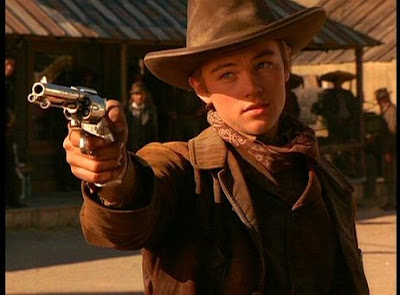 .
His son, cocky Leonardo di Caprio, however, reckons he can beat him, although why father and son might want to enter a contest which only one of them will survive is not explained beyond a cursory sub-Oedipal estrangement. Crowe is a reformed gunslinger, now preacher, who won’t fight.
.
. 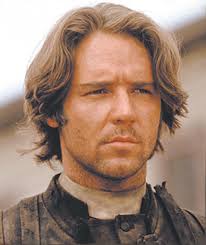 And la Stone comes to town in ultra-tight leather pants to revenge her dead daddy, in a reference to the inflated Hollywood-spaghetti Once Upon a Time in the West (1968) which itself, of course, was more referential than reverential of the Western genre. Stone seems to have taken Clint Eastwood in his most spaghetti-grunting period as her model. Really, she is well named. 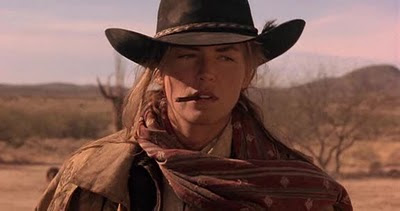 .
That’s the plot, such as it is. The quick-draw Main Street showdown myth (because of course it was only ever a myth) is taken to absurd extremes, stupidly, bloodily and boringly. Not that treating myth itself is a criticism: that’s what Westerns are. But you need to do it with flair, subtlety and respect for the genre. All three ingredients are glaringly absent here.
There’s a literal leitmotif of a hole of light. We see it early on as the sun shines through a bullet hole in Sharon’s hat brim and later we see through various characters’ bodies as a bullet punctures a hole right through them and we glimpse daylight behind. Actually, we see through these characters in more ways than one.
Dante Spinotti (the Last of the Mohicans guy) did the cinematography. Some of it is actually quite good. I liked the lowering skies.
You can see why Hackman would have signed up: $$$$$. Stone maybe thought it would be a showcase for her talents (though she never acted well in anything until Casino). Di Caprio and Crowe were perhaps flattered and willing to take anything Hollywood. Maybe Crowe was practicing for Gladiator. But really, shame on you, Gene. How could you do a Western as fine as Unforgiven and then appear in this junk? Oh well, it’s a free country I guess.
I suppose that Mr Raimi thought he was making a tongue-in-cheek parody. However, tongue-in-cheek parodies and second rate trash aren’t the same thing at all. I’m probably being a bit harsh here. I know some people like it. Time Out called it an “engagingly hyperbolic homage to the style and revenge fantasies of the spaghetti Western” and said it was “terrific fun”. Well, if you say so. There is an element of jokey post-modernist send-up about it. But it totally lacks Tarantino’s flip cool. It doesn’t come off as homage, parody, post-spaghetti, a comic book, straight Western or anything else. It’s just a flop. It comes on TV quite often but I don’t even watch it anymore and I can’t think of a Western I’d less like to have on DVD.
Still, there are a couple of derringers in it.
.
PrevPreviousBroken Trail (Butcher’s Run Films, 2006)
NextThe Battle at Apache Pass (Universal, 1952)Next