Once Fox’s had shown us in 1950 a statesmanlike Cochise making peace despite stupid racist white bigots, pro-Indian movies became de rigueur. Some of them were poor, some patronizing but still they were a welcome corrective.
.
. 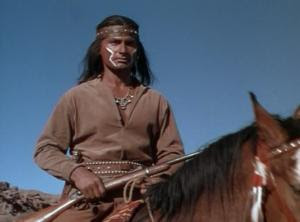 Jeff Chandler, Cochise (three times)
.
Playing opposite James Stewart as Tom Jeffords, burly New Yorker Jeff Chandler had impressed everyone as Cochise (for of course in those days it was white men and women who played the lead Indian parts). The real Cochise was, by all accounts, tall and strongly built, so the physical aspect was appropriate, and as we have no reliable photographic likeness of the Apache chief, for a white man Jeff could pass as possible. Universal snaffled him up to reprise the role in their George Sherman-directed cavalry Western, a kind of prequel, The Battle at Apache Pass.
.
. 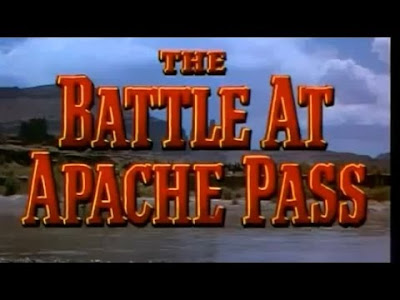 Solid cavalry Western
.
George Sherman made no fewer than 86 Westerns from 1935 to 1971. Manywere second-feature programmers. In fact his last picture, the big Wayne vehicle Big Jake, was about the nearest he got to a big-budget A-film and by then, poor man, he was pretty well out of it and Wayne did much of the real direction himself. But he was a fixture of the film Western and deserves at the very least a long-service medal. Some of his Westerns were actually really soid. One good thing: his movies were nearly always pro-Indian.
The story was written by Gerald Drayson Adams, who was also to write a couple of the TV Broken Arrow episodes as well as the later (and rather weaker) picture Taza, Son of Cochise (Universal, 1954). In The Battle at Apache Pass he does a sound job. It’s a solid cavalry Western with no Fordian flair but with action, plot and character.
It’s 1861. We open with Geronimo, who usually figures in Cochise movies. We see Jay Silverheels in a splendid necklace made of large brass shell cases. He despises Cochise as a peace-maker, no better than a woman. He attempts to suborn Cochise’s young brother Little Elk (Tommy Cook) away from the peace pipe and onto the warpath. Actually, I think Cochise’s brother was named Coyuntwa but never mind. Maybe Coyuntwa is the Apache for a small elk, who knows.
The plot is really the Bascom Affair, when a stupid and inexperienced US 7th Infantry Lt. Bascom did not honor the terms of a white-flag parley and tried to arrest Cochise, whom he wrongly believed responsible for the kidnap of a white farmer’s stepson, Felix Ward. Cochise escaped by slashing the tent wall with his knife but Bascom held Coyuntwa and other captives, including two of Cochise’s nephews, as hostages. Cochise attacked some Americans and took three hostages whom he offered to exchange for his family. Bascom stupidly refused, Cochise attacked the soldiers and was driven off. Both sides killed their hostages and it was war, an unnecessary war provoked by incompetence.
All this is documented and the movie adheres surprisingly well to the historical fact (surprisingly well for a Hollywood Western).
The ‘goodies’, slightly less historical, are two wise US Army men, Major Colton (John Lund, in his first Western) and Sergeant Bernard (Richard Egan). Both are good, Egan very good. Then by-the-book Bascom (John Hudson) arrives and wrecks the delicate equilibrium in two seconds flat.
.
. 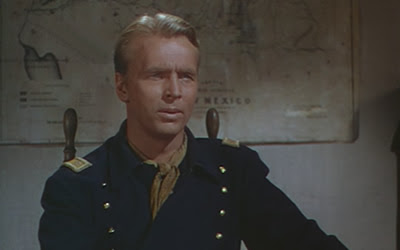 Major Colton (John Lund), good guy
.
There is also a corrupt and criminal Indian agent played by Bruce Cowling who goes by the name of Baylor. Now John Baylor (1822 – 94) was the Confederate soldier who annexed Arizona and New Mexico north and south along the 34th parallel rather than the east-west division desired by Washington, won the battle of Mesilla and declared himself Governor. In the movie, Baylor is said by his sleazy henchman to be aiming to be Governor. But I don’t think it’s the same guy: he does not survive his attempt to go over to Geronimo. Serves him right, the skunk.
However, good news, Western fans: the Sleazy Henchman in question is played by Jack Elam! Jack is appropriately slovenly and reprobate as Mescal Jack, a mangey old scout who sells booze to the Indians. He is skinny and stooped. One-Reel Jack actually survives into the 58th minute of this 81-minute picture. Pretty good going. But then he comes to a sticky end at the hands of Cochise. Chandler, how could you?
.
. 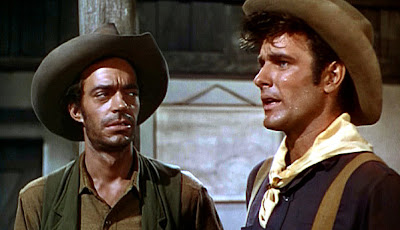 Mescal Jack Elam with Corporal James Best
.
We have Mrs Cochise, Nono, attractive Susan Cabot. She had been an Indian again in Tomahawk (another George Sherman picture) with Van Heflin and was to become Audie Murphy’s regular Western squeeze. She’s rather good. The good whites save her with expert medical care and deliver her new-born babe, presumably Taza. And we have to have a white woman, of course. That’s copper-haired Beverly Tyler (four big-screen Westerns and some TV shows) as Mary Kearney, sweet schoolteacher. She’s elegant in her blue cavalry blouse and big yellow scarf. Nono thinks Mary might be a rival but then Cochise reassures her and the two women do some female bonding.
Who else? Oh yes, Hugh O’Brian is Lt. Harley. Small part but it’s Hugh alright. He was also in Taza. And James Best is a good corporal.
.
. 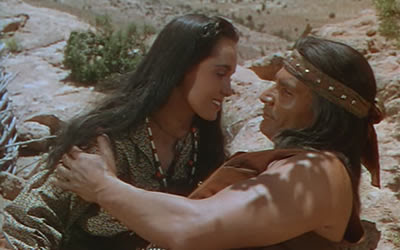 Susan Cabot is an Indian maid. Again.
.
The film is visually pleasing, with Charles Boyle cinematography of the Arches National Monument, Moab, UT locations. There are a couple of notable shots, such as the shadows of the Indians Bascom has hanged.
The battle is good, with the howitzers blasting away. And quite accurate too, considering, although there is no Col. Carleton.
.
. 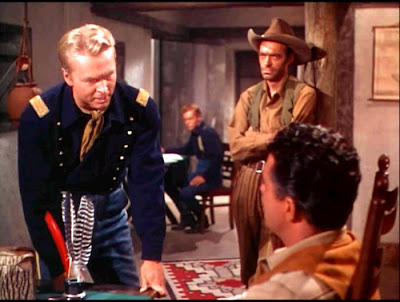 Good guy Lund gives it straight to bad guys Elam and Cowling
.
It all climaxes with a rather unhistorical Cochise/Geronimo knife fight when Geronimo is defeated but Cochise spares his life and sends him off as an outcast. And Major Colton and Cochise make peace right after the Battle of Apache Pass. Oh well, you can’t expect too much History. It’s not a documentary after all.
Anyway, all in all I think it’s rather good.

PrevPreviousThe Quick and the Dead (Columbia TriStar, 1995)
NextCochise in fact and fictionNext

PrevPreviousThe Quick and the Dead (Columbia TriStar, 1995)
NextCochise in fact and fictionNext
Jeff Arnold © 2023 – All rights reserved – Designed by BetterCallChris
Scroll Up